A breathtaking stone tool cache unearthed in the Boulder city limits that contains elaborate stone knives and blades used to butcher ice-age mammals 13,000 years ago is going on exhibit at the University of Colorado Museum of Natural History Oct. 9.

Discovered by a landscaping crew digging a fishpond in the yard of a Boulder home in 2008, the 83-piece tool cache was packed in a space about the size of a shoebox under two feet of soil, apparently untouched for millennia. The tools were discovered in the yard of Boulder homeowner Patrick Mahaffy, who is loaning them to the CU Museum as the centerpiece of the new exhibit, “Unearthed: Ancient Life in the Boulder Valley.”

CU-Boulder Professor Douglas Bamforth, who has been studying the tools for several years, said they were left behind for reasons unknown by nomadic hunter-gatherers. Protein residue tests on the tools, collectively known as the Mahaffy cache, showed two of the bifacial knives were used to cut up American camels and horses, which went extinct at the end of the last ice age. Residue of ancient bear and sheep protein was found on two other Mahaffy cache tools, he said.

Following the 2008 discovery, Mahaffy contacted Bamforth, who specializes in the archaeology of the Great Plains, including its earliest inhabitants.

“When I first saw the tools, I was astonished,” said Bamforth. “It looked like someone gathered together some of their most spectacular tools and other ordinary scraps of potentially useful material and stuck them all into a small hole in the ground, fully expecting to come back at a later date and retrieve them.”

Bamforth immediately recognized that some quartzite and chert materials in the cache had come from several different areas he had visited while conducting research, including the Uinta Mountains in northeast Utah, the Green River Basin in northwest Colorado and southwest Wyoming, and Middle Park near Kremmling, Colorado. He concluded the Mahaffy cache likely originated in the Uintas, was carried up the Yampa River Valley in Colorado, then through the Gore Range and into Middle Park.

From there, the cache -- which could have changed hands along the way -- probably was toted to the Colorado River headwaters and over a pass in or near present-day Rock Mountain National Park, and up and over to the Front Range.

“The tools are almost pristine,” Bamforth he said. “The simplest explanation is that these people made the trip to present-day Boulder in one shot, perhaps in a month, without stopping along the way.” They may have been carried in a hide bag, he speculated.

“The University of Colorado Museum of Natural History is grateful to the Mahaffy family for making the cache available to the public for the first time,” said CU Museum Assistant Director Sharon Tinianow. “This amazing collection of tools connects us with the people who used them, a long time ago, right here in Boulder.”

Climatic evidence indicates Boulder was cooler and wetter 13,000 years ago during in the late Pleistocene epoch and receding glaciers would have been prominent along the Front Range of Colorado. The Mahaffy cache burial site appears to be on the edge of an ancient drainage that ran northeast from Boulder’s foothills, said Bamforth.

In addition to camels and horses, the landscape in present-day Colorado 13,000 years ago was home to now-extinct saber-toothed cats, wooly mammoths, dire wolves, short-faced bears, wooly rhinos, and giant ground sloths. While scientists have speculated these and other ice-age mammals may have disappeared as a result of overhunting, climate change or even the explosion of a wayward asteroid, the reasons remain unresolved, Bamforth said.

The Mahaffy cache -- which includes elegantly crafted, salad plate-sized bifacial knives, a tool resembling a double-bitted axe and a number of smaller blades -- is one of a handful of artifact collections known as Clovis caches, named after a particular tool style used by one of the oldest known groups of New World Paleo-Indians. Mahaffy is the CEO of a Boulder-headquartered biotechnology company he founded in 2009 named Clovis Oncology in honor of the cache.

“It’s highly evocative to imagine these tools in the hands of ancient people chasing down prehistoric mammals,” said Mahaffy. “Making them accessible to the public will allow more people to be fascinated by them, and to wonder about the first humans wandering in this area.”

The protein residue tests on the Mahaffy cache were undertaken in the lab of Professor Robert Yohe of California State, Bakersfield. Protein residue on the artifacts was tested against various animal anti-sera, a procedure similar to standard allergy tests and which can narrow positive reactions down to specific mammalian families, said Bamforth. The study was the first to identify protein residue on a Clovis-age tool from camel and only the second to identify horse protein residue.

The Mahaffy cache was unearthed with a shovel by a landscaping crew headed by Brant Turney.

“There is a magic to these artifacts,” said Mahaffy. “One of the things you don't get from just looking at them is how incredible they feel in your hand -- they are almost ergonomically perfect and you can feel how they were used. It is a wonderful connection to the people who shared this same land a long, long time ago.”

The CU Museum will host a free “Stone Age Fair” from 10 a.m. to 4 p.m. Saturday, Oct. 10, in conjunction with the new Mahaffy cache exhibit. The event will include flint-knapping demonstrations, as well as hands-on activities like atlatl-throwing, fire-starting and other skills required by the ancient people who inhabited the Boulder Valley.

The CU Museum exhibit, “Unearthed: Ancient Life in the Boulder Valley,” is expected to be on display for at least one year, said Tinianow. 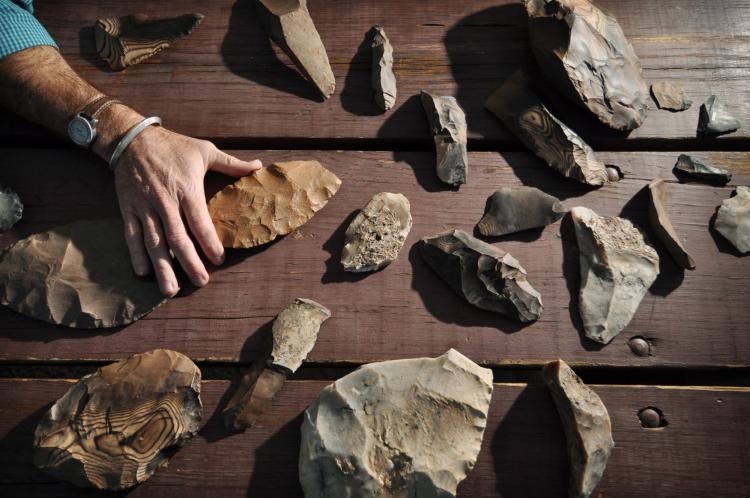 “When I first saw the tools, I was astonished,” said CU-Boulder professor Doug Bamforth. “It looked like someone gathered together some of their most spectacular tools and other ordinary scraps of potentially useful material and stuck them all into a small hole in the ground, fully expecting to come back at a later date and retrieve them.”
Return to the top of the page