The humble dust collecting in the average American household harbors a teeming menagerie of bacteria and fungi, and as researchers from the University of Colorado Boulder and North Carolina State University have discovered, it may be able to predict not only the geographic region of a given home, but the gender ratio of the occupants and the presence of a pet as well.

The new findings, which were published today in the journal Proceedings of the Royal Society B, highlight the impressive amount of microbial diversity in the average household and the degree to which these organisms can tell a story about the homes they inhabit.

“Every day, we’re surrounded by a vast array of organisms in our homes, most of which we can’t see,” said Noah Fierer, an Associate Professor in the Department of Ecology and Evolutionary Biology at CU-Boulder and a co-author of the study. “We live in a microbial zoo, and this study was an attempt to catalog that diversity.”

The study examined roughly 1,200 homes across the continental U.S. Volunteers participating in the Wild Life of Our Homes citizen science project helped researchers collect indoor and outdoor dust samples at each site. (Read more about the public science effort behind this study here.)

On average, each home contains more than 5,000 different species of bacteria and around 2,000 species of fungi. Fungal communities tend to be more predictive of a home’s location while bacterial communities provide clues about the identity of its residents.

“Geography is the best predictor of fungi in your home,” said Fierer, who is also a research fellow at the Cooperative Institute for Research in Environmental Sciences (CIRES) at CU-Boulder. “The reason is that most fungi blow in from outdoors via soil and leaves,” he said, noting that a home in the upper Midwest, for instance, will harbor distinct fungi compared to a home in the Southeast.

When it comes to bacteria, however, where you live may be less important than whom you live with. From the dust samples, researchers could confidently predict which homes had pets such as cats or dogs and, to a slightly lesser extent, the gender ratio of the residents. Homes with only male occupants, for example, will have a different bacterial makeup than those with both male and female occupants.

“One of the key takeaways is that if you want to change what you breathe inside your house, you would either have to move very far away or change the people and the pets you live with,” said Albert Barbarán, a graduate researcher in CU-Boulder’s Department of Ecology and Evolutionary Biology and lead author of the study.

The findings may have future implications for forensic investigations and allergen research.

The National Science Foundation provided funding for the research, with additional support from the A.P. Sloan Microbiology of the Built Environment Program and the Personal Genomes Project. 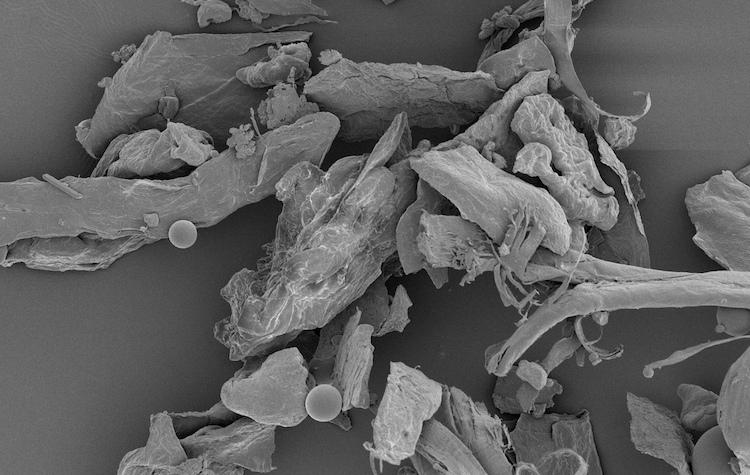 Household dust under a microscope. Photo by NIAID.

“One of the key takeaways is that if you want to change what you breathe inside your house, you would either have to move very far away or change the people and the pets you live with,” said Albert Barbarán, a graduate researcher in CU-Boulder’s Department of Ecology and Evolutionary Biology and lead author of the study.
Categories:

A collaborative study, including CU Boulder associate professor Andrew McAdam, investigates how the risks and rewards of red squirrel reproduction are a microcosm of evolutionary patterns. END_OF_DOCUMENT_TOKEN_TO_BE_REPLACED

What happens when an expert on natural language processing asks a chatbot to write a children's book in the style of Dr. Seuss? Professor Kai Larsen put the question to the test. END_OF_DOCUMENT_TOKEN_TO_BE_REPLACED

A model of your very own kidney made entirely from soft and pliable polymers? Researchers at two CU campuses are on the cusp of 3D printing realistic replicas of human anatomy. END_OF_DOCUMENT_TOKEN_TO_BE_REPLACED
Return to the top of the page