A team of researchers has developed a wireless device the width of a human hair that can be implanted in the brain and activated by remote control to deliver drugs.

The technology, demonstrated for the first time in mice, one day may be used to treat pain, depression, epilepsy and other neurological disorders in people by targeting therapies to specific brain circuits, according to researchers at Washington University School of Medicine in St. Louis, the University of Illinois at Urbana-Champaign and the University of Colorado Boulder.

The research is a major step forward in pharmacology and builds on earlier work in optogenetics, a technology that makes individual brain cells sensitive to light and then activates those targeted populations of cells with flashes of light. Because it’s not yet practical to re-engineer human neurons, the researchers made the tiny wireless devices capable of delivering drugs directly into the brain, with the remote push of a button.

“In the future, it should be possible to manufacture therapeutic drugs that could be activated with light,” said co-principal investigator Michael R. Bruchas, associate professor of anesthesiology and neurobiology at Washington University. “With one of these tiny devices implanted, we could theoretically deliver a drug to a specific brain region and activate that drug with light as needed. This approach potentially could deliver therapies that are much more targeted but have fewer side effects.”

The study will be published online July 16 in the journal Cell and appear in the July 30 print issue.

The new devices ultimately may help people with neurological disorders and other problems, according to co-first authors Jae-Woong Jeong, a former postdoctoral researcher at the University of Illinois and now assistant professor of electrical, computer and energy engineering at the University of Colorado Boulder, and Jordan G. McCall, a graduate student in the Bruchas lab.

“Now, we literally can deliver drug therapy with the press of a button,” McCall said. “We’ve designed it to exploit infrared technology, similar to that used in a TV remote. If we want to influence an animal’s behavior with light or with a particular drug, we can simply point the remote at the animal and press a button.”

Jeong added; “The device embeds microfluid channels and microscale pumps, but it is soft like brain tissue and can remain in the brain and function for a long time without causing inflammation or neural damage.”

As part of the study, the researchers showed that by delivering a drug to one side of an animal’s brain, they could stimulate neurons involved in movement, which caused the mouse to move in a circle.

In other mice, shining a light directly onto brain cells expressing a light-sensitive protein prompted the release of dopamine, a neurotransmitter that rewarded the mice by making them feel good. The mice then returned to the same location in a maze to seek another reward. But the researchers were able to interfere with that light-activated pursuit by remotely controlling the release of a drug that blocks the action of dopamine on its receptors.

The researchers also believe that similar, more flexible devices could have applications in areas of the body other than the brain, including peripheral organs.

“We’ve successfully produced and demonstrated an implantable, cellular-scale microfluidic and micro-optical interface to biology, with application opportunities not only in the brain but in other parts of the nervous system and other organs as well,” said the study’s other co-principal investigator, John A. Rogers, professor of materials science and engineering at the University of Illinois.

For now, the devices contain only four chambers for drugs, but in the future, the researchers hope to incorporate a design much like a printer’s ink cartridge so that drugs can continue to be delivered to specific cells in the brain, or elsewhere in the body, for as long as required without the need to replace the entire device. 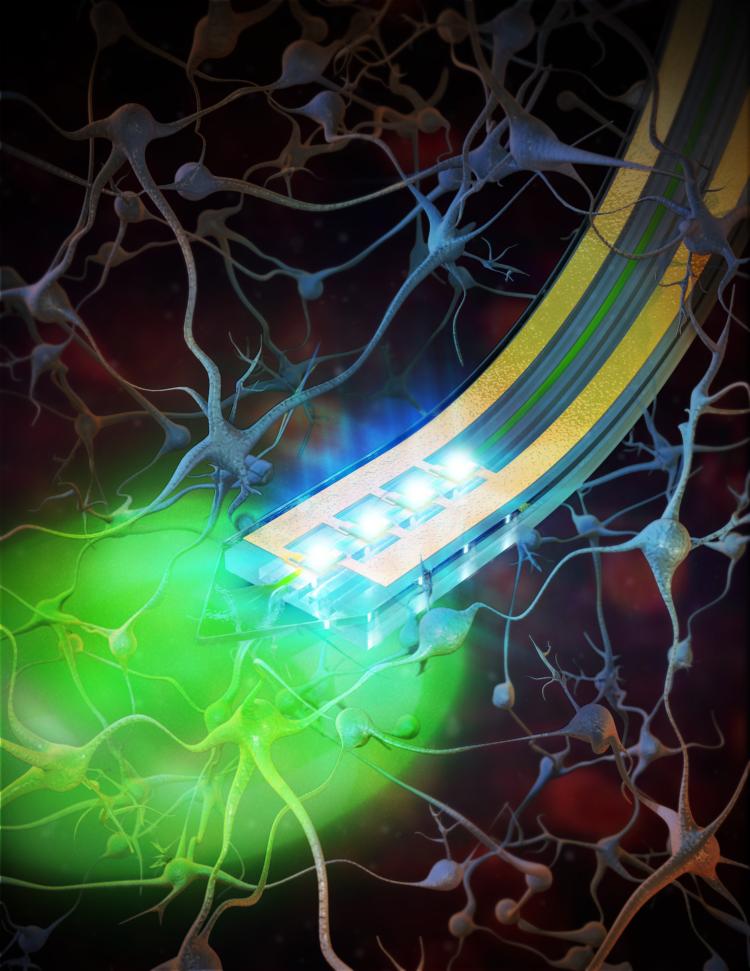 Artist's rendering by Alex David Jerez Roman showing tiny, implantable devices that are capable of delivering light or drugs to specific areas of the brain, potentially improving drug delivery to targeted regions of the brain and reducing side effects.

“In the future, it should be possible to manufacture therapeutic drugs that could be activated with light,” said co-principal investigator Michael R. Bruchas, associate professor of anesthesiology and neurobiology at Washington University.
Categories:

A Department of Energy award will help accelerate research into flow batteries, which will help make the electricity grid more reliable and sustainable. END_OF_DOCUMENT_TOKEN_TO_BE_REPLACED

CIRES fellow and Associate Professor Jennifer Kay discusses the influence of Syukuro “Suki” Manabe, who this week was named a Nobel Prize laureate in physics. END_OF_DOCUMENT_TOKEN_TO_BE_REPLACED
Return to the top of the page