In another advance at the far frontiers of timekeeping by National Institute of Standards and Technology and University of Colorado Boulder researchers, the latest modification of a record-setting strontium atomic clock has achieved precision and stability levels that now mean the clock would neither gain nor lose one second in some 15 billion years—roughly the age of the universe.

Precision timekeeping has broad potential impacts on advanced communications, positioning technologies (such as GPS) and many other technologies. Besides keeping future technologies on schedule, the clock has potential applications that go well beyond simply marking time. Examples include a sensitive altimeter based on changes in gravity and experiments that explore quantum correlations between atoms.

As described in Nature Communications, the experimental strontium lattice clock at JILA, a joint institute of NIST and CU-Boulder located on the CU campus, is now more than three times as precise as it was last year, when it set the previous world record. Precision refers to how closely the clock approaches the true resonant frequency at which the strontium atoms oscillate between two electronic energy levels. The clock's stability—how closely each tick matches every other tick—also has been improved by almost 50 percent, another world record.

The JILA clock is now good enough to measure tiny changes in the passage of time and the force of gravity at slightly different heights. Einstein predicted these effects in his theories of relativity, which mean, among other things, that clocks tick faster at higher elevations. Many scientists have demonstrated this, but with less sensitive techniques.

"Our performance means that we can measure the gravitational shift when you raise the clock just 2 centimeters on the Earth's surface," JILA/NIST Fellow Jun Ye says. "I think we are getting really close to being useful for relativistic geodesy." Ye also is an adjoint professor of physics at CU-Boulder.

Relativistic geodesy is the idea of using a network of clocks as gravity sensors to make precise 3D measurements of the shape of the Earth. Ye agrees with other experts that, when clocks can detect a gravitational shift at 1 centimeter differences in height—just a tad better than current performance—they could be used to achieve more frequent geodetic updates than are possible with conventional technologies such as tidal gauges and gravimeters.

In the JILA/NIST clock, a few thousand atoms of strontium are held in an "optical lattice," a 30-by-30 micrometer column of about 400 pancake-shaped regions formed by intense laser light. JILA and NIST scientists detect strontium's "ticks" (430 trillion per second) by bathing the atoms in very stable red laser light at the exact frequency that prompts the switch between energy levels.

The JILA group made the latest improvements with the help of researchers at NIST's Maryland headquarters and the Joint Quantum Institute (JQI). Those researchers contributed improved measurements and calculations to reduce clock errors related to heat from the surrounding environment, called blackbody radiation. The electric field associated with the blackbody radiation alters the atoms' response to laser light, adding uncertainty to the measurement if not controlled.

To help measure and maintain the atoms' thermal environment, NIST's Wes Tew and Greg Strouse calibrated two platinum resistance thermometers, which were installed in the clock's vacuum chamber in Colorado. Researchers also built a radiation shield to surround the atom chamber, which allowed clock operation at room temperature rather than much colder, cryogenic temperatures.

"The clock operates at normal room temperature," Ye notes. "This is actually one of the strongest points of our approach, in that we can operate the clock in a simple and normal configuration while keeping the blackbody radiation shift uncertainty at a minimum."

In addition, JQI theorist Marianna Safronova used the quantum theory of atomic structure to calculate the frequency shift due to blackbody radiation, enabling the JILA team to better correct for the error.

Overall, the clock's improved performance tracks NIST scientists' expectations for this area of research, as described in "A New Era in Atomic Clocks" at www.nist.gov/pml/div688/2013_1_17_newera_atomicclocks.cfm. The JILA research is supported by NIST, the Defense Advanced Research Projects Agency and the National Science Foundation. 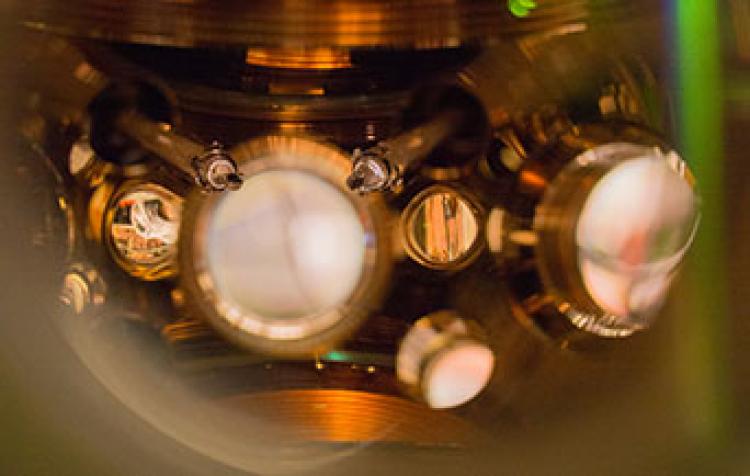 JILA's strontium lattice atomic clock now performs better than ever because scientists literally "take the temperature" of the atoms' environment. Two specialized thermometers, calibrated by NIST researchers and visible in the center of the photo, are inserted into the vacuum chamber containing a cloud of ultracold strontium atoms confined by lasers. Credit: Marti/JILA

When SpaceX CRS-23 launched to the International Space Station on Aug. 29, it carried with it a milestone for CU Boulder: the 80th mission to carry a payload from BioServe Space Technologies. END_OF_DOCUMENT_TOKEN_TO_BE_REPLACED

From diving Neanderthals to saliva-based COVID-19 tests, we remember the year in research at CU Boulder. END_OF_DOCUMENT_TOKEN_TO_BE_REPLACED

Astronaut ice cream—the crunchy, freeze-dried, pale imitation of the real thing—may have met its match: The International Space Station is getting a real freezer. END_OF_DOCUMENT_TOKEN_TO_BE_REPLACED
Return to the top of the page