After successful mission to Mercury, spacecraft on a crash course with history

NASA’s MESSENGER mission to Mercury carrying an $8.7 million University of Colorado Boulder instrument is slated to run out of fuel and crash into the planet in the coming days after a wildly successful, four-year orbiting mission chock full of discoveries.

The mission began in 2004, when the MESSENGER spacecraft launched from Florida on a seven year, 4.7 billion mile journey that involved 15 loops around the sun before the spacecraft settled in Mercury’s orbit in March 2011. Since then the Mercury Atmospheric and Surface Composition Spectrometer (MASCS), built by CU-Boulder’s Laboratory for Atmospheric and Space Physics, has been making measurements of Mercury’s surface and its tenuous atmosphere, called the exosphere.

“The spacecraft is finally running out of fuel, and at this point it’s just sort of skimming the planet’s surface,” said Senior Research Scientist William McClintock of LASP, the principal investigator of the MASCS instrument for the mission. It could crash onto Mercury’s surface or run into towering cliff-like features known as scarps that are evidence of a planet-wide contraction as the object cooled, he said.

“A lot of people didn’t give this spacecraft much of a chance of even getting to Mercury, let alone going into orbit and then gathering data for four years instead of the original scheduled one-year mission.” said McClintock. “In the end, most of what we considered to be gospel about Mercury turned out to be a little different than we thought.”

Mercury is about two-thirds of the way closer to the sun than Earth and has been visited by only one other spacecraft, NASA’s Mariner 10, in 1974 and 1975. About half the size of a compact car, MESSENGER is equipped with a large sunshade and is toting a camera, a magnetometer, an altimeter and four spectrometers.

One surprise to the CU-Boulder scientists was the behavior of the thin, tenuous atmosphere of Mercury known as the exosphere. “We thought the exosphere would be highly variable and episodic, and we discovered quite the opposite,” said McClintock. “We found it was very seasonal, like our climate on Earth. We saw the same patterns year after year, which was a big surprise.”

A number of wild discoveries have come from the MESSENGER mission: Mercury may have as much as 1 trillion metric tons of ice tucked in the dark recesses of its craters, despite its 800 degree Fahrenheit surface temperatures; dust from comets may have painted its surface dark with carbon; some of its craters were once filled with lava; it has a lopsided magnetic field and a gigantic iron core.

Despite the large iron core, very little of the element was found on the surface, said Greg Holsclaw, a LASP researcher who helped develop the MASCS instrument. “Despite clear evidence of volcanic activity, the abundance of iron was found to be very low,” he said. “This, combined with the presence of materials that vaporize at relatively low temperatures, indicates Mercury experienced a formation history unlike any other planet.”

During the mission, McClintock and his colleagues used MASCS to make the first detection of magnesium in the planet’s exosphere. The team also determined magnesium, calcium and sodium, the major elements observed with MASCS, show distinctive and different spatial patterns that repeat every Mercury year.

LASP Director Daniel Baker, also a co-investigator on the MESSENGER mission, is studying Mercury’s magnetic field and its interaction with the solar wind including violent “sub-storms” that occur in the planet’s vicinity. “MESSENGER has taught us more in four years of orbiting our sun’s nearest neighbor than we’ve learned in the prior several centuries put together,” Baker said. “We have come to understand much more deeply the geology, chemistry, atmospheric aspects and the space environment of a truly fascinating ‘miniature’ world.”

Baker said CU-Boulder’s involvement in the MESSENGER mission has helped attract bright and energetic faculty, postdoctoral fellows and graduate students. Even undergraduates have been participating in the mission including senior Ryan Dewey, a 2014 Goldwater Scholarship winner who sought out Baker as a sophomore because he wanted to be at the forefront of the MESSENGER discoveries.

“Ryan is an exceptional student who has worked on Mercury science at a level often reserved for advanced graduate students,” said Baker, noting Dewey was lead author on a 2013 scientific paper dealing with the interactions of Mercury’s magnetosphere and its space environment. “I know this work will serve him well as he moves on to graduate school and a professional career after that.”

The fate of MESSENGER is not in doubt, said McClintock. “Before long it’s going to be in pieces scattered across the surface of Mercury. But I don’t think anyone who has worked on the project will ever forget it,” he said. “It has been an extremely exciting mission, and a once-in-a-lifetime experience.”

CU-Boulder’s LASP has designed and built instruments that have visited or are en route to every planet in the solar system. As the MESSENGER mission to Mercury winds down, LASP has a student-built dust counter on NASA’s New Horizons mission, which launched in 2006 and will make its closest flyby of Pluto -- 7,000 miles -- on July 14. LASP also built instruments for NASA spacecraft now at Mars and Saturn. 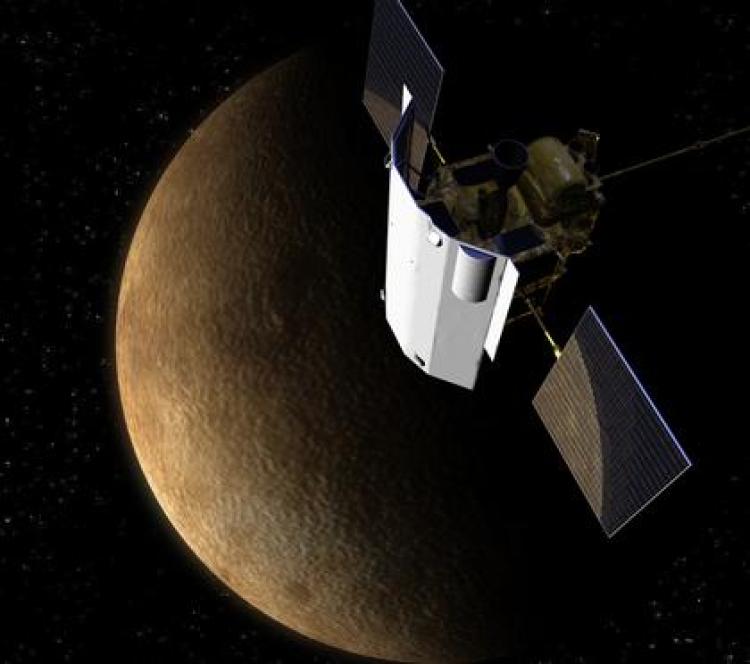 “The spacecraft is finally running out of fuel, and at this point it’s just sort of skimming the planet’s surface,” said Senior Research Scientist William McClintock of LASP, the principal investigator of the MASCS instrument for the mission. “A lot of people didn’t give this spacecraft much of a chance of even getting to Mercury, let alone going into orbit and then gathering data for four years instead of the original scheduled one-year mission. In the end, most of what we considered to be gospel about Mercury turned out to be a little different than we thought.”
Categories:

When he was in high school, Daniel Pette was fascinated by stars. When his earth science teacher told him that massive stars die out faster than smaller ones, Pette diagrammed a theory to figure out why this was. When he discovered that his findings were correct, Pette became determined to pursue a career in astrophysics. END_OF_DOCUMENT_TOKEN_TO_BE_REPLACED

CU-Boulder's Penina Axelrad , professor and chair of the Department of Aerospace Sciences, received the 2015 Aerospace Educator Award from the Women in Aerospace association. END_OF_DOCUMENT_TOKEN_TO_BE_REPLACED

It’s August and that means the hottest show in the night sky -- the Perseid meteor shower -- will make its annual appearance, peaking in the pre-dawn hours of Aug. 11 to 14. END_OF_DOCUMENT_TOKEN_TO_BE_REPLACED
Return to the top of the page