The self-organization properties of DNA-like molecular fragments four billion years ago may have guided their own growth into repeating chemical chains long enough to act as a basis for primitive life, says a new study by the University of Colorado Boulder and the University of Milan.

While studies of ancient mineral formations contain evidence for the evolution of bacteria from 3.5 to 3.8 billion years ago -- just half a billion years after the stabilization of Earth's crust -- what might have preceded the formation of such unicellular organisms is still a mystery. The new findings suggest a novel scenario for the non-biological origins of nucleic acids, which are the building blocks of living organisms, said CU-Boulder physics Professor Noel Clark, a study co-author.

A paper on the subject led by Tommaso Bellini of the University of Milan was published in a recent issue of Nature Communications. Other CU-Boulder co-authors of the study include Professor David Walba, Research Associate Yougwooo Yi and Research Assistant Gregory P. Smith. The study was funded by the Grant PRIN Program of the Italian Ministries of Education, Universities and Research and by the U.S. National Science Foundation.

The discovery in the 1980’s of the ability of RNA to chemically alter its own structure by CU-Boulder Nobel laureate and Distinguished Professor Tom Cech and his research team led to the development of the concept of an “RNA world” in which primordial life was a pool of RNA chains capable of synthesizing other chains from simpler molecules available in the environment. While there now is consensus among origin-of-life researchers that RNA chains are too specialized to have been created as a product of random chemical reactions, the new findings suggest a viable alternative, said Clark.

The new research demonstrates that the spontaneous self-assembly of DNA fragments just a few nanometers in length into ordered liquid crystal phases has the ability to drive the formation of chemical bonds that connect together short DNA chains to form long ones, without the aid of biological mechanisms. Liquid crystals are a form of matter that has properties between those of conventional liquids and those of a solid crystal -- a liquid crystal may flow like a liquid, for example, but its molecules may be oriented more like a crystal.

“Our observations are suggestive of what may have happened on the early Earth when the first DNA-like molecular fragments appeared,” said Clark.

For several years the research group has been exploring the hypothesis that the way in which DNA emerged in the early Earth lies in its structural properties and its ability to self-organize. In the pre-RNA world, the spontaneous self-assembly of fragments of nucleic acids (DNA and RNA) may have acted as a template for their chemical joining into polymers, which are substances composed of a large number of repeating units.

“The new findings show that in the presence of appropriate chemical conditions, the spontaneous self assembly of small DNA fragments into stacks of short duplexes greatly favors their binding into longer polymers, thereby providing a pre-RNA route to the RNA world,” said Clark.

The CU-Boulder authors are part of the Soft Materials Research Center (SMRC) headquartered on campus, one of 12 Materials Research and Science Engineering Centers selected by the National Science Foundation for funding in February 2015. The CU-Boulder center was founded with a $12 million NSF grant over six years. Clark is the SMRC center director and Chris Bowman is the associate director. 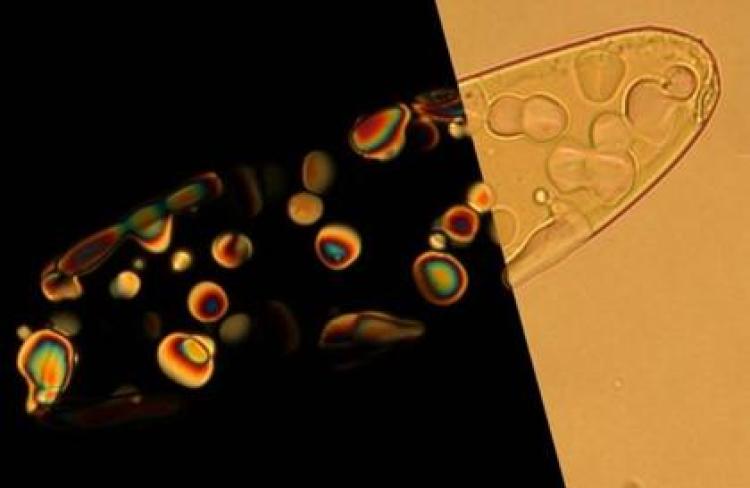 The image shows a droplet of condensed nano-DNA and within it smaller drops of its liquid crystal phase which show up in polarized light on the left. The liquid crystal droplets act as “micro-reactors" where short DNA can join together into long polymer chains without the aid of biological mechanisms. Image courtesy Noel Clark, University of Colorado

“Our observations are suggestive of what may have happened on the early Earth when the first DNA-like molecular fragments appeared,” said CU-Boulder physics Professor Noel Clark, a study co-author.
Categories:

The moon is engulfed in a permanent but lopsided dust cloud that increases in density when annual events like the Geminids spew shooting stars, according to a new study led by University of Colorado Boulder. END_OF_DOCUMENT_TOKEN_TO_BE_REPLACED

A mission to study dynamic changes in the atmosphere of Mars over days and seasons led by the United Arab Emirates (UAE) involves the University of Colorado Boulder as the leading U.S. scientific-academic partner. END_OF_DOCUMENT_TOKEN_TO_BE_REPLACED

The National Education Policy Center (NEPC) at the University of Colorado Boulder announced today that 17 high schools in New York and Colorado are the first to receive the “School of Opportunity” designation. These outstanding schools demonstrated a range of practices that ensured that all students had rich opportunities to succeed. All put students, not test scores, first. END_OF_DOCUMENT_TOKEN_TO_BE_REPLACED
Return to the top of the page