A new study by a team of Cassini mission scientists led by the University of Colorado Boulder have found that microscopic grains of rock detected near Saturn imply hydrothermal activity is taking place within the moon Enceladus.

The grains are the first clear indication of an icy moon having hydrothermal activity, in which seawater infiltrates and reacts with a rocky crust, emerging as a heated, mineral-laden solution. The finding adds to the tantalizing possibility that Enceladus, one of at least 60 Saturn moons or moonlets and which displays remarkable geologic activity including geysers, could contain environments suitable for living organisms.

The results are being published March 12 in the journal Nature.

The surprising new result follows an extensive, four-year analysis of data from the spacecraft, computer simulations and laboratory experiments. From their examination, the researchers determined the tiny grains most likely form when hot water containing dissolved minerals from the moon's rocky interior travels upward, coming into contact with cooler water.

Temperatures required for the interactions that produce the tiny rock grains would be at least 194 degrees Fahrenheit (90 degrees Celsius).

"It's very exciting that we can use these tiny grains of rock, spewed into space by geysers, to tell us about conditions on -- and beneath -- the ocean floor of an icy moon," said Research Associate Sean Hsu at CU-Boulder's Laboratory for Atmospheric and Space Physics, lead author on the paper.

Cassini's Cosmic Dust Analyzer (CDA) instrument has repeatedly detected miniscule rock particles, rich in the element silicon, near Saturn since 2004. By process of elimination, the CDA team concluded these particles must be grains of silica, which is found on Earth in sand and the mineral quartz. The consistent size of the grains observed by Cassini -- the largest of which were 6 to 9 nanometers -- was the clue that told the researchers a specific process likely was responsible.

On Earth, the most common way to form silica grains of this size is hydrothermal activity involving a specific range of conditions: namely, when slightly alkaline water with modest salinity that is super-saturated with silica undergoes a big drop in temperature.

"We methodically searched for alternate explanations for the nano-silca grains, but every new result pointed to a single, most likely origin," said Frank Postberg, a Cassini CDA team scientist at Heidelberg University in Germany, and a co-author on the paper.

Hsu and Postberg worked closely with colleagues at the University of Tokyo who performed the detailed laboratory experiments that validated the hydrothermal activity hypothesis. The Japanese team, led by Yasuhito Sekine, verified the conditions under which silica grains form at the same size Cassini detected. The researchers think these conditions may exist at the seafloor on Enceladus, where hot water from the interior meets the relatively cold water at the ocean bottom.

According to Kempf, the puzzle of the Enceladus plumes -- first identified not long after the Cassini spacecraft reached the realm of Saturn in 2004 -- has been solved, at least to some extent. "Ten years ago it was a big mystery why the nano-grains were made of silica rather than water ice," Kempf said. "Now we know the observations were correct. We know where the silica particles are coming from, and why we are seeing them. We learned something very unexpected, which is why I really like this study."

The extremely small size of the silica particles also suggests that they travel upward relatively quickly from their hydrothermal origin to the near-surface sources of the moon's now famous geysers. From seafloor to outer space, a distance of about 30 miles (50 kilometers), the grains spend a few months to a few years in transit, otherwise they would grow to much larger sizes.

Cassini first revealed active geology on Enceladus in 2005 with evidence of an icy spray issuing from the moon's south polar region and higher-than-expected temperatures in the icy surface there. The mission soon revealed a towering plume of water ice and vapor, salts and organic materials that issues from relatively warm fractures on the wrinkled surface. Gravity measurements published in 2014 strongly suggest the presence of a 6-mile-deep (10-kilometer) ocean beneath an ice shell about 19 to 25 miles (30 to 40 kilometers) thick.

The authors point out that Cassini's gravity measurements suggest Enceladus' rocky core is quite porous, which would allow water from the ocean to percolate into the interior. This would provide a huge surface area where rock and water could interact.

"It's possible much of this interesting hot water chemistry occurs deep inside the moon's core," Hsu said.

CU-Boulder has had a significant role in the Cassini mission since its launch in 1997. CU-Boulder Professor Larry Esposito of LASP is the principal investigator on a $12.5 million instrument suite flying on the Cassini spacecraft known as the UltraViolet Imaging Spectrograph (UVIS). Esposito and colleagues have used UVIS to make a number of important findings about Saturn’s rings and moons during the mission.

The Cassini-Huygens mission is a cooperative project of NASA, the European Space Agency and the Italian Space Agency. NASA's Jet Propulsion Laboratory, a division of the California Institute of Technology in Pasadena, manages the mission for NASA's Science Mission Directorate in Washington, D.C. The Cassini cosmic dust analyzer was provided by the German Aerospace Center.  The instrument team is based at the University of Stuttgart in Germany. 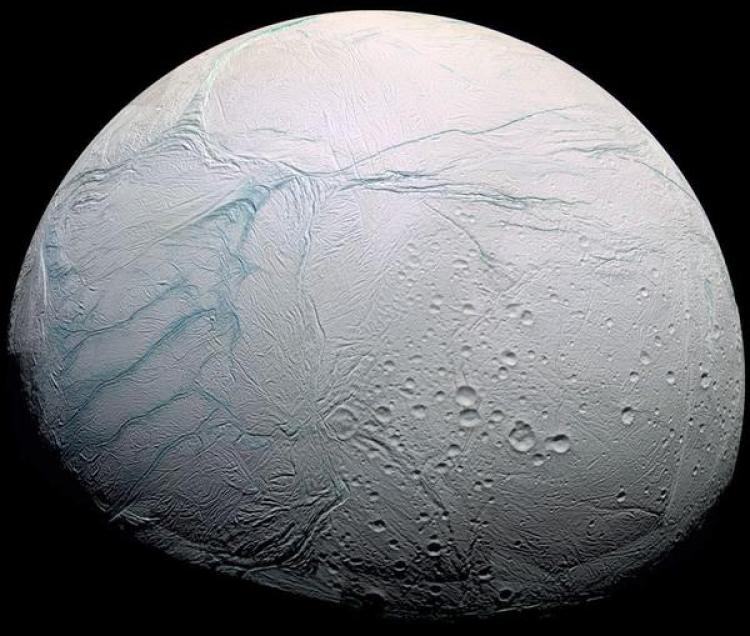 A team led by CU-Boulder has shown that Saturn’s icy moon Enceladus is spewing tiny silica grains, an indication hydrothermal activity is occurring in its ice-covered ocean. Such extreme environments are known to be suitable for life on Earth. Photo courtesy NASA/JPL

"It's very exciting that we can use these tiny grains of rock, spewed into space by geysers, to tell us about conditions on -- and beneath -- the ocean floor of an icy moon," said Research Associate Sean Hsu at CU-Boulder's Laboratory for Atmospheric and Space Physics, lead author on the paper.
Categories:

The moon is engulfed in a permanent but lopsided dust cloud that increases in density when annual events like the Geminids spew shooting stars, according to a new study led by University of Colorado Boulder. END_OF_DOCUMENT_TOKEN_TO_BE_REPLACED

A mission to study dynamic changes in the atmosphere of Mars over days and seasons led by the United Arab Emirates (UAE) involves the University of Colorado Boulder as the leading U.S. scientific-academic partner. END_OF_DOCUMENT_TOKEN_TO_BE_REPLACED

The University of Colorado Boulder was highly rated in a number of subject areas in the latest World University rankings by Quacquarelli Symonds Ltd. (QS). END_OF_DOCUMENT_TOKEN_TO_BE_REPLACED
Return to the top of the page