University of Colorado Boulder researchers will update NASA officials next week on a revolutionary space telescope concept selected by the agency for study last June that could provide images up to 1,000 times sharper than the Hubble Space Telescope.

CU-Boulder Professor Webster Cash said the instrument package would consist of an orbiting space telescope and an opaque disk in front of it that could be up to a half mile across. According to Cash, diffracted light waves from a target star or other space object would bend around the edges of the disk and converge in a central point. That light would then be fed into the orbiting telescope to provide high-resolution images, he said.

The new telescope concept, named the Aragoscope after French scientist Francois Arago who first detected diffracted light waves around a disk, could allow scientists to image space objects like black hole “event horizons” and plasma swaps between stars, said Cash of CU-Boulder’s Center for Astrophysics and Space Astronomy. The novel telescope system also could point toward Earth and image objects as small as a rabbit, giving it the ability to hunt for lost campers in the mountains, he said.

The CU-Boulder Aragoscope was one of 12 proposals selected for Phase One funding in June 2014 by the NASA Innovative Advanced Concept (NIAC) program, designed to turn science fiction into reality through pioneering technology development. Other Phase One NIAC proposals funded -- each for $100,000 over nine months -- include an orbiting device to capture tumbling asteroids and a robotic submarine to explore methane lakes on Titan, the largest moon of Saturn.

In April, NIAC will select six of the 2014 Phase One concepts for Phase Two funding, which is a two-year, $500,000 award. In 2004 and 2005, Cash was awarded Phase One and Phase Two funding for a concept of a telescope and a giant, daisy-shaped “starshade” that would block light from a parent star and let light from its planets to leak around the edges, allowing the team to image them. In 2008 NASA awarded Cash and his team an additional $1 million to further the New Worlds starshade study.

“Quite frankly, our New Worlds starshade project overlaps with the architecture we want to use for the Aragoscope, so we feel we are in pretty good shape going into Phase Two,” said Cash. The Aragoscope would be parked in a geostationary orbit 25,000 miles high that follows Earth’s rotation, making it appear motionless from the ground.

“Traditionally, space telescopes have essentially been monolithic pieces of glass like the Hubble Space Telescope,” said CU-Boulder doctoral student Anthony Harness of the Department of Astrophysical and Planetary Sciences, who is working with Cash on the project. “But the heavier the space telescope, the more expensive the cost of the launch. We have found a way to solve that problem by putting large, lightweight optics into space that offer a much higher resolution and lower cost.”

The opaque space disk would be made of a strong, dark, plastic-like material (think Hefty Bag) that could be launched in a compressed fashion like a parachute, then unfurled in orbit. The space shield would be tethered to the telescope at distances from tens to hundreds of miles depending on the size of the disk, said Harness.

“The opaque disk of the Aragoscope works in a similar way to a basic lens,” said Harness. “The light diffracted around the edge of the circular disk travels the same path length to the center and comes into focus as an image.” Since image resolution increases with telescope diameter, being able to launch such a large, yet lightweight disk would allow astronomers to achieve higher-resolution images than with smaller, traditional space telescopes, he said.

Cash and Harness said they hope to conduct an astronomical demonstration of the Aragoscope concept in the lab using a 1-meter disk placed several meters from a telescope. The light source would be fixed about 5 or 10 meters behind the disk.

In addition, they hope to test the starshade concept by fixing a space disk on a mountaintop and attaching a telescope on a hovering aircraft in order to image Alpha Centauri, a binary star system that appears as the third brightest star in the sky.

NIAC was created in 1998 to solicit revolutionary concepts from people and organizations that could advance NASA’s missions.  The winning concepts “push the limits of science and technology” and are expected to take at least a decade to develop.

In addition to the Aragoscope and Starshade project, cash won Phase One and Phase Two funding for a third NIAC concept in 2000 and 2001 when he proposed an X-ray interferometer that could be used to look down the mouths of black holes. 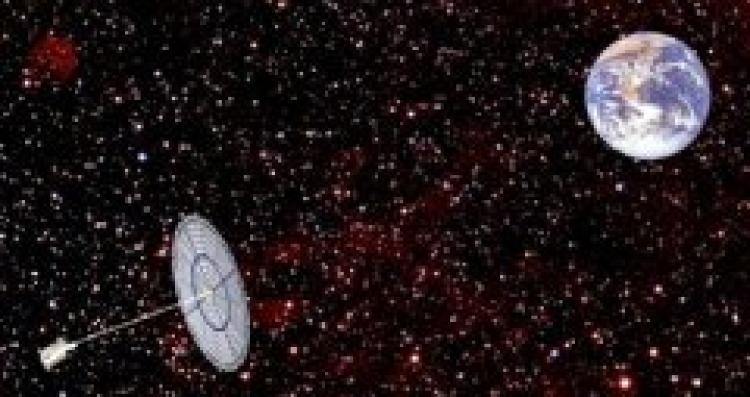 A new orbiting telescope concept developed at CU-Boulder could allow scientists to image objects in space or on Earth at hundreds of times the resolution of the Hubble Space Telescope. Image courtesy NASA

“Traditionally, space telescopes have essentially been monolithic pieces of glass like the Hubble Space Telescope,” said CU-Boulder doctoral student Anthony Harness of the Department of Astrophysical and Planetary Sciences, who is working with professor Webster Cash of CU-Boulder’s Center for Astrophysics and Space Astronomy on the project. “But the heavier the space telescope, the more expensive the cost of the launch. We have found a way to solve that problem by putting large, lightweight optics into space that offer a much higher resolution and lower cost.”
Categories:

When he was in high school, Daniel Pette was fascinated by stars. When his earth science teacher told him that massive stars die out faster than smaller ones, Pette diagrammed a theory to figure out why this was. When he discovered that his findings were correct, Pette became determined to pursue a career in astrophysics. END_OF_DOCUMENT_TOKEN_TO_BE_REPLACED

CU-Boulder's Penina Axelrad , professor and chair of the Department of Aerospace Sciences, received the 2015 Aerospace Educator Award from the Women in Aerospace association. END_OF_DOCUMENT_TOKEN_TO_BE_REPLACED

It’s August and that means the hottest show in the night sky -- the Perseid meteor shower -- will make its annual appearance, peaking in the pre-dawn hours of Aug. 11 to 14. END_OF_DOCUMENT_TOKEN_TO_BE_REPLACED
Return to the top of the page