Colorado’s Front Range fire severity today not much different than in past, says CU-Boulder study

The perception that Colorado’s Front Range wildfires are becoming increasingly severe does not hold much water scientifically, according to a massive new study led by the University of Colorado Boulder and Humboldt State University in Arcata, Calif.

The study authors, who looked at 1.3 million acres of ponderosa pine and mixed conifer forest from Teller County west of Colorado Springs through Larimer County west and north of Fort Collins, reconstructed the timing and severity of past fires using fire-scarred trees and tree-ring data going back to the 1600s. Only 16 percent of the study area showed a shift from historically low-severity fires to severe, potential crown fires that can jump from treetop to treetop.

The idea that modern fires are larger and more severe as a result of fire suppression that allowed forest fuels to build up in the past century is still prevalent among some, said CU-Boulder geography Professor Thomas Veblen, a study co-author. “The key point here is that modern fires in these Front Range forests are not radically different from the fire severity of the region prior to any effects of fire suppression,” he said.

A paper on the subject was published Sept. 24 in the journal PLOS ONE. The study was led by Associate Professor Rosemary Sherriff of Humboldt State University and involved Research Scientist Tania Schoennagel of CU-Boulder’s Institute of Arctic and Alpine Research, CU-Boulder doctoral student Meredith Gartner and Associate Professor Rutherford Platt of Gettysburg College in Gettysburg, Pa.

The study was funded by the National Science Foundation.

“The common assumption is that fires are now more severe and are killing higher percentages of trees,” said Sherriff, who completed her doctorate at CU-Boulder under Veblen in 2004. “Our results show that this is not the case on the Front Range except for the lowest elevation forests and woodlands.”

One important new finding comes from a comparison of nine large fires that have occurred on the Front Range since 2000 -- including the 2002 Hayman Fire southwest of Denver, the 2010 Fourmile Canyon Fire west of Boulder and the 2012 High Park Fire west of Fort Collins -- with historic fire effects in the region.

“It’s true that the Colorado Front Range has experienced a number of large fires recently,” said Schoennagel. “While more area has burned recently compared to prior decades – with more homes coming into the line of fire – the severity of recent fires is not unprecedented when we look at fire records going back before the 1900s.”

In addition, tree-ring evidence from the new study shows there were several years on the Front Range since the 1650s when there were very large, severe fires. The authors looked at more than 1,200 fire-scarred tree samples and nearly 8,000 samples of tree ages at 232 forest sample sites from Teller County to Larimer County.

The study is one of the largest of its kind ever undertaken in the western United States. The team was especially interested in fire records before about 1920, when effective fire suppression in the West began in earnest.

“In relatively dry ponderosa pine forests of the West, a common assumption is that fires were relatively frequent and of low severity, and not lethal to most large trees, prior to fuel build-up in the 20th century,” said Veblen. “But our study results showed that about 70 percent of the forest study area experienced a combination of moderate and high-severity fires in which large percentages of the mature trees were killed.”

Along the Front Range, especially at higher elevations, homeowners and fire managers should expect a number of high-severity fires unrelated to any kind of fire suppression and fuel build-up, said Schoennagel. “This matters because high-severity fires are dangerous to people, kill more trees and are trickier and more expensive to suppress.”

“Severe fires are not new to most forests in this region,” said Sherriff. “What is new is the expanded wildland-urban interface hazard to people and property and the high cost of suppressing fires for society.”

In addition, a warming Colorado climate -- 2 degrees Fahrenheit since 1977 -- has become a wild card regarding future Front Range fires, according to the team. While fires are dependent on ignition sources and can be dramatically influenced by high winds, the team expects to see a substantial increase in Front Range fire activity in the low and mid-elevations in the coming years as temperatures continue to warm, a result of rising greenhouses gases in Earth’s atmosphere. 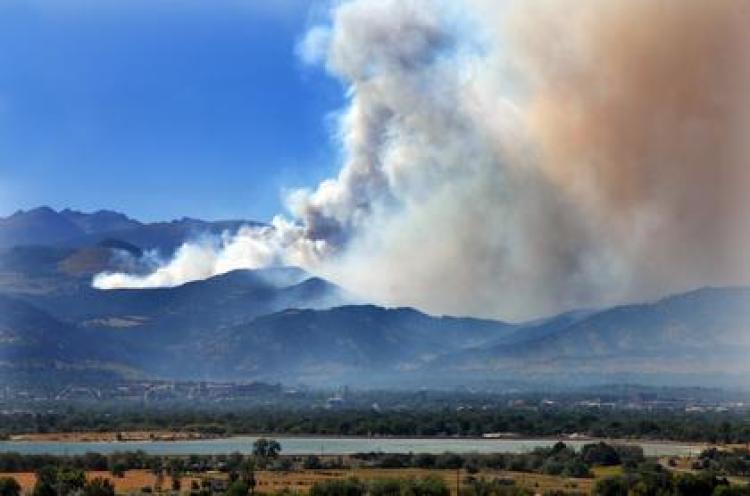 A view of the Fourmile Canyon Fire burning west of Boulder from an overlook in Louisville, Colo., on Sept. 6, 2010. (Photo by Glenn Asakawa/University of Colorado)

“It’s true that the Colorado Front Range has experienced a number of large fires recently,” said Research Scientist Tania Schoennagel of CU-Boulder’s Institute of Arctic and Alpine Research. “While more area has burned recently compared to prior decades – with more homes coming into the line of fire – the severity of recent fires is not unprecedented when we look at fire records going back before the 1900s.”
Categories:

University of Colorado faculty research merited $878.3 million in research awards during the 2014-15 fiscal year, based on preliminary figures, representing a near-record year for the four-campus system. END_OF_DOCUMENT_TOKEN_TO_BE_REPLACED

A University of Colorado Boulder and North Carolina State University-led team has produced the first atlas of airborne microbes across the continental U.S., a feat that has implications for better understanding health and disease in humans, animals and crops. END_OF_DOCUMENT_TOKEN_TO_BE_REPLACED
Return to the top of the page