CU-Boulder, Jet Propulsion Lab to sign memorandum of understanding May 22

Jet Propulsion Laboratory Director Charles Elachi and his senior management team will be on the University of Colorado Boulder campus May 22 to sign a memorandum of understanding with top university officials to continue and broaden a rich tradition of collaboration on space and Earth-science efforts going back nearly 50 years.

Elachi will sign the MOU May 22 with CU-Boulder Chancellor Philip P. DiStefano. Located in Pasadena, Calif., JPL is a federally funded research and development facility managed by the California Institute of Technology for NASA.

CU-Boulder, which began its collaboration with JPL in the 1960s, has been involved in roughly 40 sponsored research projects with JPL worth nearly $15 million between 2011 and 2013. The latest efforts include solar system exploration, star and galaxy formation, advanced telescope optics, science outreach and climate change, including sea-level rise, shrinking glaciers and anthropogenic changes in atmospheric gases.

The joint MOU is a product of the Strategic University Research Partnership, or SURP, which was established to encourage and support relationships between JPL and the nation’s top space education and research universities. Such JPL partnerships support collaborations and program development with universities that have strong educational and research programs in space and earth sciences and engineering fields that support national goals in space science and exploration.

“This has been such a fruitful and productive partnership, on so many levels, for so long, I am pleased to formalize this MOU,” said DiStefano. “This relationship has made CU-Boulder a national leader in space exploration over the last 45 years.”

Roughly 165 CU-Boulder graduates have gone on to work at JPL. That includes students -- primarily undergraduates -- who have designed, built and flown instruments on NASA space shuttles and sounding rockets, as well as undergraduates who have controlled NASA satellites from campus.

CU-Boulder has been intimately tied to solar system exploration missions operated by JPL dating back to 1969, when Laboratory for Atmospheric and Space Physics scientists designed and built ultraviolet spectrometers for the Mariner 6 and 7 missions to Mars. LASP also provided photopolarimeters for the twin Voyager spacecraft that toured the outer planets under the control of JPL -- spacecraft still flying at thousands of miles per hour and now literally knocking on the door at the edge of our solar system.

More recent JPL planetary missions involving CU-Boulder include the Galileo Mission to Jupiter carrying two instruments designed and built by LASP that launched in 1989 and arrived at Jupiter in 1995 to gather data on the gas giant planet system for seven years. In addition, the JPL-led Cassini Mission to Saturn arrived at the fabulous planet-moon-ring system in 2004 carrying 12 instruments, including a $12 million instrument package built by LASP. Because of the wealth of data the spacecraft has provided, NASA has funded the mission for extended observations that continue today.

CU-Boulder students played a huge role in the Solar Mesosphere Explorer Satellite mission managed by JPL to study the processes that create and destroy ozone. Launched in 1982 and dubbed “The Classroom in Space,” SME was built by Ball Aerospace and was the first NASA satellite ever operated by students. More than 100 students uploaded commands to the spacecraft during SME’s seven and one-half year lifetime.

“One of the most powerful aspects of our memorandum of understanding with JPL is the continued student participation in space research,” said CU-Boulder Vice Chancellor Stein Sture. “Undergraduate and graduate students already are involved in virtually all areas of research at CU-Boulder, and this agreement will provide new opportunities for them to gain even more knowledge and experience in space exploration and Earth system science.”

“The MOU between CU-Boulder and JPL is open-ended because JPL is developing a long-term strategic partnership with CU-Boulder,” said JPL Strategic University Partnership Program Manager Neil Murphy. “Strong collaborative relationships with the academic community provide accelerated innovation for NASA’s missions as well as the discovery of new science and technology opportunities for the future.”

JPL currently has memorandums of understanding with a dozen other universities conducting high-quality space sciences research, including Princeton, Stanford, MIT, Cornell and UCLA.

CU-Boulder is the only institute in the world to have designed and built space instruments that have been launched to every planet in the solar system, including the dwarf planet, Pluto. CU-Boulder is the No. 1 funded public university in the nation by NASA. 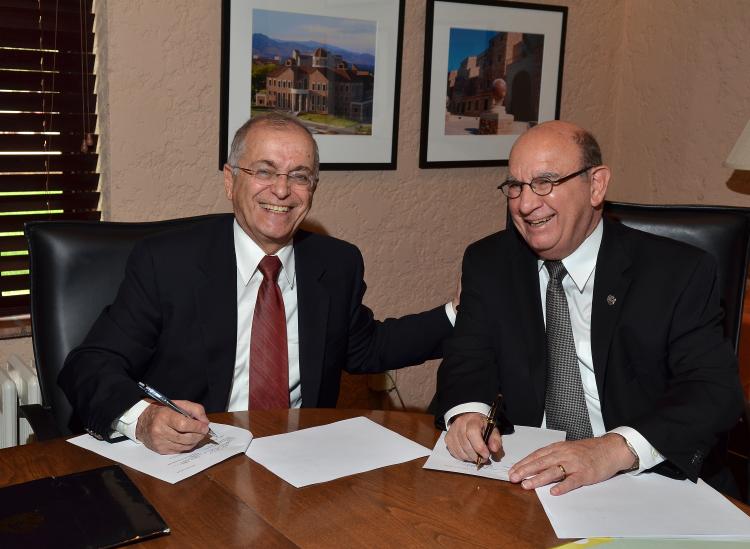 CU-Boulder Chancellor Philip P. DiStefano, right, and Jet Propulsion Lab Director Charles Elachi both sign a memorandum of understanding to continue and broaden a rich tradition of collaboration between JPL and CU-Boulder. (Photo by Casey A. Cass/University of Colorado)

“One of the most powerful aspects of our memorandum of understanding with JPL is the continued student participation in space research,” said CU-Boulder Vice Chancellor Stein Sture. “Undergraduate and graduate students already are involved in virtually all areas of research at CU-Boulder, and this agreement will provide new opportunities for them to gain even more knowledge and experience in space exploration and Earth system science.”
Categories:

When he was in high school, Daniel Pette was fascinated by stars. When his earth science teacher told him that massive stars die out faster than smaller ones, Pette diagrammed a theory to figure out why this was. When he discovered that his findings were correct, Pette became determined to pursue a career in astrophysics. END_OF_DOCUMENT_TOKEN_TO_BE_REPLACED

CU-Boulder's Penina Axelrad , professor and chair of the Department of Aerospace Sciences, received the 2015 Aerospace Educator Award from the Women in Aerospace association. END_OF_DOCUMENT_TOKEN_TO_BE_REPLACED

It’s August and that means the hottest show in the night sky -- the Perseid meteor shower -- will make its annual appearance, peaking in the pre-dawn hours of Aug. 11 to 14. END_OF_DOCUMENT_TOKEN_TO_BE_REPLACED
Return to the top of the page