The Mazal Holocaust Collection, considered the world’s largest privately owned Holocaust archive and the most significant U.S. collection outside of the Holocaust Memorial Museum in Washington, D.C., has been donated to the University of Colorado Boulder.

The highly regarded collection comprises more than 20,000 books and 500,000 documents, pamphlets, photographs and other materials, including original transcripts of the Nuremburg trials. Five thousand of the volumes are limited editions and rare books.

“This acquisition will transform CU-Boulder into a global center of scholarship on the 20th century Jewish experience,” said Professor David Shneer, the Louis P. Singer Chair in Jewish History and director of the Program in Jewish Studies. “By anchoring the university’s Archive of Post-Holocaust American Judaism with the story of the Holocaust itself and the destruction of much of European Jewish religious and cultural life, CU is now one of the only places in the world to be able to demonstrate how global Jewish life continued and flourished in the United States after World War II.”

The archive is the life work of Harry W. Mazal, a retired businessman from Mexico City who made San Antonio, Texas, his home and became an internationally recognized Holocaust collector and researcher. Working with numerous volunteers, Mazal dedicated his life to creating a vast repository committed to defending the voices and memories of the victims of the Holocaust around the world by promoting scholarly research related to Holocaust studies, Holocaust denial, anti-Semitism and bigotry.

“The Mazal Holocaust Collection is a unique collection of materials about the Holocaust,” Lipstadt said. “It will help make the University of Colorado Boulder one of the premier places for research on a myriad of aspects of the Holocaust. It is an amazing collection of documents which will be an asset to students at the university and researchers throughout the world.”

After Mazal’s death in 2011, his family wanted to ensure that his life’s work and legacy would continue to be available to scholars, researchers and educators around the world. A portion of the books from the Mazal Library has been donated to the new Texas A&M University–San Antonio. The rest of the library, including the highly valued archive and limited edition books, has been donated to CU-Boulder.

“The Mazal Holocaust Library was everything to Harry,” said daughter Aimee Mazal Skillin of Lone Tree, Colo. “It was his heart and soul and he made it his mission to debunk Holocaust deniers. His archive material was vast and CU has the capability to maintain, restore and share these valuable resources with the world.”

The materials were donated to Archives and Special Collections in CU-Boulder’s University Libraries and the Program in Jewish Studies. The collection will enhance scholarship and support research initiatives in a variety of disciplines and programs, said Steven Leigh, dean of the College of Arts and Sciences.

“I’ve been very impressed at how actively our faculty scholars have helped with this important collection,” Leigh said. “Professor Shneer reached out broadly across the campus and received tremendous support from so many of our people in all different areas of scholarship. The strong and uniformly positive responses that he received speak to the importance of the collection, as well as to its long-term positive impacts for CU-Boulder. The entire campus is excited by this generous gift.”

The Mazal Holocaust Collection will need a great deal of immediate attention and resources according to Bruce Montgomery, faculty director for Archives and Special Collections.

“The collection includes documents and rare materials that are fragile and require preservation -- making this a priority initiative at CU,” Montgomery said. “We anticipate considerable demand and interest and with supplemental funding, we hope to have a large portion of the collection accessible to researchers by the end of 2014.”

The Mazal Holocaust Collection will be housed within the Archive of Post-Holocaust American Judaism. The archive will examine Judaism and the Jewish experience through the lens of religious, cultural and social movements in America, as well as various philosophies of Judaism and Jewish organizations from the late 1940s to the present.

The Archive of Post-Holocaust American Judaism includes the most complete collection of materials documenting the Jewish Renewal movement, including the personal collection from the movement’s founder, Rabbi Zalman Schachter-Shalomi, as well as rabbis Arthur Waskow, Leah Novick and Michael Lerner, who also is editor of Tikkun magazine. Together these collections describe the revitalization of Judaism in America since World War II, emphasizing the cultural, ethical and mystical traditions in Judaism and Jewish culture that blossomed in the postwar U.S.

Noted scholar Shaul Magid, professor of religious studies and the Jay and Jeannie Schottenstein Chair in Modern Judaism at Indiana University Bloomington, champions ideas demonstrated by CU-Boulder’s Archive of Post-Holocaust American Judaism in his most recent book on American Post-Judaism. Magid will be a visiting scholar at CU-Boulder March 5-7 including an evening public lecture on March 6.

“One of Harry’s missions in life was education,” said Skillin. “The fact that CU has the resources to make these archives available to students and scholars alike promotes education of the Holocaust. We have no doubt that Harry is smiling from above and are grateful that his collection will live on and continue to educate.”

For more information on CU-Boulder’s Program in Jewish Studies and the Archive of Post-Holocaust American Judaism visit http://jewishstudies.colorado.edu/. 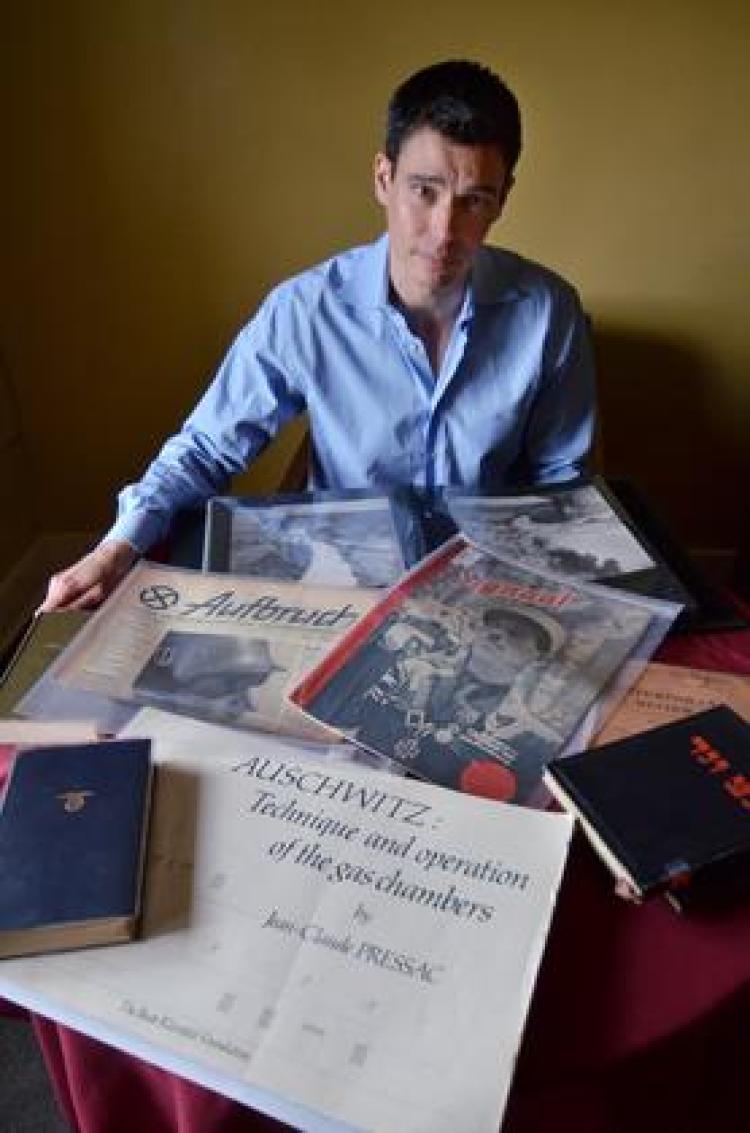 David Shneer, University of Colorado Boulder professor and Jewish Studies program director, displays some of the more than 500,000 pieces of the Mazal Holocaust Collection--considered the world's largest private Holocaust archive. The collection has been donated to CU-Boulder. (Photo by Glenn Asakawa/University of Colorado)

“This acquisition will transform CU-Boulder into a global center of scholarship on the 20th century Jewish experience,” said Professor David Shneer, the Louis P. Singer Chair in Jewish History and director of the Program in Jewish Studies. “By anchoring the university’s Archive of Post-Holocaust American Judaism with the story of the Holocaust itself and the destruction of much of European Jewish religious and cultural life, CU is now one of the only places in the world to be able to demonstrate how global Jewish life continued and flourished in the United States after World War II.”
Categories:

The University of Colorado Boulder was highly rated in a number of subject areas in the latest World University rankings by Quacquarelli Symonds Ltd. (QS). END_OF_DOCUMENT_TOKEN_TO_BE_REPLACED

An estate gift of just over $6 million from a music-loving economics alumnus will create three major new endowments benefiting the Department of Economics and the College of Music at the University of Colorado Boulder. Funding from the gift will endow two faculty chairs—one in economics and one in Baroque music—and create a unique travel sabbatical program for undergraduates. END_OF_DOCUMENT_TOKEN_TO_BE_REPLACED

Four University of Colorado Boulder students have been awarded U.S. Department of State Critical Languages Scholarships (CLS) for this summer. END_OF_DOCUMENT_TOKEN_TO_BE_REPLACED
Return to the top of the page