For the first time ever, a team led by the University of Colorado Boulder has sequenced the internal bacterial makeup of the three major life stages of a butterfly species, a project that showed some surprising events occur during metamorphosis.

The results showed the internal bacterial diversity of the red postman was halved when it morphed from the caterpillar to the chrysalis, or pupal stage, then doubled after the pupae turned into active adult butterflies. The study is important because communities of bacteria inhabiting other insects have been shown to affect host nutrition, digestion, detoxification and defense from predators, parasites and pathogens, said Hammer of the ecology and evolutionary biology department.

“What we saw was that the microbial community simplified and reorganized itself during the transition from caterpillar to pupa,” he said. “Then we saw the diversity double after the adult butterflies had emerged and began going about their business of feeding. That was a little surprising to us.”

A paper on the subject was published online Jan. 23 in the journal PLOS ONE. Study co-authors on the paper included CU-Boulder Associate Professor Noah Fierer of the ecology and environmental biology department and W. Owen McMillan of the Smithsonian Tropical Research Institute in Panama City, Panama. The butterflies were collected at a field site in Gamboa, Panama, and data analysis was done at CU-Boulder.

The collection of microorganisms on a single animal, collectively known as the microbiome, has become important because such bacterial groups have been found to affect metabolic and developmental processes from food digestion and vitamin synthesis to possible brain function, say experts. While the average human is made up of about 1 trillion cells, scientists now estimate each of us has a staggering 10 trillion bacteria  -- essentially 10 bacteria for every human cell, Hammer said.

“Butterflies are ecologically and scientifically important, and their transformation from caterpillar to chrysalis to winged adult is one of the most remarkable phenomena of the natural world,” he said. “But almost nothing had previously been known about what kind of internal microbes they have and how they change over the butterfly life cycle.”

One reason to study the microbial makeup of caterpillars has to do with the potential damage caterpillars can do to crops, said Hammer, who is pursuing a doctorate at CU in ecology and environmental biology. “People are starting to think about the microbiome of insects as targets for pest control, including insecticides, so we need to know what specific bacteria they contain and how they work.”

Fierer, also a fellow at the Cooperative Institute for Research in Environmental Sciences, or CIRES, said he looks at butterflies as “airborne microbial habitats.”

“The main question raised by this research is what these microbes are doing inside caterpillars and butterflies to influence their health and behavior,” Fierer said. “Now we know that the dramatic shift that occurs as caterpillars turn into active butterflies is matched by large changes in their microbial communities.”

The main motivation for choosing the red postman for study is that its genus is the only one that feeds on pollen, a rich source of amino acids, Hammer said. Most butterflies feed on nectar -- essentially sugar water -- leading to abbreviated lifespans lasting only days or weeks. But the red postman apparently has found a way to digest and then extract nutrients from pollen grains, likely expanding its lifespan by several months.

“This is a unique trait to this genus and could be mediated by its microbiome,” he said. Pollen feeding also appears to have led to co-evolution between Heliconius and their favorite flowers, which produce extra pollen and less nectar and appear throughout the year to match the butterfly’s unusually long lifespan.

Also, it appears that red postman caterpillars, which acquire nutrients from leaves they consume, are able to divert more resources toward making compounds that are toxic to some predators, Hammer said. Adult red postman butterflies are filled with the same compounds, which release cyanide when the butterfly is eaten.

Hammer collected the red postman butterflies just as one might expect -- using a butterfly net. He reached his sites by riding his bicycle from the research station to promising areas of the surrounding rainforest. He said the butterflies, while fairly slow fliers, are marked with specific color patterns that advertise they are toxic to predators. “It’s what we call a ‘shared teaching’ process -- some of the butterflies invariably get eaten before predators learn they are toxic,” he said.

The study also indicated that wild and captive red postman butterflies had different microbiomes, likely due to different diets, he said. CU-Boulder and the National Science Foundation funded the study.

CIRES is a joint research venture between CU-Boulder and the National Oceanic and Atmospheric Administration. In addition to Fierer, Hammer is co-advised by University of Colorado Museum of Natural History Curator of Entomology Deane Bowers, who also is a professor in the ecology and environmental biology department. 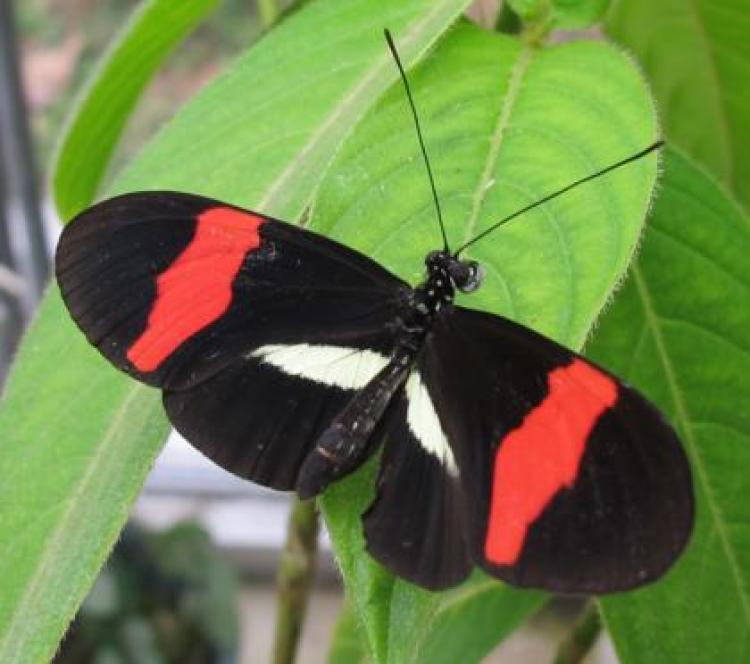 A new CU-Boulder study led by doctoral student Tobin Hammer has shown the internal microbial make-up of the red postman butterfly changed dramatically from caterpillar to pupa to adult. This is the first time researchers have ever sequenced the entire microbiome of a butterfly. Photos courtesy Tobin Hammer, University of Colorado

“Butterflies are ecologically and scientifically important, and their transformation from caterpillar to chrysalis to winged adult is one of the most remarkable phenomena of the natural world,” said CU-Boulder doctoral student Tobin Hammer of the ecology and evolutionary biology department. “But almost nothing had previously been known about what kind of internal microbes they have and how they change over the butterfly life cycle.”
Categories:

The moon is engulfed in a permanent but lopsided dust cloud that increases in density when annual events like the Geminids spew shooting stars, according to a new study led by University of Colorado Boulder. END_OF_DOCUMENT_TOKEN_TO_BE_REPLACED

A mission to study dynamic changes in the atmosphere of Mars over days and seasons led by the United Arab Emirates (UAE) involves the University of Colorado Boulder as the leading U.S. scientific-academic partner. END_OF_DOCUMENT_TOKEN_TO_BE_REPLACED

The National Education Policy Center (NEPC) at the University of Colorado Boulder announced today that 17 high schools in New York and Colorado are the first to receive the “School of Opportunity” designation. These outstanding schools demonstrated a range of practices that ensured that all students had rich opportunities to succeed. All put students, not test scores, first. END_OF_DOCUMENT_TOKEN_TO_BE_REPLACED
Return to the top of the page