Bedtime for toddlers: Timing is everything, says CU-Boulder study

The bedtime you select for your toddler may be out of sync with his or her internal body clock, which can contribute to difficulties for youngsters attempting to settle in for the night, according to a new University of Colorado Boulder study.

The study pinpointed the time when the hormone melatonin increased in the evening, indicating the start of the biological night, in a group of 14 toddlers whose sleep also was studied over the course of six days. The study showed that toddlers with later melatonin rise times took longer to fall asleep after being put to bed, said CU-Boulder Assistant Professor Monique LeBourgeois.

“There is relatively little research out there on how the physiology of toddlers may contribute to the emergence of sleep problems,” said LeBourgeois, a faculty member in the integrative physiology department who led the new study. “Sleeping at the wrong ‘biological clock’ time leads to sleep difficulties, like insomnia, in adults.”

While adults get to choose their own bedtime, toddlers rarely have this option, said LeBourgeois. “This study is the first to show that a poor fit between bedtimes selected by the parents of toddlers and the rise in their evening melatonin production increases their likelihood of nighttime settling difficulties,” said LeBourgeois.

The findings are important because about 25 percent of toddlers and preschoolers have problems settling after bedtime, said LeBourgeois.  Evening sleep disturbance can include difficulties falling asleep, bedtime resistance, tantrums, and episodes known as “curtain calls” that manifest themselves as calling out from bed or coming out of the bedroom, often repeatedly, for another story, glass of water or bathroom trip, she said.

Toddlers with longer intervals between the onset of nightly melatonin release and their subsequent bedtimes were shown to fall asleep more quickly and had decreased bedtime resistance as reported by their parents, according to the study.

Sleep problems in early childhood are predictive of later emotional and behavioral problems, as well as poor cognitive function, that can persist into later childhood and adolescence. In addition, parents of young children with sleep problems often report increased difficulties in their own sleep patterns, which can cause chronic fatigue and even marital discord, she said.

“A natural next step is to optimize our knowledge of the interactions between physiology and the environment to further understand how problems like bedtime resistance first develop and how they are maintained,” LeBourgeois said.

Research in adolescents and adults has shown that exposure to light in the evening can delay the timing onset of melatonin.  Whether the later rise of melatonin in some toddlers can be pushed to an earlier time by restricting evening light or by increasing morning light exposure is a question still to be answered, she said.

“We believe that arming parents with knowledge about the biological clock can help them make optimal choices about their child’s activities before bedtime, at bedtime, and his or her sleeping environment,” LeBourgeois said.

For the study, the research team recruited 14 families in Providence, R.I., each of which had a child between 30 and 36 months old who slept at least 10.5 hours nightly and took a daytime nap of at least 45 minutes.  Saliva samples containing the children’s melatonin levels were collected every 30 minutes over a six-hour period on one evening before bedtime.

Melatonin onset times varied among the 14 toddlers studied, which means the “hands” on the individual body clocks told each to be prepared to sleep at different times in the evening, she said.

Saliva was collected by having toddlers chew on dry dental cotton rolls, which were then “spun” onsite in a small centrifuge. The task of getting numerous saliva samples from a child during a single evening requires a team of three researchers called “sleep fairies” experienced at make-believe games, reading and crafts.

Because light suppresses melatonin levels, saliva samples were collected in families’ homes after they were converted into “caves” of sorts by covering the windows with dark plastic, installing dimmer switches and using low-watt light bulbs.

The average evening melatonin onset for the toddlers occurred at roughly 7:40 p.m., which occurred about 30 minutes before parent-selected bedtimes, said LeBourgeois. On average, the toddlers fell asleep about 30 minutes after bedtime. “It’s not practical to assess melatonin levels in every child,” LeBourgeois said. “But if your child is resisting bedtime or having problems falling asleep, it is likely he or she is not physiologically ready for sleep at that time.”

The study showed several toddlers who were put to bed before their rise in melatonin took 40-60 minutes to fall asleep. “For these toddlers, laying in bed awake for such a long time can lead to the association of bed with arousal, not sleep,” she said. “This type of response may increase children’s lifelong risk for insomnia over time.”

The toddlers wore special wristwatches to measure activity, allowing the researchers to objectively assess their sleep. They also collected subjective data from parents on their toddlers’ bedtime resistance and ease or difficulty falling asleep.

A 2012 study led by LeBourgeois indicated toddlers show more anxiety, less joy and interest, and a poorer understanding of how to solve problems when they missed their regular afternoon nap versus when they napped. These results suggested that children who miss out on needed sleep don’t benefit from positive life experiences and have problems coping with day-to-day challenges.

LeBourgeois currently has 10 undergraduates working in her CU-Boulder lab. “The contributions of students to the research done in my lab are enormous,” she said. “They not only perform the majority of data collection, but also participate in analyzing, interpreting and presenting our results to the scientific and lay communities.  Their love of science, discovery and working together as a team continually inspires me.” 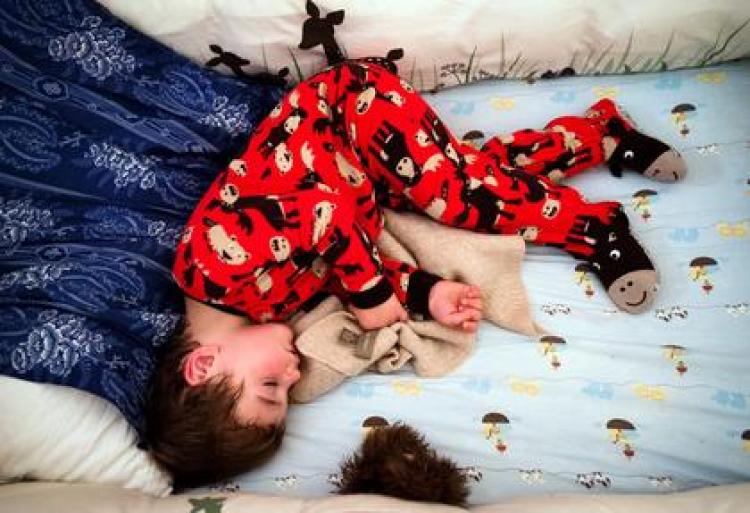 (Photo by Zach Ornitz/University of Colorado)

“There is relatively little research out there on how the physiology of toddlers may contribute to the emergence of sleep problems,” said Assistant Professor Monique LeBourgeois, a faculty member in the integrative physiology department who led the new study. “Sleeping at the wrong ‘biological clock’ time leads to sleep difficulties, like insomnia, in adults.”
Categories:

The moon is engulfed in a permanent but lopsided dust cloud that increases in density when annual events like the Geminids spew shooting stars, according to a new study led by University of Colorado Boulder. END_OF_DOCUMENT_TOKEN_TO_BE_REPLACED

A mission to study dynamic changes in the atmosphere of Mars over days and seasons led by the United Arab Emirates (UAE) involves the University of Colorado Boulder as the leading U.S. scientific-academic partner. END_OF_DOCUMENT_TOKEN_TO_BE_REPLACED

The National Education Policy Center (NEPC) at the University of Colorado Boulder announced today that 17 high schools in New York and Colorado are the first to receive the “School of Opportunity” designation. These outstanding schools demonstrated a range of practices that ensured that all students had rich opportunities to succeed. All put students, not test scores, first. END_OF_DOCUMENT_TOKEN_TO_BE_REPLACED
Return to the top of the page