A week’s worth of camping synchs internal clock to sunrise and sunset, CU-Boulder study finds

Spending just one week exposed only to natural light while camping in the Rocky Mountains was enough to synch the circadian clocks of eight people participating in a University of Colorado Boulder study with the timing of sunrise and sunset.

The study, published online today in the journal Current Biology, found that the synchronization happened in that short period of time for all participants, regardless of whether they were early birds or night owls during their normal lives.

“What’s remarkable is how, when we’re exposed to natural sunlight, our clocks perfectly become in synch in less than a week to the solar day,” said CU-Boulder integrative physiology Professor Kenneth Wright, who led the study.

Electrical lighting, which became widely available in the 1930s, has affected our internal circadian clocks, which tell our bodies when to prepare for sleep and when to prepare for wakefulness. The ability to flip a switch and flood a room with light allows humans to be exposed to light much later into the night than would be possible naturally.

Even when people are exposed to electrical lights during daylight hours, the intensity of indoor lighting is much less than sunlight and the color of electrical light also differs from natural light, which changes shade throughout the day.

To quantify the effects of electrical lighting, a research team led by Wright, who also is the director of CU-Boulder’s Sleep and Chronobiology Laboratory, monitored eight participants for one week as they went about their normal daily lives. The participants wore wrist monitors that recorded the intensity of light they were exposed to, the timing of that light, and their activity, which allowed the researchers to infer when they were sleeping.

At the end of the week, the researchers also recorded the timing of participants’ circadian clocks in the laboratory by measuring the presence of the hormone melatonin. The release of melatonin is one of the ways our bodies signal the onset of our biological nighttime. Melatonin levels decrease again at the start of our biological daytime.

The same metrics were recorded during and after a second week when the eight participants—six men and two women with a mean age of 30—went camping in Colorado’s Eagles Nest Wilderness. During the week, the campers were exposed only to sunlight and the glow of a campfire. Flashlights and personal electronic devices were not allowed.

On average, participants’ biological nighttimes started about two hours later when they were exposed to electrical lights than after a week of camping. During the week when participants went about their normal lives, they also woke up before their biological night had ended.

After the camping trip—when study subjects were exposed to four times the intensity of light compared with their normal lives—participants’ biological nighttimes began near sunset and ended at sunrise. They also woke up just after their biological night had ended. Becoming in synch with sunset and sunrise happened for all individuals even though the measurements from the previous week indicated that some people were prone to staying up late and others to getting up earlier.

“When people are living in the modern world—living in these constructed environments—we have the opportunity to have a lot of differences among individuals,” Wright said. “Some people are morning types and others like to stay up later. What we found is that natural light-dark cycles provide a strong signal that reduces the differences that we see among people—night owls and early birds—dramatically.”

Our genes determine our propensity to become night owls or early birds in the absence of a strong signal to nudge our internal circadian clocks to stay in synch with the solar day, Wright said.

The new study, which demonstrates just how strong of a signal exposure to natural light is, offers some possible solutions for people who are struggling with their sleep patterns. For example, people who naturally drift toward staying up late may also find that it’s more difficult to feel alert in the morning—when melatonin levels may indicate they’re still in their biological nighttimes—at work or in school.

To combat a person’s genetic drift toward later nights, exposure to more sunlight in the morning and midday could help nudge his or her internal clock earlier. Also, dimming electrical lights at night, forgoing late-night TV and cutting out screen time with laptops and other personal electronic devices also may help internal circadian clocks stay more closely attuned with the solar day, Wright said.

Other CU-Boulder co-authors of the study are doctoral students Andrew McHill and Evan Chinoy; former undergraduate students Brian Birks and Brandon Griffin, both of whom are now professional research assistants; and former postdoctoral researcher Thomas Rusterholz. 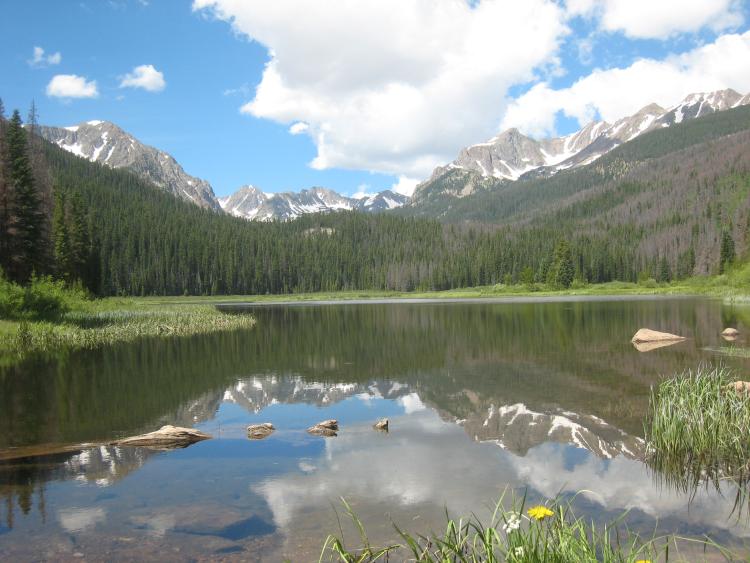 An image of the area in the Eagles Nest Wilderness of Colorado where the eight study participants camped for a week. The University of Colorado Boulder study found that being exposed only to natural light during the camping trip synched everyone's internal circadian clock with sunrise and sunset. (Photo courtesy of Kenneth Wright)

“When people are living in the modern world—living in these constructed environments—we have the opportunity to have a lot of differences among individuals,” said CU-Boulder integrative physiology Professor Kenneth Wright, who led the study. “Some people are morning types and others like to stay up later. What we found is that natural light-dark cycles provide a strong signal that reduces the differences that we see among people—night owls and early birds—dramatically.”
Categories:

Awake too early when you should be asleep? Might want to try and switch things up. A new study by the University of Colorado shows that the longer people are awake during the time their biological clock is telling them to sleep the worse their sensitivity to insulin, which is a precursor to diabetes. END_OF_DOCUMENT_TOKEN_TO_BE_REPLACED

On Thursday, Oct. 29, at 4 p.m. in UMC 235, Institute of Arctic and Alpine Research Fellow and Professor of civil, environmental and architectural engineering Diane McKnight will present, “The McMurdo Dry Valleys, Antarctica: Ecosystems waiting for water” as part of the 2015 Distinguished Research Lecturer series. END_OF_DOCUMENT_TOKEN_TO_BE_REPLACED

SuviCa Inc. of Boulder, a University of Colorado Boulder biotech start-up company, has been awarded roughly $1.5 million in federal funding to develop novel treatments for head and neck cancer. END_OF_DOCUMENT_TOKEN_TO_BE_REPLACED
Return to the top of the page