Solving the “faint young sun paradox” -- explaining how early Earth was warm and habitable for life beginning more than 3 billion years ago even though the sun was 20 percent dimmer than today -- may not be as difficult as believed, says a new University of Colorado Boulder study.

In fact, two CU-Boulder researchers say all that may have been required to sustain liquid water and primitive life on Earth during the Archean eon 2.8 billion years ago were reasonable atmospheric carbon dioxide amounts believed to be present at the time and perhaps a dash of methane. The key to the solution was the use of sophisticated three-dimensional climate models that were run for thousands of hours on CU’s Janus supercomputer, rather than crude, one-dimensional models used by almost all scientists attempting to solve the paradox, said doctoral student Eric Wolf, lead study author.

“It’s really not that hard in a three-dimensional climate model to get average surface temperatures during the Archean that are in fact moderate,” said Wolf, a doctoral student in CU-Boulder’s atmospheric and oceanic sciences department. “Our models indicate the Archean climate may have been similar to our present climate, perhaps a little cooler. Even if Earth was sliding in and out of glacial periods back then, there still would have been a large amount of liquid water in equatorial regions, just like today.”

Evolutionary biologists believe life arose on Earth as simple cells roughly 3.5 billion years ago, about a billion years after the planet is thought to have formed. Scientists have speculated the first life may have evolved in shallow tide pools, freshwater ponds, freshwater or deep-sea hydrothermal vents, or even arrived on objects from space.

A cover article by Wolf and CU-Boulder Professor Brian Toon on the topic appears in the July issue of Astrobiology. The study was funded by two NASA grants and by the National Science Foundation, which supports CU-Boulder’s Janus supercomputer used for the study.

Scientists have been trying to solve the faint young sun paradox since 1972, when Cornell University scientist Carl Sagan -- Toon’s doctoral adviser at the time -- and colleague George Mullen broached the subject. Since then there have been many studies using 1-D climate models to try to solve the faint young sun paradox -- with results ranging from a hot, tropical Earth to a “snowball Earth” with runaway glaciation -- none of which have conclusively resolved the problem.

Wolf and Toon used a general circulation model known as the Community Atmospheric Model version 3.0 developed by the National Center for Atmospheric Research in Boulder and which contains 3-D atmosphere, ocean, land, cloud and sea ice components. The two researchers also “tuned up” the model with a sophisticated radiative transfer component that allowed for the absorption, emission and scattering of solar energy and an accurate calculation of the greenhouse effect for the unusual atmosphere of early Earth, where there was no oxygen and no ozone, but lots of CO2 and possibly methane.

The simplest solution to the faint sun paradox, which duplicates Earth’s present climate, involves maintaining roughly 20,000 parts per million of the greenhouse gas CO2 and 1,000 ppm of methane in the ancient atmosphere some 2.8 billion years ago, said Wolf. While that may seem like a lot compared to today’s 400 ppm of CO2 in the atmosphere, geological studies of ancient soil samples support the idea that CO2 likely could have been that high during that time period. Methane is considered to be at least 20 times more powerful as a greenhouse gas than CO2 and could have played a significant role in warming the early Earth as well, said the CU researchers.

There are other reasons to believe that CO2 was much higher in the Archean, said Toon, who along with Wolf is associated with CU’s Laboratory for Atmospheric and Space Physics. The continental area of Earth was smaller back then so there was less weathering of the land and a lower release of minerals to the oceans. As a result there was a smaller conversion of CO2 to limestone in the ocean. Likewise, there were no “rooted” land plants in the Archean, which could have accelerated the weathering of the soils and indirectly lowered the atmospheric abundance of CO2, Toon said.

Another solution to achieving a habitable but slightly cooler climate under the faint sun conditions is for the Archean atmosphere to have contained roughly 15,000 to 20,000 ppm of CO2 and no methane, said Wolf. “Our results indicate that a weak version of the faint young sun paradox, requiring only that some portion of the planet’s surface maintain liquid water, may be resolved with moderate greenhouse gas inventories,” the authors wrote in Astrobiology.

“Even if half of Earth’s surface was below freezing back in the Archean and half was above freezing, it still would have constituted a habitable planet since at least 50 percent of the ocean would have remained open,” said Wolf. “Most scientists have not considered that there might have been a middle ground for the climate of the Archean.

Has the faint young sun paradox finally been solved? “I don’t want to be presumptuous here,” said Wolf. “But we show that the paradox is definitely not as challenging as was believed over the past 40 years. While we can’t say definitively what the atmosphere looked like back then without more geological evidence, it is certainly not a stretch at all with our model to get a warm early Earth that would have been hospitable to life.”

“The Janus supercomputer has been a tremendous addition to the campus, and this early Earth climate modeling project would have impossible without it,” said Toon. The researchers estimated the project required roughly 6,000 hours of supercomputer computation time, an effort equal to about 10 years on a home computer. 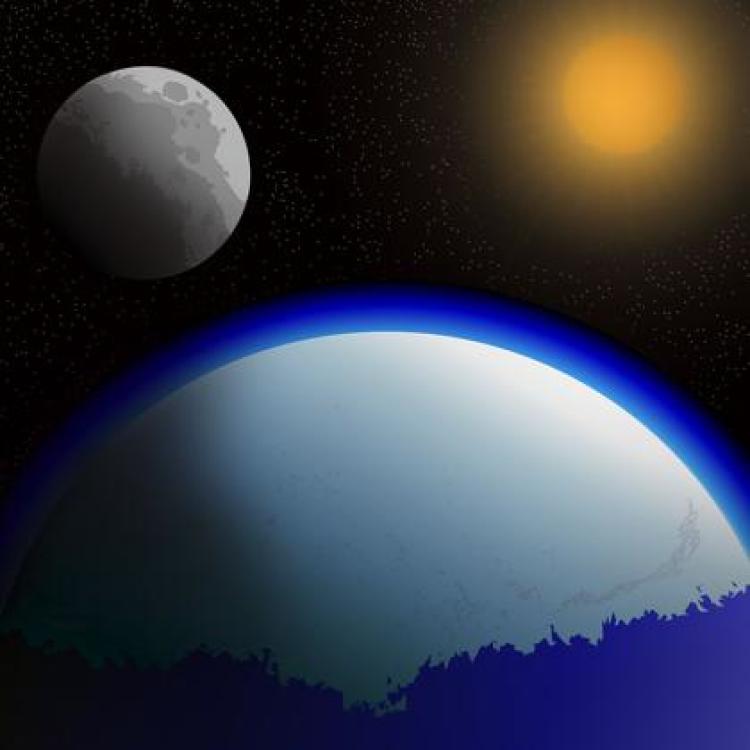 An artist’s conception of the Earth during the late Archean, 2.8 billion years ago. Weak solar radiation requires the Earth have increased greenhouse gas amounts to remain warm. CU-Boulder doctoral student Eric Wolf and CU-Boulder Professor Brian Toon use a three-dimensional climate model to show that the late Archean may have maintained large areas of liquid surface water despite a relatively weak greenhouse. With carbon dioxide levels within constraints deduced from ancient soils, the late Archean may have had large polar ice caps but lower latitudes would have remained temperate and thus hospitable to life. The addition of methane allows the late Archean to warmed to present day mean surface temperatures. Image Credit: Charlie Meeks

Awake too early when you should be asleep? Might want to try and switch things up. A new study by the University of Colorado shows that the longer people are awake during the time their biological clock is telling them to sleep the worse their sensitivity to insulin, which is a precursor to diabetes. END_OF_DOCUMENT_TOKEN_TO_BE_REPLACED

On Thursday, Oct. 29, at 4 p.m. in UMC 235, Institute of Arctic and Alpine Research Fellow and Professor of civil, environmental and architectural engineering Diane McKnight will present, “The McMurdo Dry Valleys, Antarctica: Ecosystems waiting for water” as part of the 2015 Distinguished Research Lecturer series. END_OF_DOCUMENT_TOKEN_TO_BE_REPLACED

SuviCa Inc. of Boulder, a University of Colorado Boulder biotech start-up company, has been awarded roughly $1.5 million in federal funding to develop novel treatments for head and neck cancer. END_OF_DOCUMENT_TOKEN_TO_BE_REPLACED
Return to the top of the page