A University of Colorado Boulder professor is leading a major NASA airborne science campaign this summer that will probe weather patterns and air pollution over a vast expanse of North America that have potential global climate consequences.

The campaign, known as the Studies of Emissions, Atmospheric Composition, Clouds and Climate Coupling by Regional Surveys, or SEAC4RS, will allow researchers to look at the atmosphere from top to bottom at a critical time of year when strong weather systems pump chemicals from regional air pollution high into the atmosphere, said CU-Boulder Professor Brian Toon, the project science leader. The team will use a suite of scientific instruments aboard three aircraft: a NASA DC-8 airliner converted into a flying laboratory, the agency’s high-altitude ER-2 -- a modern version of the Air Force U2-S reconnaissance aircraft -- and a Spec Inc. Lear Jet from Boulder equipped with advanced sensors to measure the properties of clouds.

The multimillion-dollar project will involve more than 250 scientists, engineers, students and flight personnel from five different NASA centers, the National Center for Atmospheric Research in Boulder, the National Oceanic and Atmospheric Administration and 15 universities, including CU-Boulder, Harvard University, the California Institute of Technology and the University of Innsbruck. The research flights in the SEAC4Rs campaign are slated to begin in August and run through the end of September.

There are several mission goals, said Toon, a professor in CU-Boulder’s atmospheric and oceanic sciences department. The team wants to understand how air pollution and other substances like water, for example, are carried from Earth’s surface to the stratosphere, since they can impact climate and the ozone layer. While such vertical transport occurs daily during random thunderstorms, it also occurs in organized systems like hurricanes and the North American Monsoon, which covers a large region of the American Southwest as well as Mexico, Central America and northern South America each summer, bringing rain to arid lands, he said.

A second goal is to chart how emissions from plants and domestic animals are interacting with air pollution, said Toon, who also is affiliated with CU’s Laboratory for Atmospheric and Space Physics. “In the southeast United States, there are large atmospheric emissions from plants and people that affect air quality,” he said. “When the air from these two sources is mixed, unusual chemistry can occur, potentially impacting human health.  Satellites show a large change in these emissions between August and September, which we would like to know more about.”

The team also is interested in better understanding how smoke impacts climate and will study intense North American forest fires hurling huge plumes of smoke into the atmosphere that can drift across the Atlantic Ocean to Europe. “By altering cloud properties and by absorbing sunlight, smoke can have a significant effect on the climate,” he said.

In addition, the SEAC4RS air campaign will be used to measure the accuracy of NASA satellites, develop new techniques for gathering atmospheric data and to learn more about the planet from space. Numerous NASA Earth-observing satellites are involved in the project, including CloudSat, CALYPSO and GOES.

The SEAC4Rs campaign will be based at Ellington Field in Houston, which is operated by NASA’s Johnson Space Center, and at NASA’s Dryden Research Center in Edwards, Calif.

LASP’s Sebastian Schmidt and Peter Pilewskie -- Pilewskie also is a professor in CU-Boulder’s atmospheric and oceanic sciences department -- will be studying radiation from the sky and how it is impacted by aerosols like smoke, air pollution and clouds.  LASP’s Lynn Harvey will help with flight planning and forecasting, while two of Toon’s students, Chris Maloney and Pengfei Yu, also will help with flight planning.

“This is a wonderful opportunity for graduate students,” said Toon. “Not only do they get involved in a large field program, they also get to meet the scientists from the United States and other countries involved in the project. These types of campaigns are a great opportunity for our students to become part of the wider scientific community and to demonstrate their own abilities.”

Some of the NOAA researchers involved in SEAC4RS are affiliated with the Cooperative Institute for Research in Environmental Sciences, a joint venture of CU and NOAA. CIRES scientist Jose Jimenez, also a professor in CU-Boulder’s chemistry and biochemistry department, will be studying air pollution particulates, including soot unleashed by forest fires. Several CU-Boulder graduate students from CIRES also are involved in the campaign.

Toon was one of two mission scientists for a $12 million NASA campaign in 2007 operating out of Costa Rica and involving 600 scientists, students and support staff to measure how tropical storms influence global warming and stratospheric ozone depletion. In 2011, the American Geophysical Union awarded Toon the Revelle Medal for his groundbreaking work on the effects of aerosols and clouds and climate.

The SEAC4Rs campaign is sponsored by the Earth Science Division in the Science Mission Directorate at NASA Headquarters in Washington, D.C., with support from the National Science Foundation and the Naval Research Laboratory. 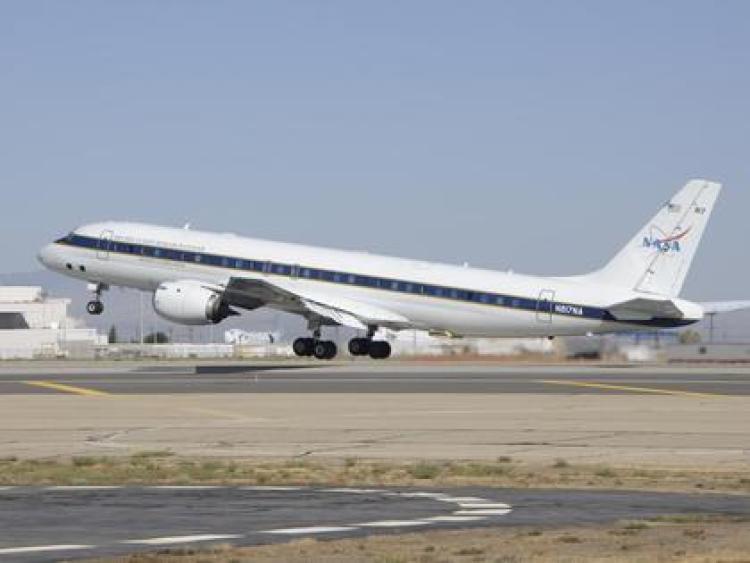 A scientific campaign to study weather and air pollution over North America will include the use of NASA's DC-8 Airborne Science Laboratory. The project is being led by CU-Boulder Professor Brian Toon. (Image courtesy NASA)

The Living Materials Laboratory is scaling up the manufacture of carbon-neutral cement as well as cement products, which can slowly pull carbon dioxide out of the atmosphere and store it. END_OF_DOCUMENT_TOKEN_TO_BE_REPLACED

Qubits, the basic building blocks of quantum computers, are as fragile as snowflakes. Now, researchers have come up with a new way of reading out the information from certain kinds of qubits with a light touch, potentially paving the way for a quantum internet. END_OF_DOCUMENT_TOKEN_TO_BE_REPLACED

New results from real-world tests of a downwind turbine could inform and improve the wind energy industry in a world with intensifying hurricanes and a greater demand for renewable energy. END_OF_DOCUMENT_TOKEN_TO_BE_REPLACED
Return to the top of the page