A multimillion dollar University of Colorado Boulder instrument package to study space weather has passed its pre-installation testing and is ready to be incorporated onto a National Oceanic and Atmospheric Administration satellite for a 2015 launch.

Designed and built by CU’s Laboratory for Atmospheric and Space Physics, the instrument suite known as the Extreme Ultraviolet and X-ray Irradiance Sensors, or EXIS, is the first of four identical packages that will fly on four NOAA weather satellites slated for launch beginning in 2015. CU-Boulder’s EXIS will measure energy output from the sun that can affect satellite operations, telecommunications, GPS navigation and power grids on Earth as part of NOAA’s next generation Geostationary Operational Environmental Satellites, or GOES-R.

NASA issued the contract with CU-Boulder on behalf of NOAA to design, build, test, deliver and scientifically support the four instrument packages for roughly $95 million, said LASP Senior Research Scientist Frank Eparvier, principal investigator on the project. The EXIS instrument package will be delivered to Lockheed Martin Space Systems Co. in Littleton, Colo., for installation on the spacecraft in the coming months.

“We are excited because we developed and built all new technology for the EXIS instrument package for the GOES-R satellite,” said Eparvier. “We already have a close working relationship with NOAA’s Space Weather Prediction Center in Boulder, and these extremely sensitive instruments should help scientists better understand solar events and help to mitigate the effects of space weather on Earth.”

EXIS consists of two LASP instruments, including XRS, an X-ray sensor that can determine the strength of solar flares and provide rapid alerts to scientists, said Eparvier. Large solar flares, equivalent to the explosion of millions of atomic bombs, can trigger “proton events” that send charged atomic particles flying off the sun and into Earth’s atmosphere in just minutes. They can damage satellites, trigger radio blackouts and even threaten the health of astronauts by penetrating spacecraft shielding, he said.

“The XRS gives the first alert that a solar flare is occurring, providing NOAA with details on its timing, magnitude and direction within seconds,” said Eparvier.  “We call it the ‘money’ instrument.” The newest version of the XRS designed and built by LASP for the GOES-R satellite program has a larger range of sensitivity than previous GOES X-ray sensors, he said.

Not only can rapid fluctuations in extreme UV wavelengths from the sun ionize the upper atmosphere and interfere with communications like cell phones and GPS signals, they can create satellite drag, causing spacecraft to slowly fall out of orbit and burn up months or years before such events are anticipated, said Eparvier.

“Modern technology has made us vulnerable to extreme variations in space weather that can have significant effects on Earth communications,” he said. “Extreme solar activity can cause problems for power companies all around the world, for example, in part because they all are interconnected.”

NOAA’s GOES satellites are a series of weather satellites that help scientists make timely and accurate weather forecasts. Two GOES satellites are now in geostationary orbit at a height of about 22,000 miles, with one focusing on the east part of the Americas overlapping with another focusing on the west. NOAA also keeps a third, spare GOES in the same orbit in the event of a satellite failure. Satellites in geostationary orbits complete one revolution in the same amount of time it takes for the Earth to rotate once on its polar axis, allowing them to “stare” at a portion of Earth.

In addition to the GOES contract, LASP is receiving $18 million from NASA for instruments and electronics flying aboard the Van Allen Probes mission launched in 2012 to study Earth’s radiation belts.  LASP also designed and built a $32 million instrument for NASA’s Solar Dynamics Observatory that launched in 2010, and designed, built and operates the $100 million SORCE solar satellite from campus.

“LASP is the one-stop shop for all solar irradiation instruments and measurements,” said Eparvier.

CU-Boulder is the first university to contract with NOAA on a GOES satellite mission. More than 100 LASP personnel ranging from scientists and engineers to technicians, programmers and students have worked on the EXIS program since 2006. CU-Boulder’s LASP will support EXIS on the four NOAA GOES satellite missions through spacecraft integration, testing, launch and commissioning, said Eparvier.

“One of the biggest challenges for us was to design and build the EXIS instruments for longevity,” said Eparvier. “Each has to be built to withstand five years of storage on Earth, five years of ‘on orbit’ storage and 10 years of operation. These instruments have to meet performance requirements 20 years after delivery.”

Each instrument package – which is roughly the size of a large microwave oven and weighs 66 pounds – is about three times heavier than normal due to extra shielding that protects them from high-energy particle penetration, said Eparvier. Rather than build the instrument suites individually, the specific parts for each are built at the same time to save money. LASP’s Mike Anfinson is the project manager for EXIS.

NOAA manages the GOES-R Series Program — which consists of the GOES-R, GOES-S, GOES-T and GOES-U satellites — through an integrated NOAA-NASA program office that is staffed with personnel from NOAA and NASA. 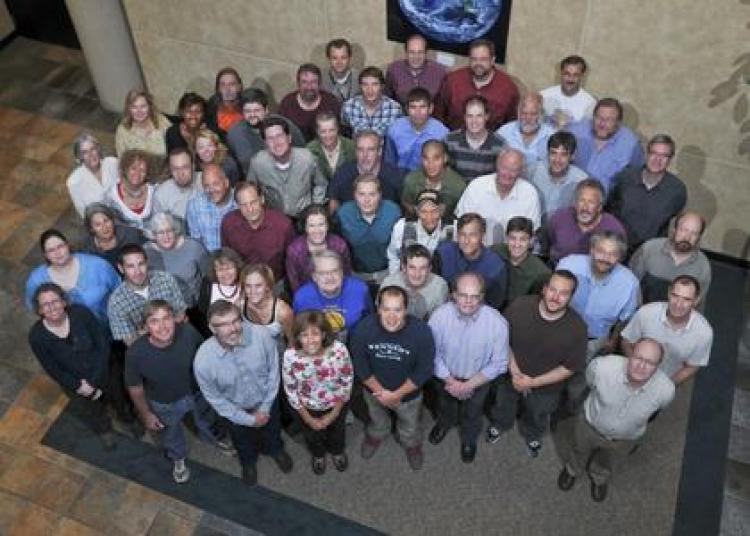 "The XRS gives the first alert that a solar flare is occurring, providing NOAA with details on its timing, magnitude and direction within seconds,” said LASP Senior Research Scientist Frank Eparvier, principal investigator on the project. “Modern technology has made us vulnerable to extreme variations in space weather that can have significant effects on Earth communications.”
Categories:

Awake too early when you should be asleep? Might want to try and switch things up. A new study by the University of Colorado shows that the longer people are awake during the time their biological clock is telling them to sleep the worse their sensitivity to insulin, which is a precursor to diabetes. END_OF_DOCUMENT_TOKEN_TO_BE_REPLACED

On Thursday, Oct. 29, at 4 p.m. in UMC 235, Institute of Arctic and Alpine Research Fellow and Professor of civil, environmental and architectural engineering Diane McKnight will present, “The McMurdo Dry Valleys, Antarctica: Ecosystems waiting for water” as part of the 2015 Distinguished Research Lecturer series. END_OF_DOCUMENT_TOKEN_TO_BE_REPLACED

SuviCa Inc. of Boulder, a University of Colorado Boulder biotech start-up company, has been awarded roughly $1.5 million in federal funding to develop novel treatments for head and neck cancer. END_OF_DOCUMENT_TOKEN_TO_BE_REPLACED
Return to the top of the page