As much as dog owners love their children, they tend to share more of themselves, at least in terms of bacteria, with their canine cohorts rather than their kids.

That is just one finding of a new study led by the University of Colorado Boulder that looked at the types and transfer modes of microbes from the guts, tongues, foreheads and palms (or paws) of members of 60 American families, including canines. Identifying how such bacterial communities can be affected by environmental exposure may help scientists better understand how they can be manipulated to prevent or treat disease, say CU-Boulder Associate Professor Rob Knight and CU-Boulder doctoral student Se Jin Song, the study leaders.

Knight and his team sampled 159 people and 36 dogs. Seventeen of the 60 families had children at home ranging in age from 6 months to 18 years, 17 families had one or more dogs and no children, eight families had both children and dogs and 18 families had neither children nor dogs. Each family consisted of at least one couple between the ages of 26 and 87, and all of the children in the study were biologically related to the couples in the study.

The team swabbed various parts of the body to obtain microbial samples on the couples, children and dogs.  For humans, the team looked at the tongue, forehead, right and left palm and fecal samples to detect individual microbial communities. Dogs were sampled similarly, except that fur was sampled instead of skin on the forehead and all four paws were swabbed for bacteria in the absence of canine palms.

“One of the biggest surprises was that we could detect such a strong connection between their owners and pets,” said Knight, also a faculty member at CU-Boulder’s BioFrontiers Institute and an Early Career Howard Hughes Medical Institute Scientist. “In fact, the microbial connection seems to be stronger between parents and family dogs than between parents and their children.”

Another surprise from the study: If you want to share more of your skin bacteria with your spouse, get a dog.

A paper on the subject was published today in the new online science and biomedical journal, eLIFE, a joint initiative of the Howard Hughes Medical Institute, the Max Planck Society and the Wellcome Trust Fund.

Studies of the human microbiome have become one of the hottest areas of biological research, said Knight, a scientist in the ongoing National Institutes of Health Human Microbiome Project that has thus far sequenced the microbial mosaic of 300 humans. The number of microbes living on and inside a typical human is about 100 trillion, outnumbering human cells by about 10 to one. And the microorganisms humans carry around -- or don’t -- have been linked to a broad spectrum of diseases ranging from malnutrition and obesity to diabetes, asthma and depression, he said.

“There is mounting evidence that exposure to a variety of environmental sources of microbes can affect long-term health, findings known as the ‘hygiene hypothesis,’ ” said Song, a graduate student in CU-Boulder’s ecology and evolutionary biology department and first author on the paper.  Proposed by British epidemiologist Richard Strachen in 1989, the hypothesis is that children who have had a lack of exposure to bacteria and microorganisms might be more prone to getting sick because many microbes have co-evolved with people to be beneficial.

In the new study, the team found the composition of human bacteria is affected by factors like age and environmental exposure, said Song. “Our skin microbiota in particular seems to be the most malleable by our immediate surroundings, which includes the presence of household pets.”

The primary results indicated the family unit had a strong effect on human microbial community composition across all body sites, said Knight.  The weakest relationship on body sites was the father-to-infant connection on the forehead and palms.

In addition, the new study showed parents share significantly more similar tongue and gut communities with their own children than with other children, but only after about age 3.  Such results indicate it is probably easier to exchange skin microbes on home surfaces or indoor air than it is to exchange tongue or gut bacteria, likely because skin surfaces are “less selective” environments, said Knight.

The study was funded by the Howard Hughes Medical Institute, the Crohn’s and Colitis Foundation of America, and the National Institutes of Health.

Dogs were key to the new study, said Knight of CU-Boulder’s chemistry and biochemistry department, since results from previous studies suggested there were components of co-habitation involved in microbe sharing. “These previous studies were conducted on humans only, and we wanted to determine whether similar patterns exist when we considered nonhuman co-inhabitants,” he said. “And since so many people consider their pets truly a part of the family, it seemed appropriate to include them in a study involving family structure.”

The lab procedure involved collecting and isolating microbial DNA directly from swabs used for sampling each body site. Specific bacterial RNA genes present in the DNA were then amplified using a technique known as PCR and the genes sequenced with high-capacity DNA sequencers. The specific bacterial RNA genes amplified from each sample obtained from each body site of each individual were “tagged” during the PCR step with a sample-specific DNA barcode developed by Knight’s group, allowing the team to pool hundreds of samples together prior to a single sequencing run. 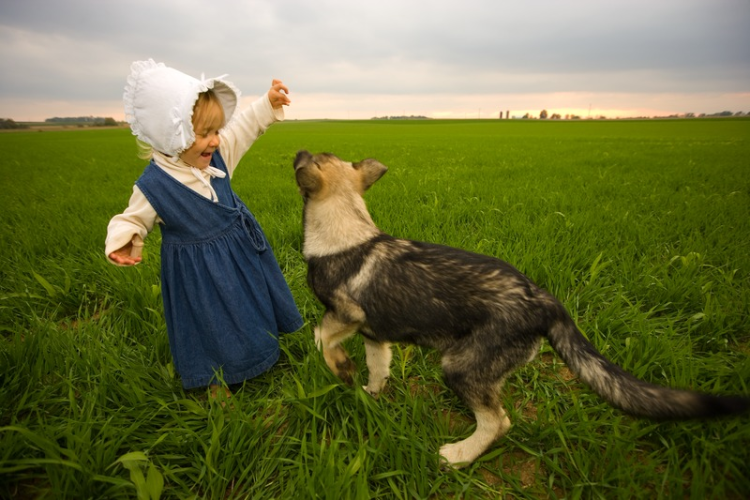 A new CU study indicates parents are more likely to share bacteria with their dogs than their kids,  a finding with biomedical implications. Photo courtesy Natural Resources Conservation Services

“One of the biggest surprises was that we could detect such a strong connection between their owners and pets,” said Knight, also a faculty member at CU-Boulder’s BioFrontiers Institute and an Early Career Howard Hughes Medical Institute Scientist. “In fact, the microbial connection seems to be stronger between parents and family dogs than between parents and their children.”
Categories:

Awake too early when you should be asleep? Might want to try and switch things up. A new study by the University of Colorado shows that the longer people are awake during the time their biological clock is telling them to sleep the worse their sensitivity to insulin, which is a precursor to diabetes. END_OF_DOCUMENT_TOKEN_TO_BE_REPLACED

On Thursday, Oct. 29, at 4 p.m. in UMC 235, Institute of Arctic and Alpine Research Fellow and Professor of civil, environmental and architectural engineering Diane McKnight will present, “The McMurdo Dry Valleys, Antarctica: Ecosystems waiting for water” as part of the 2015 Distinguished Research Lecturer series. END_OF_DOCUMENT_TOKEN_TO_BE_REPLACED

SuviCa Inc. of Boulder, a University of Colorado Boulder biotech start-up company, has been awarded roughly $1.5 million in federal funding to develop novel treatments for head and neck cancer. END_OF_DOCUMENT_TOKEN_TO_BE_REPLACED
Return to the top of the page