For some University of Colorado Boulder undergraduates, designing, building and flying small satellites is becoming a large part of their hands-on education.

NASA recently selected CU-Boulder as one of 24 institutions or organizations to fly tiny satellites as auxiliary payloads aboard rockets planned for launch in 2014, 2015 and 2016. The selections are part of NASA’s CubeSat Launch Initiative, an effort that began in 2010 and involves students at institutions like CU-Boulder developing and flying CubeSat satellites, which are about the size of a loaf of bread, have a volume of about a quart and generally weigh less than 3 pounds.

From 2010 to 2013 CU-Boulder was awarded five launch opportunities for CubeSats by NASA, the most of any university in the nation. Each launch is worth the equivalent of roughly $300,000, the going rate for commercial space payloads of that size and weight, said aerospace engineering Professor Scott Palo, whose team was selected by NASA in 2013 to design and build a flight-ready CubeSat satellite.

The CU CubeSat, known as the High Latitude Ionospheric Thermospheric Experiment, or HiLITE, is a collaboration between the aerospace department and two small Boulder-based companies, Blue Canyon Technologies and ASTRA, which are supported in part by the U.S. Air Force to help develop CubeSat hardware, said Palo.

HiLITE will be designed and built using aspects of the design and architecture of an existing small satellite known as CubeSat for Atmospheric Studies in Orbit and Re-entry, or CASTOR. The CubeSat was developed as a senior design project in 2011-12 by eight students in CU’s College of Engineering and Applied Science.

John Stark, CASTOR team member and a Denver native who plans to stay on campus for his master’s and doctoral degrees in engineering, said he felt fortunate to work with a high-caliber research group. “I can’t imagine getting a better education anywhere else -- the faculty here are dedicated to seeing that the students succeed,” he said. “Ideally I’d like to keep working with small satellites -- they are going to be a game changer for the industry in the coming years.”

HiLITE’s mission will be to measure atmospheric density, which impacts satellite positioning and other space weather conditions, said Palo, who will select a new team of seniors for the project beginning next fall. “I’ve been involved in the senior design projects for 15 years because I really enjoy project-based learning,” he said.  “It’s a passion of mine. It’s fun to work with students for extended periods of time on satellites that will be going into space and taking compelling measurements.”

Palo also has co-authored a joint proposal to the National Science Foundation involving CU-Boulder, Stanford University, the University of Michigan and Johns Hopkins University for funds to collaborate on CubeSat developments at each of the four institutions. The NSF proposal by the schools is targeting the launch of the CubeSats as part of the QB50 program, a European effort led by the Von Karman Institute for Fluid Dynamics in Belgium, which has a goal of launching 50 CubeSats on a single rocket.

In addition, Palo is the co-investigator on a student satellite known as the Colorado Student Space Weather Experiment involving more than 60 students from five academic majors that launched in 2012.  Led by aerospace engineering Professor Xinlin Li, also a research associate at the Laboratory for Atmospheric and Space Physics, the CubeSat project is returning data to a CU ground station to help understand how particles emitted by powerful solar flares affect Earth’s radiation belts.

A third group headquartered at CU-Boulder, the Colorado Space Grant Consortium, or COSGC, has been designing and building space hardware, including CubeSats, since it was created in 1989 by NASA. COSGC has provided hands-on experience to more than 10,000 students, primarily undergraduates, in designing, building and flying satellites, said COSGC Director Chris Koehler.

COSGC in 2007 was selected to design and build a CubeSat satellite known as Hermes as part of NASA’s first Educational Launch of Nanosatellites, or ELaNa program, a mission that launched in 2011.  “Although the rocket carrying the tiny communications satellite failed to achieve orbit, “the educational benefits of an interdisciplinary team designing, building, testing and preparing for the launch of a small satellite is immeasurable,” said Sanders.

“The Hermes project was a pivotal moment for our program, because we were one of only three universities selected by NASA to design and build the first CubeSat satellites that were a part of ELaNa,” said Sanders.  “Since then there have been an increasing number of opportunities for schools across the country to design and build CubeSats. And the hands-on experience undergraduates get with small satellites can be applied through their graduate studies and beyond.”

A second CubeSat satellite designed and built by COSGC with the help of scientists and engineers from Lockheed Martin in Littleton to provide hands-on experience in applying science, technology, engineering and mathematics skills to building operational space systems also is slated for launch on a commercial SpaceX rocket. The CubeSat is known as ALL-STAR/THEIA and will carry an Earth-observing camera to take color images of the planet from space.

COSGC also is working with CU-Boulder’s National Snow and Ice Data Center and the Center for Environmental Technology in CU’s engineering college to design and build a CubeSat known as PolarCube that will take meteorological data over the Arctic in an attempt to better understand the large decline of Arctic sea ice now under way as a result of climate change, said Sanders.

“I wasn’t expecting to be able to work on satellites during my undergraduate years,” said junior aerospace engineering student Glenda Alvarenga, who grew up in Aurora, attended Hinkley High School and currently is working on her third satellite project at COSGC, PolarCube. “I learned about Space Grant through a class I took my sophomore year called Gateway to Space, and it was a lot of fun.” Alvarenga, who is minoring in electrical engineering, said she may go on for a master’s degree in engineering at CU or may go to work in the aerospace industry if the right opportunity comes along. 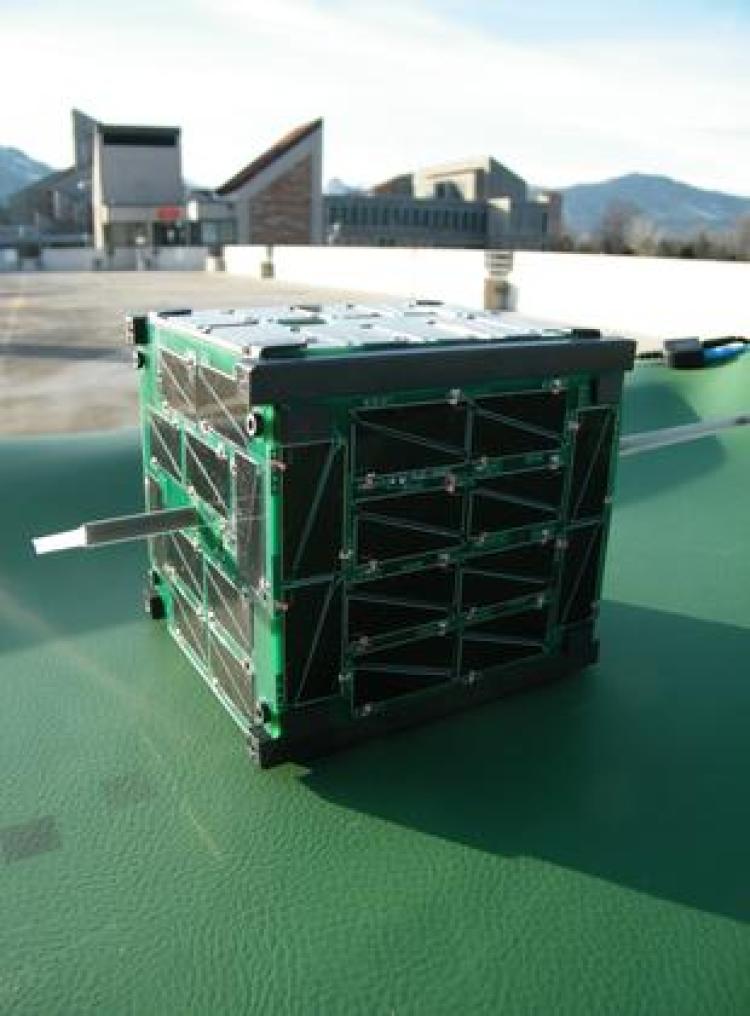 A Rubik's Cube-sized communications satellite designed and built by University of Colorado Boulder undergraduates at the Colorado Space Grant Consortium launched by NASA in November 2011.

“I wasn’t expecting to be able to work on satellites during my undergraduate years,” said junior aerospace engineering student Glenda Alvarenga, who grew up in Aurora, attended Hinkley High School and currently is working on her third satellite project at COSGC, PolarCube. “I learned about Space Grant through a class I took my sophomore year called Gateway to Space, and it was a lot of fun.” Alvarenga, who is minoring in electrical engineering, said she may go on for a master’s degree in engineering at CU or may go to work in the aerospace industry if the right opportunity comes along.
Categories:

When he was in high school, Daniel Pette was fascinated by stars. When his earth science teacher told him that massive stars die out faster than smaller ones, Pette diagrammed a theory to figure out why this was. When he discovered that his findings were correct, Pette became determined to pursue a career in astrophysics. END_OF_DOCUMENT_TOKEN_TO_BE_REPLACED

CU-Boulder's Penina Axelrad , professor and chair of the Department of Aerospace Sciences, received the 2015 Aerospace Educator Award from the Women in Aerospace association. END_OF_DOCUMENT_TOKEN_TO_BE_REPLACED

It’s August and that means the hottest show in the night sky -- the Perseid meteor shower -- will make its annual appearance, peaking in the pre-dawn hours of Aug. 11 to 14. END_OF_DOCUMENT_TOKEN_TO_BE_REPLACED
Return to the top of the page