A scaled, working model of the solar system built by engineering students at the University of Colorado Boulder will be officially unveiled at Andrews Hall on Feb. 11.

The unveiling and dedication of the “grand orrery” is free and open to the public. The event will begin at 3 p.m. at Andrews Hall, the home of a residential academic program for engineers located on Kittredge Loop Road southeast of Fiske Planetarium.

A grand orrery is a mechanical planetary system that illustrates the relative positions and motions of both the inner and outer planets. The system designed and built by CU-Boulder students has been described as “part art and part magic.”

The system is 9 feet in diameter and driven by a set of 20 gears cut out of quarter-inch brass. It is suspended from the ceiling of the residence hall’s common room where it serves as a symbol of the Andrews community.

“This community did so much for me, and it feels great to leave something behind,” said Eitan Cher, a former honors student who led the team of 11 students in creating the grand orrery as an extracurricular project during the 2011-12 academic year.

Cher graduated from CU-Boulder in May 2012 with a bachelor’s degree in mechanical engineering, but he plans to return to Boulder for the unveiling. He is now a master’s degree student enrolled in Northwestern University’s Engineering Design and Innovation program.

“We’re about more than just engineering -- we’re a community of artists, musicians, athletes and more,” Cher said about the Andrews Hall community. “This project was undertaken not only as a stress relief, but also as an expression of who we are.”

The grand orrery was the brain child of Scot Douglass, director of the Engineering Honors Program and faculty-in-residence at Andrews Hall. Douglass approached Cher in the fall of 2011 to ask him to oversee a team of engineering students in developing it as a community project.

“The engineering students in Andrews are full of talent, passion and imagination, and I’m always looking for creative ways for them to express this,” said Douglass. “Education at its best transcends the classroom, beyond the calculus of credits and degrees, to living out what one wants to be educated for.”

Cher said he took on the project because of his personal interest in three-dimensional design and modeling.  He also has designed numerous custom puzzles similar to a Rubik’s Cube but with different geometries and mechanisms.

After spending hundreds of hours on the orrery, Cher said, “I’m really pleased with how it came out. I feel a real connection with it.”

The orrery was designed so that the orbiting speeds of each planet are accurate in relation to one another, but they are scaled up so that the motion of the planets can be enjoyed by a casual observer, he explained. Mercury will orbit the sun in exactly one hour, while Pluto’s orbit will take 43 days.

“After much debate, we decided to include Pluto, if only for sentimental reasons,” Cher said.

“A logarithmic scale was used for the radii of the planets and their orbits to account for the enormous sizes that characterize the gas giants and the vast distances that separate the outer planets,” he added. “Without the logarithmic scale, Jupiter would be several feet in diameter, and Pluto’s orbit would stretch beyond Kittredge Pond."

Adam Norris, an instructor in applied mathematics, served as technical adviser, and Josh Colyer, a structural engineering contractor, designed the structure that secures the orrery to the ceiling.

“The Andrews orrery showcases the great potential of the residential academic program model when academics, residential life and facilities management work and, in this case, play together,” said Douglass. 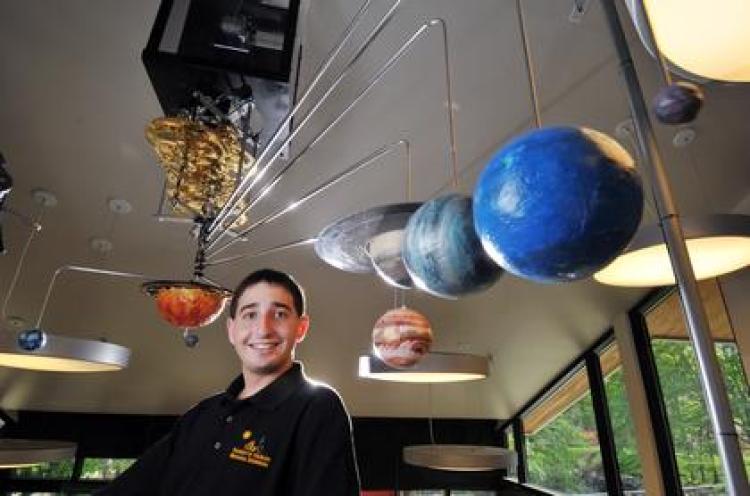 CU-Boulder engineering alumnus Eitan Cher poses with a completed working model of the solar system, or grand orrery, he made with a team of students at Andrews Hall. Andrews houses a residential academic program for engineering students. (Photo by Glenn Asakawa/University of Colorado)

“The engineering students in Andrews are full of talent, passion and imagination, and I’m always looking for creative ways for them to express this,” said Scot Douglass, director of the Engineering Honors Program and faculty-in-residence at Andrews Hall. “Education at its best transcends the classroom, beyond the calculus of credits and degrees, to living out what one wants to be educated for.”
Categories:

Awake too early when you should be asleep? Might want to try and switch things up. A new study by the University of Colorado shows that the longer people are awake during the time their biological clock is telling them to sleep the worse their sensitivity to insulin, which is a precursor to diabetes. END_OF_DOCUMENT_TOKEN_TO_BE_REPLACED

On Thursday, Oct. 29, at 4 p.m. in UMC 235, Institute of Arctic and Alpine Research Fellow and Professor of civil, environmental and architectural engineering Diane McKnight will present, “The McMurdo Dry Valleys, Antarctica: Ecosystems waiting for water” as part of the 2015 Distinguished Research Lecturer series. END_OF_DOCUMENT_TOKEN_TO_BE_REPLACED

SuviCa Inc. of Boulder, a University of Colorado Boulder biotech start-up company, has been awarded roughly $1.5 million in federal funding to develop novel treatments for head and neck cancer. END_OF_DOCUMENT_TOKEN_TO_BE_REPLACED
Return to the top of the page