A new University of Colorado Boulder-led study that ties forest “greenness” in the western United States to fluctuating year-to-year snowpack indicates mid-elevation mountain ecosystems are most sensitive to rising temperatures and changes in precipitation and snowmelt.

Led by CU-Boulder researcher Ernesto Trujillo and Assistant Professor Noah Molotch, the study team used the data -- including satellite images and ground measurements -- to identify the threshold where mid-level forests sustained primarily by moisture change to higher-elevation forests sustained primarily by sunlight and temperature.  Being able to identify this “tipping point” is important because it is in the mid-level forests -- at altitudes from roughly 6,500 to 8,000 feet -- where many people live and play in the West and which are associated with increasing wildfires, beetle outbreaks and increased tree mortality, said Molotch.

“Our results provide the first direct observations of the snowpack-forest connections across broad spatial scales,” said Molotch, also a research scientist at CU-Boulder’s Institute of Arctic and Alpine Research. “Finding the tipping point between water-limited forests and energy-limited forests defines for us the region of the greatest sensitivity to climate change -- the mid-elevation forests -- which is where we should focus future research.”

While the research by Molotch and his team took place in the Sierra Nevada mountain range in California, it is applicable to other mountain ranges across the West, he said.  The implications are important, since climate studies indicate the snowpack in mid-elevation forests in the Western United States and other similar forests around the world has been decreasing in the past 50 years because of regional warming.

“We found that mid-elevation forests show a dramatic sensitivity to snow that fell the previous winter in terms of accumulation and subsequent melt,” said Molotch, also a scientist at NASA’s Jet Propulsion Laboratory in Pasadena, Calif.  “If snowpack declines, forests become more stressed, which can lead to ecological changes that include alterations in the distribution and abundance of plant and animal species as well as vulnerability to perturbations like fire and beetle kill.”

A paper on the subject was published online Sept. 9 in Nature Geosciences.  Co-authors on the study include Ernesto Trujillo of INSTAAR and the Ecole Polytechnique Fédérale de Lausanne in Switzerland, Michael Golden and Anne Kelly of the University of California, Irvine, and Roger Bales of the University of California, Merced. The National Science Foundation and NASA funded the study.

Molotch said the study team attributed about 50 percent of the greenness in mid-elevation forests by satellites to maximum snow accumulation from the previous winter, with the other 50 percent caused by conditions like soil depth, soil nutrients, temperature and sunlight.  “The strength of the relationship between forest greenness and snowpack from the previous year was quite surprising to us,” Molotch said.

The research team initially set out to identify the various components of drought that lead to vegetation stress, particularly in mountain snowpack, said Molotch. “We went after snowpack in the western U.S. because it provides about 60 to 80 percent of the water input in high elevation mountains.”

The team used 26 years of continuous data from the Advanced Very High Resolution Radiometer, a space-borne sensor flying on a National Oceanic and Atmospheric Administration satellite, to measure the forest greenness. The researchers compared it to long-term data from 107 snow stations maintained by the California Cooperative Snow Survey, a consortium of state and federal agencies.

In addition, the researchers used information gathered from several “flux towers” in the southern Sierra Nevada mountain range, which measure the exchanges of carbon dioxide, water vapor and energy between terrestrial ecosystems and the atmosphere. Instruments on the towers, which are roughly 100 feet high, allowed them to measure the sensitivity of both mid-level and high-level mountainous regions in both wet and dry years -- data that matched up well with the satellite and ground data, he said.

“The implications of this study are profound when you think about the potential for ecological change in mountainous environments in the West in the not too distant future,” said Molotch, an assistant professor in the geography department. “If we take our study and project forward in time when climate models are calling for warming and drying conditions, the implication is that forests will be increasingly water-stressed in the future and thus more vulnerable to fires and insect outbreaks.

“When you put this into the context of recent losses in Colorado and elsewhere in the West to forest fire devastation, then it becomes something we really have to pay attention to,” he said.  “This tipping-point elevation is very likely to migrate up the mountainsides as the climate warms.” 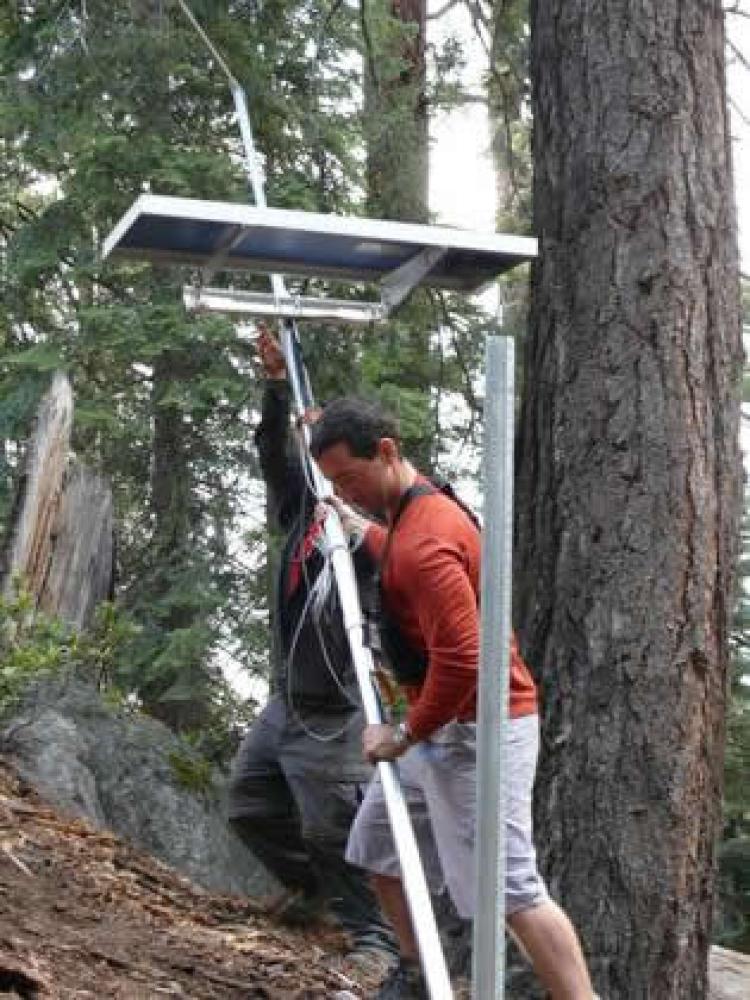 CU-Boulder Assistant Professor Noah Molotch deploys an automated snow-depth sensor and solar panel in Sequoia National Park in the Sierra Nevada mountain range in California. Molotch and colleagues have found that mid-level mountain ecosystems in the West, where many people live, camp, hike, fish and mountain bike, are the most sensitive to climate change. (Photo courtesy Noah Molotch/University of Colorado)

University of Colorado faculty research merited $878.3 million in research awards during the 2014-15 fiscal year, based on preliminary figures, representing a near-record year for the four-campus system. END_OF_DOCUMENT_TOKEN_TO_BE_REPLACED

The University of Colorado Boulder was highly rated in a number of subject areas in the latest World University rankings by Quacquarelli Symonds Ltd. (QS). END_OF_DOCUMENT_TOKEN_TO_BE_REPLACED
Return to the top of the page