An international research team led by the University of Colorado Boulder has generated the first laser-like beams of X-rays from a tabletop device, paving the way for major advances in many fields including medicine, biology and nanotechnology development.

For half a century, scientists have been trying to figure out how to build a cost-effective and reasonably sized X-ray laser that could, among other things, provide super-high-resolution imaging, according to Henry Kapteyn, a CU-Boulder physics professor and fellow at JILA, a joint institute of CU-Boulder and the National Institute of Standards and Technology. Such a device also could be used by scientists to peer into a single cell or chemical reaction to gain a better understanding of the nanoworld.

Most of today’s X-ray lasers require so much power that they rely on facilities the size of football stadiums or larger, making their use impractical. To avoid the need for a large energy source to power an X-ray laser, the CU-Boulder researchers have created a tabletop device that uses atoms in a gas to efficiently combine more than 5,000 low-energy mid-infrared laser photons to generate each high-energy X-ray photon, said Margaret Murnane, a CU-Boulder physics professor and JILA fellow who is co-leading the research efforts.

“Because X-ray wavelengths are 1,000 times shorter than visible light and they penetrate materials, these coherent X-ray beams promise revolutionary new capabilities for understanding and controlling how the nanoworld works on its fundamental time and length scales,” Murnane said. “Understanding the nanoworld is needed to design and optimize next-generation electronics, data and energy storage devices and medical diagnostics.”

The findings will appear June 8 in the journal Science.

The tabletop device -- an X-ray tube in the soft X-ray region -- produces a bright, directed beam of X-rays by ensuring that all of the atoms in a multi-atmosphere pressure gas emit X-rays, according to Kapteyn.

“As an added advantage, the X-rays emerge as very short bursts of light that can capture the fastest processes in our physical world, including imaging the motions of electrons,” Kapteyn said.

Laser beams, which are visible light, represent one of the best ways to concentrate energy and have been a huge benefit to society by enabling the Internet, DVD players, laser surgery and a host of other uses.

“However, the same revolution that happened for visible light sources that made it possible to create laser-like beams of light for widespread use instead of multidirectional light from a light bulb, is only now happening for X-rays,” Kapteyn said. 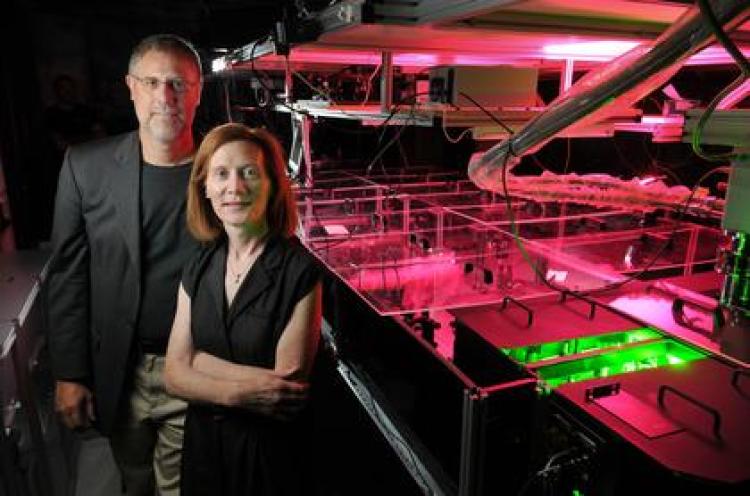 CU-Boulder physics professors and JILA fellows Henry Kapteyn and Margaret Murnane stand next to one of their laser devices. (Photo by Glenn Asakawa/University of Colorado)

When SpaceX CRS-23 launched to the International Space Station on Aug. 29, it carried with it a milestone for CU Boulder: the 80th mission to carry a payload from BioServe Space Technologies. END_OF_DOCUMENT_TOKEN_TO_BE_REPLACED

From diving Neanderthals to saliva-based COVID-19 tests, we remember the year in research at CU Boulder. END_OF_DOCUMENT_TOKEN_TO_BE_REPLACED

Astronaut ice cream—the crunchy, freeze-dried, pale imitation of the real thing—may have met its match: The International Space Station is getting a real freezer. END_OF_DOCUMENT_TOKEN_TO_BE_REPLACED
Return to the top of the page