A series of papers published this month on ecological changes at 26 global research sites -- including one administered by the University of Colorado Boulder in the high mountains west of the city -- indicates that ecosystems dependent on seasonal snow and ice are the most sensitive to changes in climate.

The six papers appeared in the April issue of the journal BioScience.  The papers were tied to data gathered at sites in North America, Puerto Rico, the island of Moorea near Tahiti, and Antarctica, which are known as Long-Term Ecological Research, or LTER, sites and are funded by the National Science Foundation. CU-Boulder’s Niwot Ridge site, one of the five original LTER sites designated by NSF in 1980, encompasses several thousand acres of subalpine forest, tundra, talus slopes, glacial lakes and wetlands stretching up to more than 13,000 feet on top of the Continental Divide.

As part of the new reports, LTER scientists in association with NSF have come up with a new evaluation system of the research sites that brings in the “human dimension,” said CU-Boulder Professor Mark Williams, the principal investigator on CU’s Niwot Ridge LTER site.  “In the past we tried to look at pristine ecosystems, but those are essentially gone,” said Williams. “So we’ve come up with an approach that integrates human activities with our ecological research.”

One of the six papers, “Long-Term Studies Detect Effects of Disappearing Ice and Snow,” was led by Portland State University Professor Andrew Fountain and co-authored by several others, including Williams, a geography professor and a fellow at CU-Boulder’s Institute of Arctic and Alpine Research.  According to the authors, there are big changes occurring in temperate areas beyond the poles, where warming temperatures have triggered declines in polar bear and penguin populations.

Key measurements at the Niwot Ridge site -- which has climate records going back more than 60 years thanks to pioneering work by CU biology Professor John Marr in the 1950s -- are temperature and precipitation logs from two stations, one at 12,700 feet in elevation and a second at 10,000 feet.  Although the climate at the higher meteorological station -- by far the highest long-term climate station in the United States -- has been getting slightly wetter and cooler in recent decades, the station at 10,000 feet in a subalpine forest is getting significantly warmer and drier.

Williams said warming at 10,000 feet and lower may be causing enhanced surface water evaporation and transport that moves westward and higher in the mountains, with the water vapor being converted to snow that falls atop the Continental Divide.  Snow cover increases reflectivity of incoming sunlight, further cooling the alpine area and overriding the overall warming signal in the West, which is believed to be a 2 or 3 degree Fahrenheit rise over the past decade due to rising greenhouse gases.

“These two Niwot Ridge stations are less than five miles away from each other -- you can see one from the other -- but there are totally different trends occurring,” he said. In many places in the mountainous West, only a small increase in temperature can cause the climate to cross a “threshold” that triggers earlier and more intense snow melting, said Williams, principal investigator on a 2011 grant of $5.9 million from NSF to CU to continue long-term ecological studies at Niwot Ridge.

With snowpack roughly half of normal in 2012 and snow melting in the high country that began more than three months earlier than last year, the outlook is not good for montane and subalpine forests in Colorado and other parts of the West, he said.

Low snowpack and early melt invariably have a huge impact on the Colorado economy, said Williams.  Despite near record snowfall in 2010-11, warming temperatures have caused less snow and shorter winters in recent years and affected the ski industry -- one of Colorado’s largest economic drivers, said Williams.

As for the future of flora and fauna in subalpine and alpine regions like Niwot Ridge, there will be “winners and losers” as the climate warms, said Williams. Animals like American pikas, potato-sized denizens of alpine talus slopes in the West, need heavy snowpack to insulate them from cold winters as they huddle in hay piles beneath the rocks. In lower, more isolated mountain ranges in Nevada, researchers are already seeing a marked decline in American pika populations.

The predictions of the study authors are that microbes, plants and animals that depend on snow and ice will decrease if they are unable to move higher into areas of snow and ice.  But shallower snow could cause big game like deer and elk to move higher in altitude to browse, according to the authors.

A big concern in temperate mountains like Colorado is the heath and welfare of coniferous trees as the climate changes, said Williams. “Trees in Colorado’s mountains are under a tremendous amount of stress due to drought and pine beetle outbreaks.  And the fire danger, at least now, is through the roof,” he said.

“If some of these forested areas disappear, I think the chances of them coming back are pretty low,” Williams said. “The climate they grew up in doesn’t exist anymore.  As we lose trees to drought, beetles and wildfires, we are likely to see an invasion of grasses and shrubs in areas where we have never seen them, causing a complete restructuring of our forest community.”

As snowline moves up due to warming temperatures, so will parts of alpine tundra in the West, Williams said. “The tundra may be able to function reasonably well for several decades -- it will be awhile before warming climate change pushes the tundra off the tops of mountains.  But that is the direction we are heading.”

Williams co-authored three of the six BioScience studies, including the main LTER overview paper and a paper on ecosystem and human influences on stream flow in response to climate change at LTER sites. CU-Boulder Professor Tim Seastedt was a co-author on another of the papers, a study on the past, present and future roles of long-term experiments in the LTER network.

The 2011 NSF renewal grant to CU-Boulder for the Niwot Ridge LTER site, which is adjacent to CU-Boulder’s Mountain Research Station, will allow faculty and students, including undergraduates, to continue key environmental studies there.  Both sites are located about 25 miles west of Boulder. 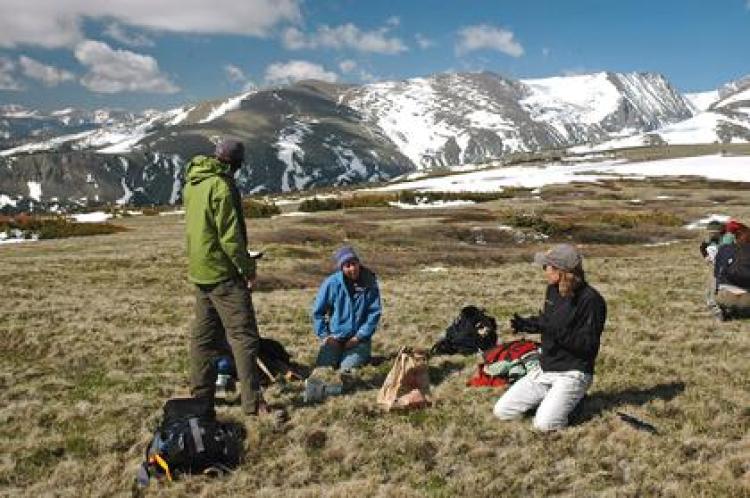 “If some of these forested areas disappear, I think the chances of them coming back are pretty low,” said CU-Boulder Professor Mark Williams, the principal investigator on CU’s Niwot Ridge LTER site. “The climate they grew up in doesn’t exist anymore. As we lose trees to drought, beetles and wildfires, we are likely to see an invasion of grasses and shrubs in areas where we have never seen them, causing a complete restructuring of our forest community.”
Categories:

Awake too early when you should be asleep? Might want to try and switch things up. A new study by the University of Colorado shows that the longer people are awake during the time their biological clock is telling them to sleep the worse their sensitivity to insulin, which is a precursor to diabetes. END_OF_DOCUMENT_TOKEN_TO_BE_REPLACED

On Thursday, Oct. 29, at 4 p.m. in UMC 235, Institute of Arctic and Alpine Research Fellow and Professor of civil, environmental and architectural engineering Diane McKnight will present, “The McMurdo Dry Valleys, Antarctica: Ecosystems waiting for water” as part of the 2015 Distinguished Research Lecturer series. END_OF_DOCUMENT_TOKEN_TO_BE_REPLACED

SuviCa Inc. of Boulder, a University of Colorado Boulder biotech start-up company, has been awarded roughly $1.5 million in federal funding to develop novel treatments for head and neck cancer. END_OF_DOCUMENT_TOKEN_TO_BE_REPLACED
Return to the top of the page