“Our achievements toward zero-waste reflect the efforts of an outstanding team committed to this initiative,” said CU Athletic Director Mike Bohn. “Being a national leader in the EPA challenge would not have been possible without the dedication and tireless efforts of campus leaders and the cooperation of event sponsors and vendors. The enthusiasm and willingness of fans, led by our students, has been key in driving the success of this endeavor.”

Data for CU’s competition in the EPA challenge was taken from the Oct. 22, 2011, home football game against the University of Oregon. Measures that marked CU as the division winner in “Diversion Rate” and “Organics Reduction” included diverting nearly 88 percent of total gameday waste from landfills. Also, about 2.5 ounces of organic materials per person were diverted from landfills and composted or donated instead.

“One of the most exciting aspects of this whole effort has been the reduction in overall waste generated despite record attendance and food sales,” said Edward von Bleichert, CU-Boulder environmental operations manager. “Compared to 2008, the 2011 season produced 21 percent less total waste per game and sent 44 percent less trash to the landfill per game due to aggressive composting and recycling efforts.”

According to the EPA, 2.7 million game-goers involved in the 2011 challenge from 78 participating colleges and universities diverted more than 500,000 pounds of waste from football games, preventing nearly 810 metric tons of carbon dioxide from being released into the atmosphere. That is the equivalent of the annual emissions from 159 passenger vehicles.

CU also competed in the EPA’s 2009 inaugural Game Day Challenge against seven other schools, winning in the “Diversion Rate” and “Waste Reduction” categories.

In 2008, CU became the nation’s first major college football program to commit to zero-waste at football games through its own Ralphie’s Green Stampede initiative, later extending the same efforts to all athletics events.

“We would be remiss if we did not salute Boulder County’s own White Wave Foods for its inspiration and support in creating Ralphie’s Green Stampede,” said Bohn. 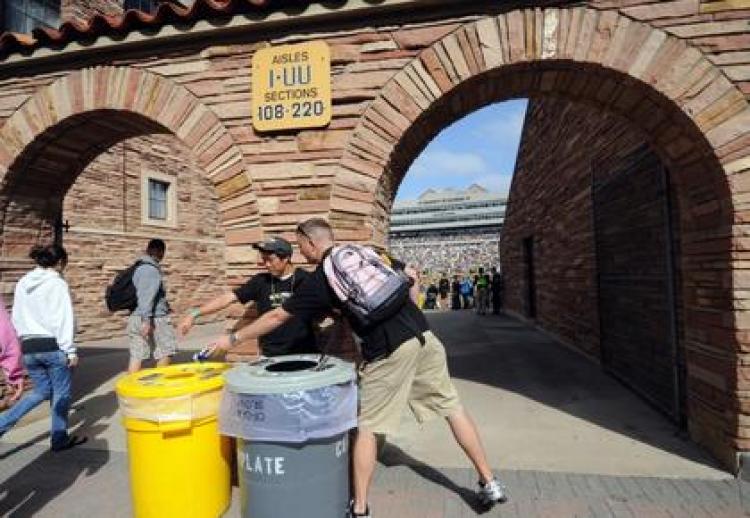 A CU game-goer uses a recyclables and compostables sorting station -- available instead of trash cans through the Ralphie's Green Stampede zero-waste initiative.

“One of the most exciting aspects of this whole effort has been the reduction in overall waste generated despite record attendance and food sales,” said Edward von Bleichert, CU-Boulder environmental operations manager. “Compared to 2008, the 2011 season produced 21 percent less total waste per game and sent 44 percent less trash to the landfill per game due to aggressive composting and recycling efforts.”
Categories:

University of Colorado Boulder student Andrew Nelson has been awarded a prestigious Goldwater Scholarship. The scholarship is worth up to $7,500 and recognizes sophomores and juniors who have achieved high academic merit and who are expected to be leaders in their fields. END_OF_DOCUMENT_TOKEN_TO_BE_REPLACED 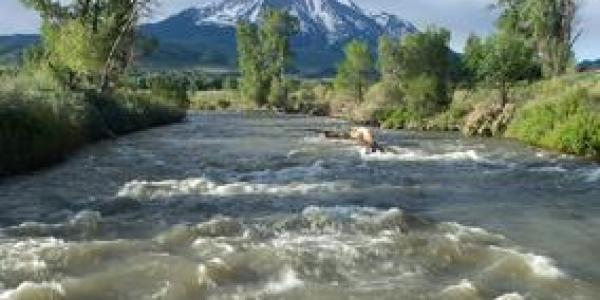 Spectators at home basketball games will be prompted to text a pledge to conserve water a s part of CU-Boulder's new Water for the West campaign. For every pledge received, CU Athletics will restore 1,000 gallons of water to the Colorado River Basin through a partnership with the Change the Course initiative. END_OF_DOCUMENT_TOKEN_TO_BE_REPLACED

Community, tribal and K-12 groups are invited to submit project proposals that explore impacts of oil and gas development on their local communities with support from the AirWaterGas Sustainability Research Network based at the University of Colorado Boulder. The grants of up to $5,000 each aim to improve understanding of the risks and benefits of oil and gas development as identified by community organizations. Grant recipients will work with AirWaterGas researchers for the duration of their one-year projects. END_OF_DOCUMENT_TOKEN_TO_BE_REPLACED
Return to the top of the page