Nap-deprived tots may be missing out on more than sleep, says new CU-led study

A new study led by the University of Colorado Boulder could be a wake-up call for parents of toddlers: Daytime naps for your kids may be more important than you think.

The study shows toddlers between 2 and a half and 3 years old who miss only a single daily nap show more anxiety, less joy and interest and a poorer understanding of how to solve problems, said CU-Boulder Assistant Professor Monique LeBourgeois, who led the study. The results indicate insufficient sleep alters the facial expressions of toddlers -- exciting events are responded to less positively and frustrating events are responded to more negatively, she said.

"Many young children today are not getting enough sleep, and for toddlers, daytime naps are one way of making sure their ‘sleep tanks' are set to full each day," she said. "This study shows insufficient sleep in the form of missing a nap taxes the way toddlers express different feelings, and, over time, may shape their developing emotional brains and put them at risk for lifelong, mood-related problems."

LeBourgeois and her colleagues assessed the emotional expressions of healthy, nap-deprived toddlers one hour after their normal nap time, and tested them again on another day following their normal nap. The study, believed to be the first to look at the experimental effects of missing sleep on the emotional responses of young children, indicates the loss of a nap -- in this case in just 90 minutes -- may make toddlers unable to take full advantage of exciting and interesting experiences and to adapt to new frustrations, she said.

"Just like good nutrition, adequate sleep is a basic need that gives children the best chance of getting what is most important from the people and things they experience each day," said LeBourgeois of the integrative physiology department.

In the study, the toddlers' faces were videotaped while they performed "kid-friendly" picture puzzles, including those of farm animals, sea creatures and insects. One puzzle each child worked had all of the correct pieces, which gave him or her the opportunity to experience and express positive emotion, she said. A second puzzle had a "wrong" piece and therefore was frustrating to the toddlers in the study because it was unsolvable.

Facial expressions of the toddlers were coded on a second-by-second basis for emotions like joy, interest, excitement, sadness, anger, anxiety, disgust, shame and confusion.

The study showed nap-deprived toddlers completing the solvable puzzles had a 34 percent decrease in positive emotional responses compared to the same children completing similar puzzles after their usual midday naps. The study also showed a 31 percent increase in negative emotional responses of nap-deprived toddlers when they attempted to complete unsolvable puzzles when compared with puzzle-solving attempts after they had napped.

In addition, the study found a 39 percent decrease in the expression of "confusion" when nap-deprived toddlers attempted to put together unsolvable puzzles. "Confusion is not bad -- it's a complex emotion showing a child knows something does not add up," said LeBourgeois. "When well-slept toddlers experience confusion, they are more likely to elicit help from others, which is a positive, adaptive response indicating they are cognitively engaged with their world."

A paper on the subject recently appeared online and will be published in an upcoming issue of the Journal of Sleep Research. Co-authors included Rebecca Berger and Ronald Seifer of Bradley Hospital in East Providence, R.I., Alison Miller of the University of Michigan School of Public Health and Stephanie Cares of Boston College. The study was funded by the National Institute of Mental Health. The study participants were from Providence, R.I.

"The non-adaptive emotional effects we saw in toddlers who missed a single nap make us wonder how young kids who consistently don't get enough sleep deal with their complicated social worlds," said LeBourgeois, who undertook the study with colleagues while at Brown University.

The toddlers were kept on a strict sleep schedule of at least 12 and a half hours of nighttime and daytime sleep for at least five days before the emotion-testing sessions. Having children follow a set sleep schedule before testing is important because it synchronizes their circadian cycles and makes sure the participants are well-slept prior to the nap and no-nap emotional assessments.

"A sleepy child in a classroom or daycare environment may not be able to engage with others and benefit from positive interactions," she said. "Their coping skills decrease and they may be more prone to tantrums or frustration, which would affect how other children and adults interact with them. This study shows that missing even a single nap causes them to be less positive, more negative and have decreased cognitive engagement."

Similar interactions in the home setting could affect parent-child relationships and a child's quality of life, LeBourgeois said.

The toddlers in the study all wore devices on their wrists that measured their sleep patterns. The parents also kept daily diaries documenting their toddlers' sleep.

"The goal of our study was to understand how losing sleep affects the way young kids respond emotionally to their world," said LeBourgeois. "This is important because toddlerhood is a sensitive period for developing strategies to cope with emotions and a time children naturally lose some sleep as they begin giving up their daytime naps."

Le Bourgeois and her colleagues are now recruiting 40 families with 2-year-olds from the Boulder area for a toddler-sleep study that involves how sleep restriction may affect not only emotion, but also higher levels of cognition known as executive function, which includes working memory and inhibitory control. "These are the building blocks for lifelong learning," she said.

LeBourgeois currently has eight undergraduates working in her CU-Boulder lab. "My students are incredible," she said. "The work we do here gives them a hands-on opportunity to learn about research with children and families, to think critically, and to analyze and present their findings at scientific meetings. They are very important to me, and their insight and passion keep me young." 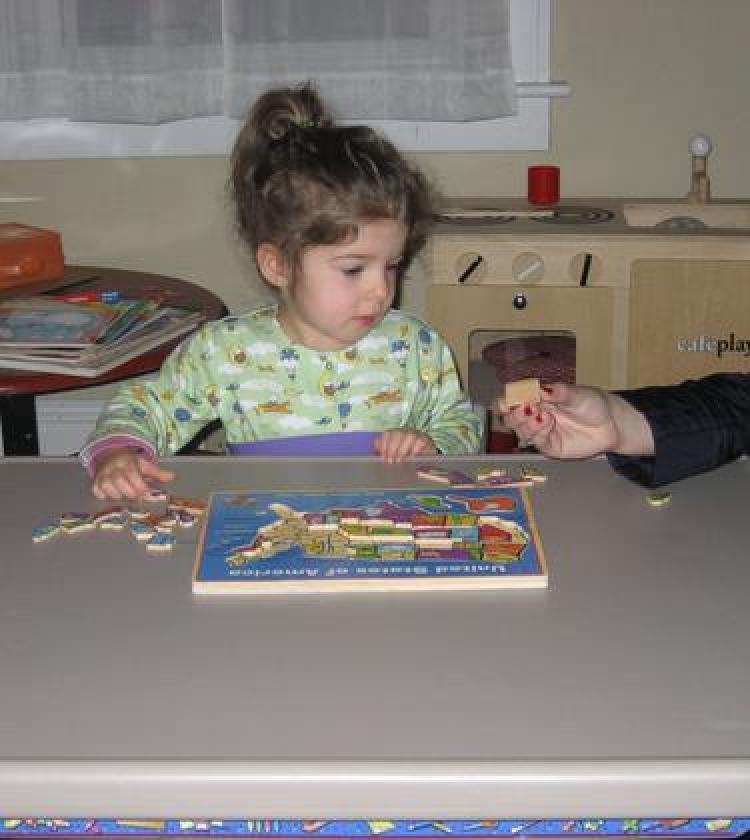 "Many young children today are not getting enough sleep, and for toddlers, daytime naps are one way of making sure their ‘sleep tanks' are set to full each day," said CU-Boulder Assistant Professor Monique LeBourgeois.
Categories:

What happens when an expert on natural language processing asks a chatbot to write a children's book in the style of Dr. Seuss? Professor Kai Larsen put the question to the test. END_OF_DOCUMENT_TOKEN_TO_BE_REPLACED

A model of your very own kidney made entirely from soft and pliable polymers? Researchers at two CU campuses are on the cusp of 3D printing realistic replicas of human anatomy. END_OF_DOCUMENT_TOKEN_TO_BE_REPLACED

For people who are blind or visually impaired, finding the right products in a crowded grocery store can be difficult without help. A team of computer scientists at CU Boulder is trying to change that. END_OF_DOCUMENT_TOKEN_TO_BE_REPLACED
Return to the top of the page