A University of Colorado Boulder team will be part of a mission selected yesterday by NASA to launch a spacecraft to an asteroid and pluck samples from its surface to better understand the formation of the solar system and perhaps even the first inklings of life.

The mission, called the Origins-Spectral Interpretation-Resource Identification-Security-Regolith Explorer, or OSIRIS-REx, is being led by the University of Arizona and is slated to approach, map and collect samples from a primitive asteroid for return to Earth. Professor Daniel Scheeres of CU-Boulder's aerospace engineering sciences department is the radio science team leader on the OSIRIS-REx mission, which is expected to bring more than $3 million in research funding to CU-Boulder over the mission lifetime.

The NASA selection of the asteroid mission as part of the New Frontiers Program was a disappointment for CU-Boulder scientists at the Laboratory for Atmospheric and Space Physics led by Professor Larry Esposito, science team leader on a proposed, unmanned mission to land on Venus as part of the program. In 2009 the LASP-led SAGE mission to Venus was named one of three finalists along with OSIRIS-REx and a proposed effort led by Washington University in St. Louis to sample and return material from the far side of the moon.

Scheeres said that at least one CU-Boulder postdoctoral researcher and additional graduate students will be involved in the mission operations, software development and research.

Slated to launch in 2016, the spacecraft will fly to within three miles of the asteroid -- dubbed "1999 RQ36 -- in 2020 and begin a six-month, comprehensive mapping project, said Scheeres. The OSIRIS-Rex spacecraft will subsequently conduct a "touch-and-go" on the asteroid, spending about 10 seconds on its surface as a robotic arm collects several ounces of asteroid material for return to Earth, he said.

The mission, excluding the launch vehicle, is expected to cost about $800 million, according to NASA officials.

The mission is in line with objectives outlined by President Barack Obama to reach beyond low-Earth orbit to explore deep space, according to NASA officials, evolving from robotic missions like OSIRIS-REx to future manned missions to asteroids and beyond.

A 2010, study by Scheeres and his colleagues showed that asteroids were not just giant rocks lumbering about in orbit, they are instead constantly changing little "worlds" than can give birth to smaller asteroids that split off to start their own lives as they circle the sun. 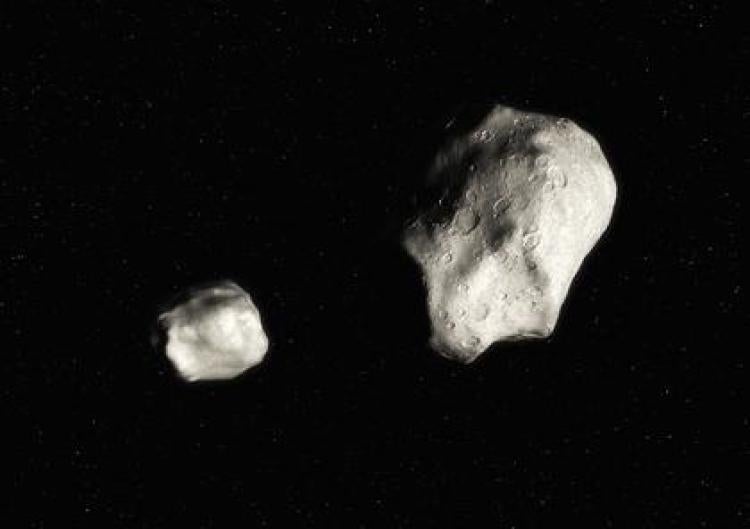 Illustration of a pair of asteroids. (Courtesy NASA)

When he was in high school, Daniel Pette was fascinated by stars. When his earth science teacher told him that massive stars die out faster than smaller ones, Pette diagrammed a theory to figure out why this was. When he discovered that his findings were correct, Pette became determined to pursue a career in astrophysics. END_OF_DOCUMENT_TOKEN_TO_BE_REPLACED

CU-Boulder's Penina Axelrad , professor and chair of the Department of Aerospace Sciences, received the 2015 Aerospace Educator Award from the Women in Aerospace association. END_OF_DOCUMENT_TOKEN_TO_BE_REPLACED

It’s August and that means the hottest show in the night sky -- the Perseid meteor shower -- will make its annual appearance, peaking in the pre-dawn hours of Aug. 11 to 14. END_OF_DOCUMENT_TOKEN_TO_BE_REPLACED
Return to the top of the page