Rising concentrations of zinc in a waterway on Colorado's Western Slope may be the result of climate change that is affecting the timing of annual snowmelt, says a new study led by the University of Colorado at Boulder.

The study focused on the Snake River watershed just west of the Continental Divide near Keystone, Colo., where CU-Boulder researchers have observed a four-fold increase in dissolved zinc over the last 30 years during the lowest water flow months, said Caitlin Crouch. Crouch, a master's degree student who led the study, said the high levels of zinc affect stream ecology, including deleterious effects on microbes, algae, invertebrates and fish.

The team speculated the increased zinc concentrations may be tied to changes in groundwater conditions and stream flow patterns caused by climate change and the associated snowmelt that has been peaking two to three weeks earlier than normal in recent years, largely because of warming air temperatures. The result is lowered stream flows and drier soils along the stream in September and October, which increases metal concentrations, said Crouch.

"While most of the talk about climate change in western waterways is about decreasing water quantities, we are evaluating potential climate influences on water quality, which is a whole different ball game," she said.

Crouch gave a presentation on the subject at the fall meeting of the American Geophysical Union held in San Francisco Dec. 13-17. The study was co-authored by Professor Diane McKnight of CU-Boulder's civil and environmental engineering department.

The zinc in the Snake River watershed is primarily a result of acid rock drainage, or ARD, which can come from abandoned mine sites along rivers or through the natural weathering of pyrite in the local rock, said Crouch. Sometimes enhanced by mining activity, weathering pyrite forms sulfuric acid through a series of chemical reactions, which dissolves metals like zinc and carries them into the groundwater.

McKnight, also a fellow of CU-Boulder's Institute of Arctic and Alpine Research, said there are nearly 2,000 miles of waterways in Colorado affected by ARD.

One of the most noticeable impacts of ARD in the Upper Snake River drainage is on the fishery downstream, said Crouch, a graduate student in CU-Boulder's Environmental Studies Program. Rainbow trout populations in much of the river are not self-sustaining because of ecologically harsh stream conditions, and the waterway requires stocking several times a year.

The elevated zinc in the Snake River comes from several ARD sources, said Crouch. Crouch's study site -- where an increasing trend in zinc concentrations is sustained by groundwater discharge -- is above the Peru Creek tributary to the Snake River, where natural pyrite weathering is thought to be the main source of ARD. Peru Creek is largely devoid of life due to ARD from the abandoned Pennsylvania Mine and other smaller mines upstream and has been a target for potential remediation efforts.

McKnight said another factor involved in rising zinc levels in the Snake River watershed -- which runs from the top of the Continental Divide to Dillon Reservoir -- could be the result of the severe 2002 drought in Colorado. The drought significantly lowered waterways, allowing more pyrite to be weathered in dry soils of the watershed and in wetlands adjacent to the stream.

As part of her study, Crouch measured zinc concentrations in an alpine tributary of the Upper Snake River. She found that zinc concentrations there were 10 times higher than in the main stem of the waterway and correlated with increased sulfate, so-called "hard water" containing calcium and magnesium, and a variety of metals.

"This supports our contention that the increasing zinc concentrations we are seeing in the watershed are driven by the acceleration of ARD," Crouch said. "One of the things I still am trying to parse out is whether metals like zinc are coming from one discrete source or are being diffused into the watershed from the groundwater beneath."

Cleaning up abandoned, polluted mines like the Pennsylvania Mine remains a problem largely because of liability issues since the mine owners who normally would be responsible for the mine cleanup are long gone. The Environmental Protection Agency has begun an agency-wide effort to reduce barriers to the cleanup of abandoned mine sites by local environmental groups and volunteers.

In the case of the Pennsylvania Mine, the Snake River Task Force is working with partners like the Keystone Ski Resort, the Keystone Center, Trout Unlimited, the Northwest Colorado Council of Governments, Summit County, the Colorado Department of Public Health and Environment, the EPA and the Blue River Watershed Group.

Seven CU-Boulder graduate students have produced master's and doctoral theses under McKnight on environmental issues related to the Snake River watershed. Copies of the studies have been provided to the Snake River Task Force to help assess the current and future stream chemistry and biology in the area. 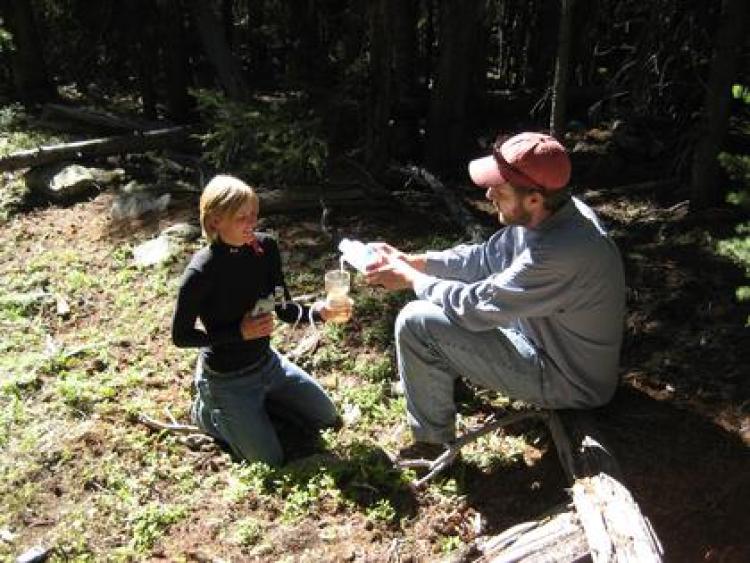 A CU-Boulder research team has been studying rising zinc levels in the Snake River drainage, which runs from the top of the Continental Divide to Dillon Reservoir. Photo courtesy University of Colorado.

University of Colorado faculty research merited $878.3 million in research awards during the 2014-15 fiscal year, based on preliminary figures, representing a near-record year for the four-campus system. END_OF_DOCUMENT_TOKEN_TO_BE_REPLACED

The University of Colorado Boulder was highly rated in a number of subject areas in the latest World University rankings by Quacquarelli Symonds Ltd. (QS). END_OF_DOCUMENT_TOKEN_TO_BE_REPLACED
Return to the top of the page