Jon Embree, a stalwart tight end for the University of Colorado in the mid-1980s and a one-time assistant coach for the school, has been selected by athletic director Mike Bohn to be the Buffaloes' next head football coach, school officials announced Monday.

Embree, 45, becomes the 24th full-time coach in the school's history, the 26th overall including two interim coaches, and the first African-American named to the position. He had been in his first year under former Denver Bronco head coach Mike Shanahan as an assistant coach with the Washington Redskins in the National Football League, which followed three years in a similar position with the Kansas City Chiefs.

Bohn offered Embree a five-year contract which the former Buff accepted late Saturday evening; the contract is subject to the approval of CU's Board of Regents. Embree thus fills the vacancy created when former head coach Dan Hawkins was relieved of his duties on November 9 after posting a 19-39 record over the better part of five seasons.

Also returning to Colorado as offensive coordinator is Eric Bieniemy, the school's all-time leading rusher, who is the assistant head coach and running backs coach for the Minnesota Vikings. Bieniemy and Embree coached together on Gary Barnett's 2001 and 2002 staffs, the former squad winning CU's only Big 12 Conference title, while both claimed North Division titles in going 14-2 in league play over two seasons.

Embree concluded his tenure as tight ends coach with the Redskins Sunday in New York, where he met with Bohn and search committee chairman David Clough a day earlier. They all returned to Colorado following the game, stopping in Minneapolis on the way to pick up Bieniemy, who will have double duty finishing out the last month of the season with the Vikings before beginning almost if not all of his CU duties.

"This is a dream come true," Embree said. "When I stepped on the field for my first spring practice here as a volunteer coach (in 1991), I started to envision what it would be like to come back one day and be the head coach of this great university. It's truly a privilege when you have the opportunity to become head coach at your alma mater.

"I'm extremely excited to meet the players, get with those guys and begin the process of putting the luster back to the program. For whatever reason or reasons, the program just hasn't been representative of all it can be for the last several years. But Colorado has a great tradition and with the staff I believe I can assemble, our aim will be to restore the program to national prominence."

Embree, in fact, will be just the third head football coach who graduated from the school; he earned his degree in Communication in 1987. The last was Bud Davis ('51), who coached for one season (1962) to steady the waters after the Sonny Grandelius era, with the only other, Harry Heller, also coaching just one year, leading Colorado to an 8-1 record in 1894; Heller was an 1885 CU graduate.

The first-time head coach will inherit a squad that has 57 lettermen returning, including 16 starters, from a team that finished 5-7 in 2010, going 3-9 under Hawkins and 2-1 under interim head coach, Brian Cabral. In that group are seven players who earned some kind of all-conference honors, including two juniors who were second-team performers, tailback Rodney Stewart (1,318 rushing yards) and defensive end Josh Hartigan (seven quarterback sacks, one interception).

"There is no question Jon is a great Buffalo, and we're all excited he's coming home," Bohn said. "He's a man of great character and vision who loves the University of Colorado. As a high school student-athlete, he could have gone anywhere in the country and he chose CU at a time the program had been struggling for a number of years. He was a pivotal contributor in helping to turn the fortunes around some 25 years ago, and we are excited he's agreed to come back and lead us into the Pacific-12 Conference."

"Jon Embree is a great hire for the University of Colorado at a great time in our history," said CU-Boulder Chancellor Philip P. DiStefano. "Jon was a legendary Buff who embodied the best of CU's values on and off the field. I believe his achievements as a student-athlete, a coach and a person will combine to lead our program into a new era of success. We are excited to welcome him home, and are looking forward to next season."

Embree will become just the fourth African-American head coach in Pacific-12 Conference football history when CU joins the league next July. Dennis Green was the first when he coached at Stanford (1989-91), followed by Ty Willingham, also at Stanford (1995-2001), and then former Colorado assistant Karl Dorrell at UCLA (2003-07); Willingham also was the head coach at Washington (2004-08). Nationally, Embree is the fifth African-American head coach among the 66 BCS schools and the 15th minority overall at the 120 Football Bowl Subdivision programs.

After a stellar prep career at Cherry Creek High School in Englewood, Embree would become a four-year letterman for the Buffaloes, playing immediately as a true freshman in 1983 when he earned the school's Lee Willard Award as the school's most outstanding freshman. The following year, he earned first-team All-Big 8 honors in setting school single-season records for receptions (51) and receiving yards (680). When CU moved to the wishbone on offense for his junior year, his receiving numbers naturally went down but he established himself as one of the premier blocking tight ends in the game. He ended his career in the top five in both catches (80) and yards (1,116), numbers which still have him in the school's top 20 today.

A sixth round draft pick by the Los Angeles Rams in the 1987 NFL Draft, Embree played two seasons with the Rams before suffering a career-ending elbow injury in 1989 while a member of the Seattle Seahawks. He then soon turned his attention to coaching, and thus brings 18 years of coaching experience to the CU program, including 10 seasons (1993-2002) as an assistant on the Colorado staff under three different head coaches, Bill McCartney (1993-94), Rick Neuheisel (1995-98) and Gary Barnett (1999-2002).

He began his coaching career as a volunteer coach under McCartney in 1991. He then worked as an assistant coach at Douglas County (Colo.) High School the following year before returning to CU for his first full-time position in the profession, coaching the tight ends for the last two years of McCartney's tenure. Under Neuheisel, he swapped sides of the football and tutored the defensive ends for those four seasons, before mentoring the tight ends once again in Barnett's first two years. He then switched to coaching the receivers and placekickers the next two years (2001-02).

Embree and Bieniemy left Colorado at the same time to join Dorrell when he was named head coach at UCLA ahead of the 2003 season. Embree coached the receivers there his first season, and then was promoted to assistant head coach and passing game coordinator in addition to tight ends coach for the 2004 and 2005 seasons.

He has coached four of the best tight ends in football over the last decade, John Mackey Award winners Daniel Graham at Colorado and Marcedes Lewis at UCLA as well as CU's Christian Fauria, a 12-year professional, and perennial All-Pro Tony Gonzalez while with the Chiefs.

Embree is married to the former Natalyn Grubb, and the couple still has one child at home, daughter Hannah (14). They have raised two football-playing sons, who, in keeping with the CU family theme, are playing for two former Buff coaches. The eldest, Taylor, is a junior wide receiver at UCLA, where Neuheisel is head coach (he has 117 career receptions for 1,548 yards and two touchdowns), while Connor redshirted as a freshman receiver at UNLV under head coach Bobby Hauck, who was an assistant at Colorado under Neuheisel. Jon Embree was on coaching staffs with both Neuheisel (five seasons) and Hauck (four).

And of course, as many older Coloradoans will remember that his father John played two seasons with the Denver Broncos. He had several big plays at receiver in catching 33 passes for 519 yards and five touchdowns, including a 79-yard score.

Bieniemy, 41, rushed for 3,940 yards in his playing career, which spanned the 1987 through 1990 seasons; he was a member of two undefeated Big 8 Conference championship teams and the consensus national championship team in 1990. Like Embree, he played as a true freshman and also earned the Lee Willard Award. A two-time All-Big 8 performer (1988, 1990), he was a unanimous All-American as a senior and finished third in the Heisman Trophy balloting that year when he finished second in the nation rushing with 1,628 yards and 17 touchdowns. In his career, he scored 42 touchdowns, also a CU record, and is still second on the Buff scoring list with 254 points.

He is best remembered for scoring four touchdowns in the fourth quarter in a 27-12 win at Nebraska that ignited CU's run to the national championship, and for being selected to CU's All-Century Team in 1989, the only active player at the time to be selected to the 25-man team honoring the school's first 100 years of football.

A second round draft pick by San Diego in the '91 NFL Draft, he went on to play nine seasons in the league with the three different teams--the Chargers (1991-94), Cincinnati (1995-98) and Philadelphia (1999). After working as an assistant coach one year at Denver's Thomas Jefferson High School (2000), he then returned to CU as an assistant coach in the spring of 2001, and finished up his degree in Sociology in graduating in May of that same year.

In his two years as running backs coach at CU, he tutored two of the best running backs in school history, Bobby Purify and Chris Brown, who still stand third and sixth, respectively, on Colorado's all-time rushing yards list.

Bieniemy is married to the former Mia Maxie, and the couple has two children, Eric III (15) and Elijah (11).

Colorado announced earlier this year that it was leaving the Big 12 Conference to join the Pacific-10, which will be renamed the Pacific-12 Conference next July 1 when the Buffaloes and Utah become members. With the change, the football team may face one of the toughest schedules for a first-year coach in FBS history: eight of the 13 teams on the 2011 schedule at one point were ranked in 2010--six at one time appearing in the top 12. Five finished the year in the top 24 of the BCS Standings. 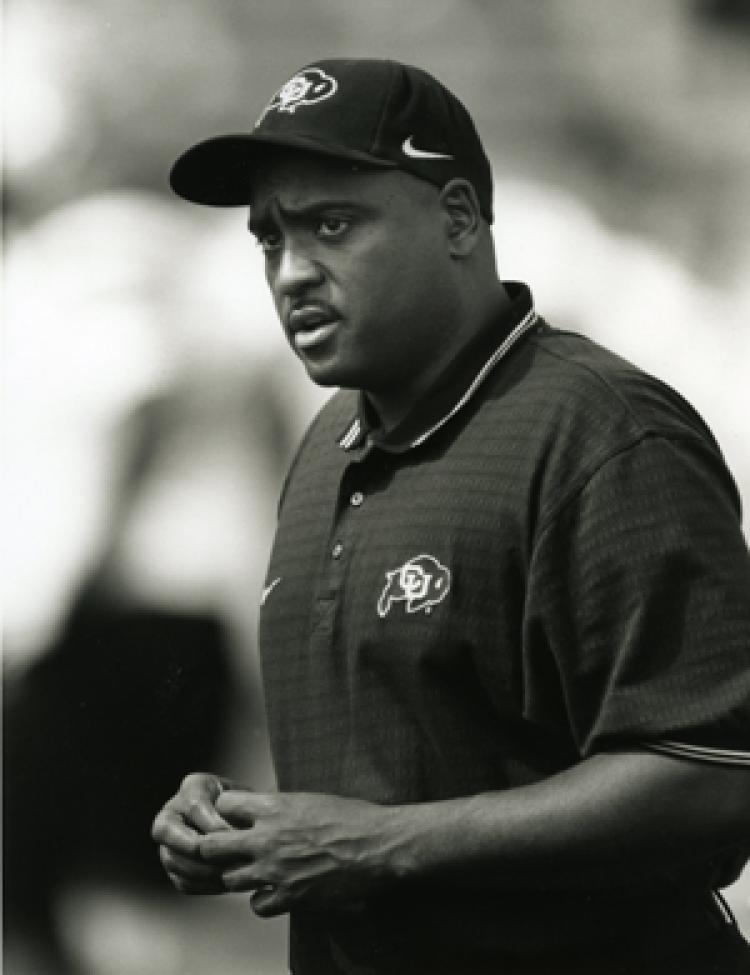 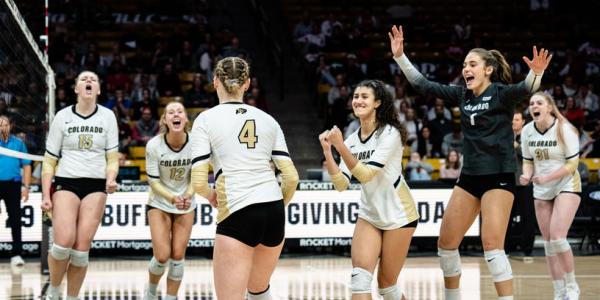 Meegan Hart and Lexi Hadrych were both honored with 2022 Pac-12 Women's Volleyball year-end accolades. Hart was selected as an All-Pac-12 team member, and Hadrych earned an honorable mention. END_OF_DOCUMENT_TOKEN_TO_BE_REPLACED 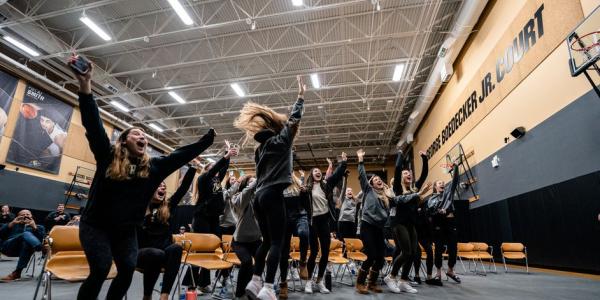 For the 21st time in Colorado volleyball history, the Buffs have advanced to the NCAA Tournament. CU will head to Baylor University in Waco, Texas, to play fifth-seed No. 20 Rice University in the first round. END_OF_DOCUMENT_TOKEN_TO_BE_REPLACED 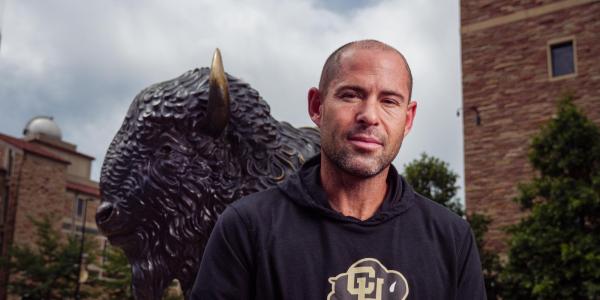 LeRoy is CU’s 18th head ski coach, replacing Richard Rokos after more than three decades with the Buffs. The former Olympian discusses leading CU’s only coed athletic team, what inspired him to coach and ways to generate revenue for collegiate skiing. END_OF_DOCUMENT_TOKEN_TO_BE_REPLACED
Return to the top of the page