A thick blanket of yellow haze hovering over Houston as a result of chemical pollution produced by manufacturing petroleum products may be getting a little bit thinner, according to a new study.

But the new findings -- which have implications for petrochemical-producing cities around the world -- come with a catch, says a team of scientists from the Cooperative Institute for Research in Environmental Sciences, or CIRES, a joint institute of the University of Colorado at Boulder and the National Oceanic and Atmospheric Administration.

The problem is that industry still significantly underestimates the amounts of reactive chemicals being released into the air, according to airplane measurements made by the research team as part of the study. Inaccuracies in the reporting of emissions pose big challenges for the reduction and regulation of emissions coming from petrochemical plants. The emissions are important to monitor, because some chemicals released from the plants react to form ground-level ozone that can be harmful to human health and agricultural crops.

"Emissions may have decreased some, but there's still a long way to go," said study author Joost de Gouw, a CIRES atmospheric scientist. "And the emission inventories by industry were not any better in 2006 than they were in 2000."

States that regularly suffer from ozone problems like Texas are required by the federal government to scientifically model what happens during air pollution episodes and develop plans for mitigation. For that to happen effectively, modelers need good inventories, says the research team.

"Initial inventories are not based on measurements. They're based on estimates," said de Gouw. "When you go back to verify those estimates, we find they're not very accurate."

To check on those estimates, lead study author Rebecca Washenfelder of NOAA's Earth System Research Laboratory and CIRES, along with de Gouw, took to the plumes in an aircraft, the NOAA WP-3D, outfitted with an array of air quality measuring instruments. The plane flew through emissions over Houston as part of the second Texas Air Quality Study in 2006, sampling air for signs of ingredients of the chemical reaction that makes ozone, including nitrogen oxides and reactive hydrocarbons.

Washenfelder, de Gouw and their study colleagues compared these measurements with data taken during similar flyovers from the first Texas Air Quality Study in 2000 and another flight in 2002. They then compared those measurements against emissions inventories for each year. In all cases, the industry-reported inventories -- which are supplied to the U.S. Environmental Protection Agency -- didn't agree with the measured amounts of pollutants.

The conflicting data is likely a problem of estimation and general industry practice. "There are tens of thousands of valves and fittings installed throughout the plants in most cases with an assumed -- not measured -- leak rate for each," Washenfelder said.

But industry is taking steps to lessen ozone-causing emissions, and repairs to petrochemical plants may have contributed to recent emission declines. Washenfelder and de Gouw found that the concentrations of ethene and propene -- which both contribute to ozone formation -- dropped by 52 percent and 48 percent respectively between 2000 and 2006.

The two scientists see the study as a wake-up call for emissions monitoring.

"There are a lot of discussions with the petrochemical industry on how to measure these things instead of relying on estimates," said de Gouw. "I think the No. 1 issue here is awareness. As soon as industry is aware that there could be emissions problems down the road, they can figure out how to fix them at lower cost."

The study been accepted for publication in the Journal of Geophysical Research  Atmospheres, a publication of the American Geophysical Union. Funding for the project came from NOAA Air Quality, NOAA Climate Research and Modeling Program, the Texas Commission on Environmental Quality and a National Research Council Postdoctoral Fellowship.

A podcast on the study can be heard at colorado.edu/news/podcasts/. 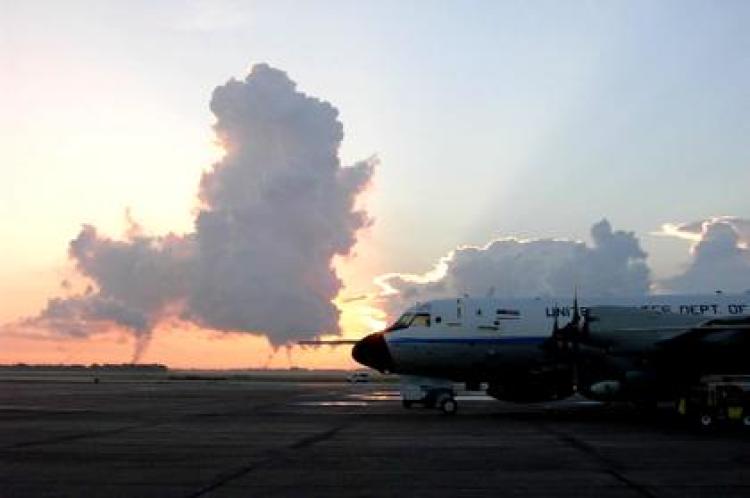 While petrochemical air pollution in Houston is decreasing, industry there still is underestimating the amounts of reactive chemicals released into the air that lead to ground-level ozone problems, according to a new study by a team of scientists at the Cooperative Institute for Research in Environmental Sciences, a joint institute of the University of Colorado at Boulder and the National Oceanic and Atmospheric Administration. Image of WD-P3 on the tarmac in Houston courtesy of CIRES. Photo by Bill Dube/NOAA

University of Colorado faculty research merited $878.3 million in research awards during the 2014-15 fiscal year, based on preliminary figures, representing a near-record year for the four-campus system. END_OF_DOCUMENT_TOKEN_TO_BE_REPLACED

The University of Colorado Boulder was highly rated in a number of subject areas in the latest World University rankings by Quacquarelli Symonds Ltd. (QS). END_OF_DOCUMENT_TOKEN_TO_BE_REPLACED
Return to the top of the page