Zonta International, through its foundation, has awarded Amelia Earhart Fellowships to 35 outstanding women pursuing doctoral degrees in aerospace-related sciences and engineering this year -- including six who are studying at the University of Colorado at Boulder.

Wagle is pursuing her doctorate in computer science, while the other five CU-Boulder recipients are working toward doctorates in aerospace engineering sciences. Hartzell and Stiles also received a fellowship last year.

The fellowships honor the legacy of Amelia Earhart, a famous aviation pioneer in the 1920s and 1930s, and a member of Zonta International, an organization working to advance the status of women worldwide through service and advocacy. Earhart, who was the first woman to fly solo across the Atlantic Ocean, encouraged women to expand their horizons by exploring occupations and holding positions beyond those traditionally held by women.

The fellowships are funded through annual contributions by the 31,000 members of Zonta International. Since the fellowship was established in 1938, a total of 1,297 fellowships totaling more than $7 million have been awarded to 902 fellows from 64 countries.

Following is a closer look at the CU-Boulder recipients and their areas of study:

-- Christine Hartzell is researching and modeling the transport of dust across the surface of asteroids, including the effects of gravity, solar radiation pressure and electrostatic forces. NASA has expressed interest in her work by awarding Hartzell the NASA Earth and Space Science Fellowship.

-- Jennifer Mindock is investigating how crew fatigue affects the risks associated with human space missions and developing a method to include the consideration of mitigation options in the design process. She has been a systems engineer at NASA's Jet Propulsion Laboratory since 2001 and works primarily on robotic space missions.

-- Aurore Sibois is studying the rotational behavior of the Earth and developing a customized estimation strategy that will enable the recovery of rotation parameters based on Global Positioning System observations. The work is part of an effort by a team at NASA's Jet Propulsion Laboratory to substantially improve the determination of geophysical quantities using GPS and to provide better products for use by geodetic, oceanographic and navigation scientists.

-- Laura Stiles is working on an analysis of the effects of the space environment on electrostatic control in space. Using a software program to model electrostatic forces and fields of charged objects to accompany future hardware tests, she will be able to create realistic simulations of spacecraft formations and better understand the dynamics of deploying structures with electrostatics.

-- Jill Tombasco is conducting research in the area of orbit estimation and prediction for close-proximity geosynchronous satellites. These satellites are used worldwide for communication, scientific, military and navigation purposes. This orbit regime is densely populated with at least 1,100 tracked objects and an unknown amount of orbital debris, and the danger of collision is a real threat. Her work improves the orbit determination and prediction for clustered geosynchronous satellites and debris.

-- Neeti Wagle is applying robotic and machine-learning techniques to cooperative sampling applications using unmanned aircraft. The focus of her research is on localization and mapping using radio frequency signals, which has the potential to impact a broad range of applications including target search and rescue, law enforcement, environmental monitoring and disaster response.

For more information go to www.zonta.org. 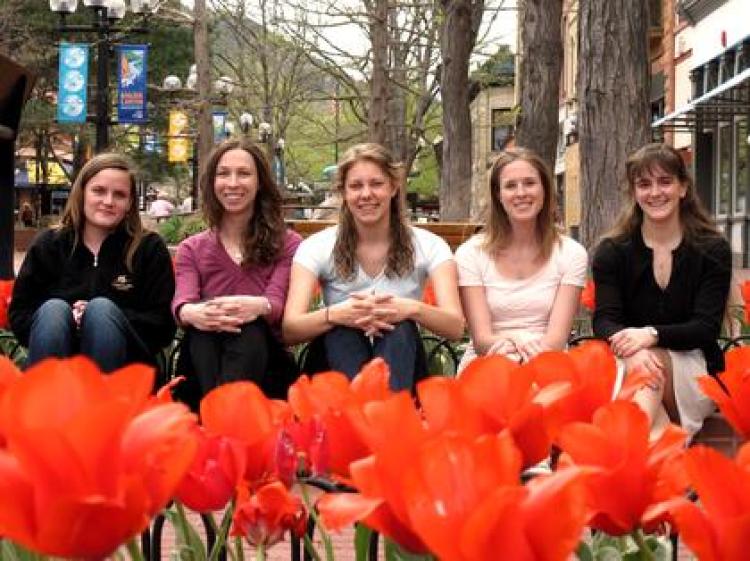 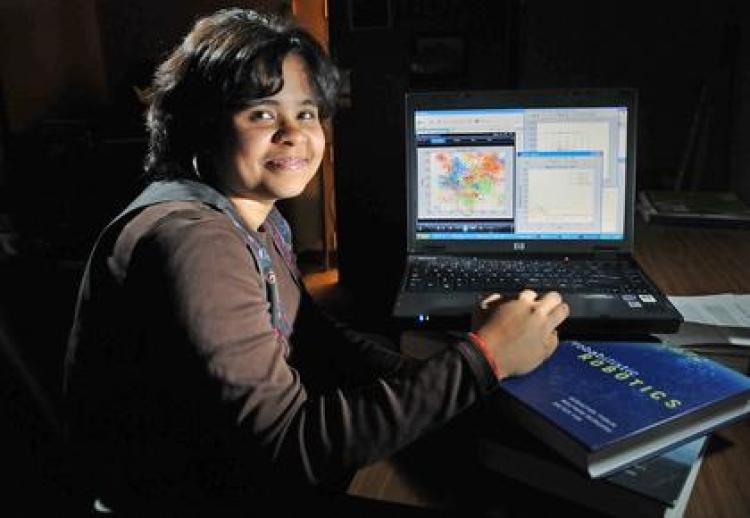 CU-Boulder doctoral students (from left to right, at top) Aurore Sibois, Jennifer Mindock, Laura Stiles, Jill Tombasco and Christine Hartzell were awarded Amelia Earhart Fellowships for 2010-11 by Zonta International. A sixth CU-Boulder recipient, Neeti Wagle, is pictured below. Top photo by Ann Brookover, bottom photo by Casey A. Cass, both of the University of Colorado

When he was in high school, Daniel Pette was fascinated by stars. When his earth science teacher told him that massive stars die out faster than smaller ones, Pette diagrammed a theory to figure out why this was. When he discovered that his findings were correct, Pette became determined to pursue a career in astrophysics. END_OF_DOCUMENT_TOKEN_TO_BE_REPLACED

CU-Boulder's Penina Axelrad , professor and chair of the Department of Aerospace Sciences, received the 2015 Aerospace Educator Award from the Women in Aerospace association. END_OF_DOCUMENT_TOKEN_TO_BE_REPLACED

It’s August and that means the hottest show in the night sky -- the Perseid meteor shower -- will make its annual appearance, peaking in the pre-dawn hours of Aug. 11 to 14. END_OF_DOCUMENT_TOKEN_TO_BE_REPLACED
Return to the top of the page