A research team led by the University of Colorado at Boulder has discovered a previously unknown cellular "switch" that may provide researchers with a new means of triggering programmed cell death, findings with implications for treating cancer.

The new results are a big step forward in understanding programmed cell death, or apoptosis, a cell suicide process that involves a series of biochemical events leading to changes like cell body shrinkage, mitochondria destruction and chromosome fragmentation, said CU-Boulder Professor Ding Xue. But unlike traumatic cell death from injury, programmed cell death is a naturally occurring aspect of animal development that may help prevent human diseases like cancer and autoimmune disorders, said Xue, lead author on the new study.

In the new study, Xue and his team found that a well-known cellular molecule called caspase  known as the "executioner enzyme" for apoptosis because of its primary role of cutting up and destroying cellular proteins -- has an entirely different effect on a particular enzyme called Dicer. The team found that when caspase cleaves Dicer, it does not kill it but instead changes its function, causing Dicer to break up chromosomes -- pieces of coiled DNA containing thousands of genes -- and kill the cells that house them.

"This finding was totally unexpected," said Xue of CU-Boulder's molecular, cellular and developmental biology department. "We believe that by understanding this mechanism, we may be able to develop a new way to trigger cell death in a controlled manner as a way to treat disease."

A paper on the subject appears in the March 12 issue of Science. Co-authors on the study included CU-Boulder postdoctoral researchers Akihisa Nakagawa and Yong Shi and Tokyo Women's Medical University researchers Eriko Kage-Nakadai and Shohei Mitani.

The normal function of Dicer is to snip strands of RNA into smaller pieces that attach to messenger RNA molecules -- which carry DNA's genetic messages from the nucleus of cells to make specific proteins in cell cytoplasm -- and silence their activity, said Xue. But when caspase comes in contact with Dicer, it takes away Dicer's ability to cleave RNA and it replaces it with the ability to snip up and destroy DNA-laden chromosomes.

The experiments were undertaken on a common, eyelash-sized nematode known as Caenorhabditis elegans, a popular laboratory organism for genetic and biomedical experiments. The study of cell death in C. elegans is providing critical information to scientists trying to understand cell death mechanisms in humans and identify ways to combat human diseases caused by "inappropriate apoptosis," Xue said.

"There are many enzymes whose job it is to cut RNA, and many unrelated enzymes whose job it is to cut DNA," said CU-Boulder MCD Biology Department Chair Tom Blumenthal, who studies RNA processing in C. elegans and who was not involved in the study. "But this is the first time that anyone has shown that it is possible to cleave an RNA-cutter enzyme and thereby convert it to a DNA-cutter enzyme."

As part of the study, the team "knocked out" the C. elegans gene that encodes the Dicer enzyme. The removal of the gene compromised the apoptosis process and blocked the fragmentation of chromosomes, said Xue.

Genetic studies of C. elegans have identified many genes that are important for the five sequential steps of programmed cell death, Xue said. They include the specification of which cells should die, the activation of the cell death program, the onset of the killing process, the engulfment of cell "corpses" and the degradation of cellular debris, said Xue.

"Our findings initially seemed too good to be true," said Xue, who said the team has been working on the project for five years. "We wound up looking at the results from a number of angles, including genetics, cell biology and biochemistry. Eventually we reached the only logical conclusions we could make."

"This is a completely novel finding, and all of the players in this story are well known, well studied aspects of a very important process in our lives," said Blumenthal. "The minute I saw the results, I knew it was a very, very important finding with wide implications."

Since the failure of apoptosis is one of the main contributors to the development of tumors, many biomedical researchers believe that a better understanding of the programmed cell death process could lead to potential therapeutic agents for those suffering from a number of diseases caused by abnormal apoptosis, said Xue. "The biomedical potential here is for researchers to be able turn a pro-survival enzyme into an enzyme that is pro-death," Xue said.

The Science study by Xue and his team was funded by the Burroughs Wellcome Fund and the National Institutes of Health.

The researchers are now investigating whether human cells have the mechanisms to convert the function of Dicer enzyme in the same manner as C. elegans cells, said Xue. Nearly half of the genes found in C. elegans are believed to have functional counterparts in humans, he said.

C. elegans is a key organism for scientists to study for several reasons, according to Xue. It was the first organism whose genome was completely sequenced, and its transparency under microscopes has allowed scientists to study many aspects of cellular and developmental biology, as well as genetics. Nobel prizes for C. elegans biomedical research were awarded in 2002, 2006 and 2008. 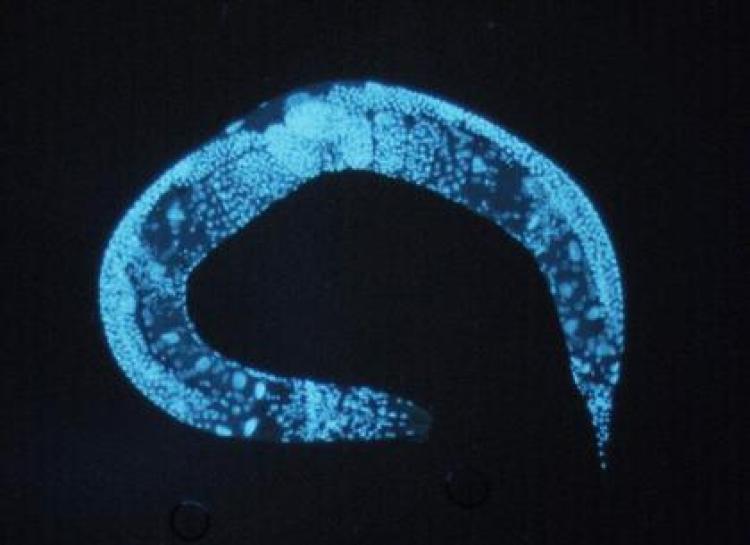 The discovery of a novel cellular “switch” in the popular laboratory research worm, C. elegans, by a University of Colorado at Boulder team may provide researchers with a new means of triggering programmed cell death in humans to treat disease.

What happens when an expert on natural language processing asks a chatbot to write a children's book in the style of Dr. Seuss? Professor Kai Larsen put the question to the test. END_OF_DOCUMENT_TOKEN_TO_BE_REPLACED

A model of your very own kidney made entirely from soft and pliable polymers? Researchers at two CU campuses are on the cusp of 3D printing realistic replicas of human anatomy. END_OF_DOCUMENT_TOKEN_TO_BE_REPLACED

For people who are blind or visually impaired, finding the right products in a crowded grocery store can be difficult without help. A team of computer scientists at CU Boulder is trying to change that. END_OF_DOCUMENT_TOKEN_TO_BE_REPLACED
Return to the top of the page