A new approach to social media called "Tweak the Tweet," conceived of by University of Colorado at Boulder graduate student Kate Starbird and being deployed by members of CU's Project EPIC research group and colleagues around the nation, is helping Haiti relief efforts by providing standardized syntax for Twitter communications.

Through consistent use of specially placed keywords, or "hashtags," in Twitter posts to communicate critical information such as location, status and road conditions, the "Tweak the Tweet" approach makes information computationally easier to extract and collate.

The Sahana Foundation is one organization that is capturing "Tweets" in "Tweak the Tweet" format to populate its Haiti Web portal for relief agencies.

"Project EPIC has done extensive research on the use of Twitter and other social media during disasters," said Starbird, a National Science Foundation graduate fellow who is pursuing her doctorate in technology, media and society in CU's ATLAS program. "A slight change to current Twitter behavior allows the platform to be used as a broad-reaching crisis communication tool for anyone with access."

Starbird conceived of the "Tweak the Tweet" idea with Jeannie Stamberger of Mountain View, Calif., at a national hacker competition in November of 2009.

A group of eight CU-Boulder students and professors worked alongside dozens of colleagues nationwide to develop and diffuse the syntax across the Twitter community immediately following the Haiti earthquake. The group members have tweaked hundreds of help messages on Twitter into the standardized syntax to fuel adoption by others and have built a bilingual instructional Web site.

Starbird said the project has been a way for computer scientists, who would otherwise feel helpless, to contribute to relief efforts. Similarly, groups across the country formed "crisis camps" the weekend following the Haiti earthquake to brainstorm technological needs.

"We hope this way of tweeting' gets additional traction for the Haiti response and relief activities, which will ensue for some time," said Leysia Palen, assistant professor of computer science and director of the NSF-funded Project EPIC: Empowering the Public with Information in Crisis. "We are appealing to the public for help but we also set our sights on getting the technological and humanitarian communities primed for future disaster events."

Starbird, Palen and their colleagues encourage anyone who is interested to help by spreading the word on the Twitter syntax by "retweeting" a link to the instructional Web site. Users may also search for regular "Tweets" asking for Haiti-related help and convert the messages into the syntax.

To learn more about helping Haiti through "Tweak the Tweet" visit epic.cs.colorado.edu/helping_haiti_tweak_the_twe.html and follow the effort on Twitter at www.twitter.com/epiccolorado . To view the Sahana Foundation Web portal visit haiti.sahanafoundation.org/prod/ . 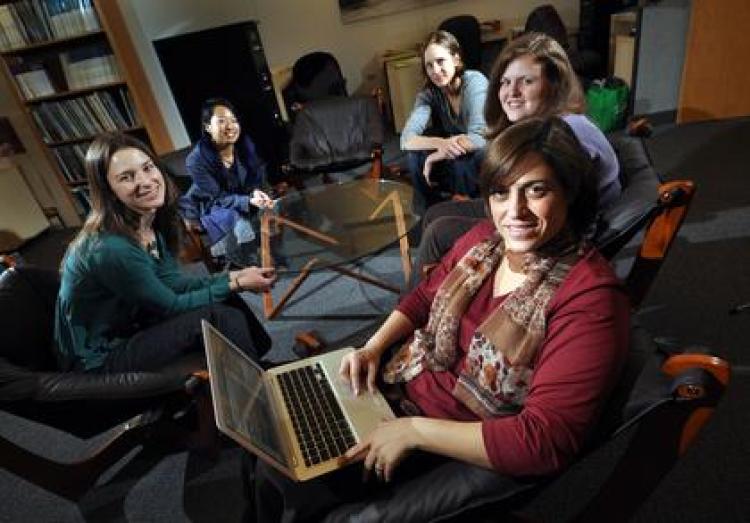 From left to right are CU-Boulder graduate students Sarah Vieweg, Sophia Liu, Kate Starbird and Amanda Hughes. In the foreground on the right is Leysia Palen, assistant professor of computer science and director of the National Science Foundation-funded Project EPIC: Empowering the Public with Information in Crisis. Photo by Glenn Asakawa/University of Colorado

A collaborative study, including CU Boulder associate professor Andrew McAdam, investigates how the risks and rewards of red squirrel reproduction are a microcosm of evolutionary patterns. END_OF_DOCUMENT_TOKEN_TO_BE_REPLACED

What happens when an expert on natural language processing asks a chatbot to write a children's book in the style of Dr. Seuss? Professor Kai Larsen put the question to the test. END_OF_DOCUMENT_TOKEN_TO_BE_REPLACED

A model of your very own kidney made entirely from soft and pliable polymers? Researchers at two CU campuses are on the cusp of 3D printing realistic replicas of human anatomy. END_OF_DOCUMENT_TOKEN_TO_BE_REPLACED
Return to the top of the page