When the call came, Liz Harris didn't hesitate to answer in the affirmative: Spend part of the holiday season in Iraq and Kuwait helping to entertain U.S. troops?

Her lone question: When do we leave?

Harris, the University of Colorado's spirit coordinator  she coaches the school dance team, the CU Express, and oversees Chip (mascot) and the cheerleading squads  left on Dec. 27 and returned Jan. 3 on a mission of holiday gratitude sponsored by the USO and Tostitos.

Accompanying Harris on the trip were CU cheerleaders Lorraine Aceron, a junior from the Phillipines; Nicole Erpelding, a sophomore from Littleton; Lisa Fikany, a freshman from Castle Rock; and Kaitlin Nonko, a senior from Colorado Springs.

Colorado was picked in part because of Harris' quick reply to an e-mail asking for volunteer's. Tostitos' marketing agency, The Marketing Arm, reached out to Harris and countless others and Harris replied with a simple "very interested." The marketing agency said Harris was the first to respond, thus they moved forward with taking CU cheerleaders.

A taped segment that included the CU contingent was scheduled to be aired at halftime of Monday night's Tostitos Fiesta Bowl, matching TCU and Boise State.

Harris and the Buffs quartet were among a group that included former college coaches Barry Switzer (Oklahoma) and Tommy Bowden (Clemson) and a contingent of ex-players that included Tommie Frazier, Brian Bosworth, Bruce Smith, Tee Martin, Joe Washington and Tony Casillas, among others.

On New Year's Day in Baghdad, the former players were scattered among selected soldiers on a pair of teams  Team Liberty, coached by Bowden, and Team Freedom, coached by Switzer  that played in an environment that Harris said featured most of the trappings of home.

"Incredible . . . in a way, it felt like a real college football game," noted Harris, who attended CU from 2000-02 and now is a Broncos cheerleader. "There was band there, cheerleaders, fans . . . we threw out jerseys to them, flags.

Prior to the New Year's Day game, the CU group stayed busy, visiting three of six U.S. bases in Kuwait on Tuesday, then left for Iraq early Wednesday on a leg of the trip heavy with security.

"We were told not to get to specific and don't Twitter, don't text, don't email, don't use Facebook  and don't tell people where you are," said Harris, a native Nebraskan who graduated high school in Fort Morgan.

Once in Baghdad, the group was headquartered at one of the late Saddam Hussein's former palaces. Harris called the accommodations "insane"  a term of endearment in this case.

After a New Year's Eve pep rally, a couple of rocket attacks helped usher in 2010. Sirens sounded and blared "Incoming," which was warning enough for non-military personnel to follow the soldiers' lead.

"Everyone hit the floor . . . . we weren't really briefed on what you do if  because nothing had happened for so long," Harris said, noting the group heard only muffled explosions that were some distance away.

"We had tons of soldiers coming up to us asking if we were OK," she said. "We said, Since you guys are laughing, it's not that big a deal.'

"Then one of the soldiers said, We laugh on the outside, not on the inside. That's our coping mechanism."

Not long after the first warning, though, the sirens sounded again, underscoring to Harris and the others that "this is a war zone . . . this is what these guys deal with on a daily basis. I could hear three more (rocket) hits in a row."

The selection of the CU contingent, said Harris, began with junior/senior cheerleaders who had a valid passport and whose parents would approve the trip. Volunteers were scarce.

Said Harris: "This was a scary thing; we were going into a war zone. Some kids weren't interested in going. Some who were seniors just said, No thanks.' It narrowed down pretty fast."

But any risk was trumped many times over by the reward.

At the conclusion of the New Year's Day flag football game, Harris was moved by one soldier's reaction: "I had a guy come up to me and say, Thank you so much for being here. I'm looking around this whole place and I've never seen this many soldiers smile for this long a time.

Look at how happy they are . . . this takes them into a normal at-home environment. They don't have to feel threatened and they're at war.'"

Harris was taken aback by the number of soldiers who thanked her for making "such a sacrifice" in being away from home and family during the holidays.

"I didn't feel like I was sacrificing anything," she said. "To me, this was a gift; I was blessed to have the opportunity to go over there and do this.

"It was the opportunity of a lifetime to be able to do this . . . I feel lucky. It was something that will be with me forever." 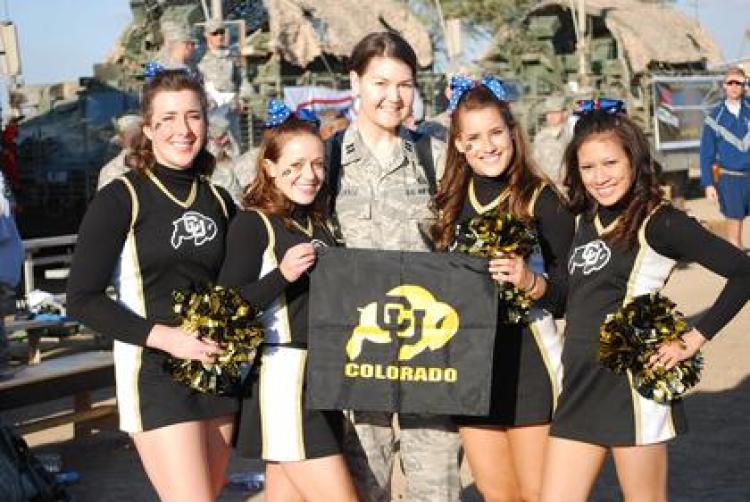 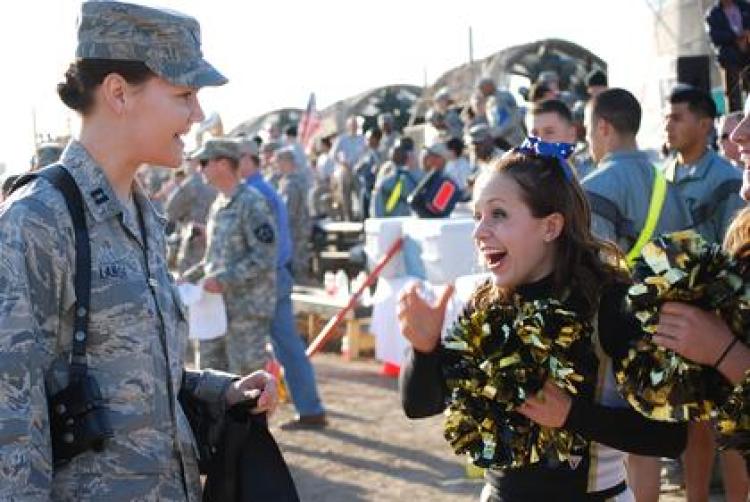