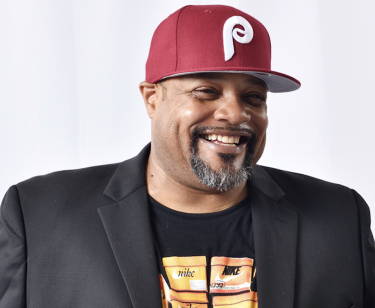 Lorenzo (Rennie) Harris, Artistic Director and Choreographer, celebrates hip-hop culture on his own terms by using some of the world’s most influential forms of movement, music, and storytelling to revolutionize contemporary concert dance. Born and raised in North Philadelphia, Harris has been teaching workshops and classes at universities around the country and is a powerful spokesperson for the significance of “street” origins in any dance style. The mark of Harris’ career began as a performer and choreographer through performing for crowds at clubs, parties and within his community with his first company, the Scanner Boys in the 1980s (a hip hop performance group of which Harris was a founding member). According to Harris, he didn’t become a part of the “legitimate” dance community until 1992, when he was invited to participate in the Susan Hess Choreographer’s Project.

In 1992 Harris founded Rennie Harris Puremovement, a hip-hop dance company dedicated to preserving and disseminating hip-hop culture through workshops, classes, hip-hop history lecture demonstrations, long term residencies, mentoring programs and public performances. Harris founded his company based on the belief that hip hop is the most important original expression of a new generation. With its roots in the inner-city African-American and Latino communities, hip hop can be characterized as a contemporary indigenous form, one that expresses universal themes that extend beyond racial, religious, and economic boundaries, and one that (because of its pan-racial and transnational popularity) can help bridge these divisions.

Harris’ work encompasses the diverse and rich African-American traditions of the past, while simultaneously presenting the voice of a new generation through its ever-evolving interpretations of dance. Harris is committed to providing audiences with a sincere view of the essence and spirit of hip hop rather than the commercially exploited stereotypes portrayed by the media. As Harris develops as a choreographer, he continues to profoundly influence the field of contemporary dance.

Harris shows us the integral connections between body movements through the philosophy inherent in the company’s name, “Puremovement of mind, body, and soul.” Since establishing the company 15 years ago, Rennie Harris has continually demonstrated his outstanding talent for utilizing his distinctive and compelling contributions to dance vocabulary based on his personal choreographic vision. At the age of 43 Mr. Harris is at the top of the hip hop heap.