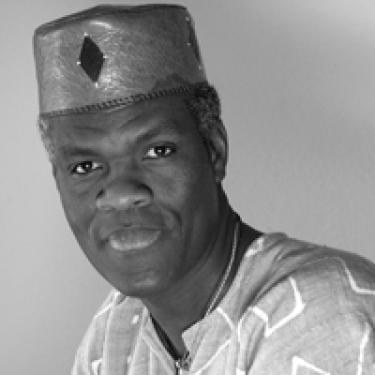 Nii Armah Sowah is a Ghanaian-born arts educator. He graduated from the University of Ghana’s School of Performing Arts in 1987 with a major in dance. After graduating from the African Center for the Training of Performing Artists in Bulawayo, Zimbabwe in 1991, he obtained a Master of Arts in Expressive Arts Therapies at Lesley University in Cambridge, Massachusetts in 1997. Over the years, Nii Armah has worked professionally as a dancer, choreographer, singer, actor (television, film, and stage), public speaker, massage therapist, and expressive arts therapist. He was the principal dance instructor and choreographer at the School of Performing Arts, University of Ghana, between 1987 and 1994. During this time he toured extensively across Africa, Europe, Canada, and the U.S. He has conducted residencies and taught master classes at several institutions including University of California at Irvine, New England Conservatory of Music in Boston, MA, Metro State University in Denver, CO, Lesley College in Cambridge, MA, Market Theater Laboratory, Johannesburg, South Africa, TaSuBa, Tanzania, National Theaters of Ghana, Ethiopia and Kenya.

Nii Armah passionately believes that dance is a human right, and therefore facilitates experiences that make dancing accessible for everyone – emotionally, physically and spiritually. His commissions have included keynote presentations and workshop facilitation for conferences and retreats. His clientele includes colleges, dance companies, K-12 schools, civic groups, and organizations across the U.S., Canada, Africa, Europe, and the Caribbean. Nii Armah was the recipient of the 2008 “Excellence in Teaching Award” at the University of Colorado Boulder, where he teaches courses in African Dance and Introduction to Dance and Culture.