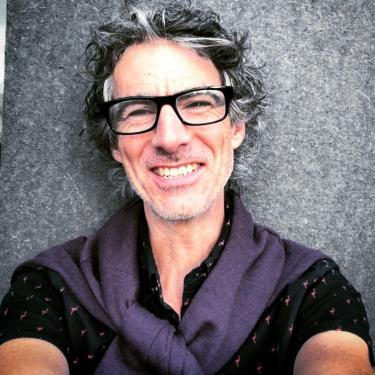 Jesse Manno was born into a performing arts family in New York City in 1966 and grew up there and in Fort Collins, Colorado. He began improvising, composing and performing music professionally in 1982 and has since fulfilled over 200 commissions for original scores, including over 30 evening length works.  In order of frequency, these have come from modern/post-modern dance, theatre, film/video, circus arts, special event, and purely musical interests.

He sings in Greek, Turkish, Arabic and French and plays a variety of lutes, flutes, keyboard and percussion instruments, sometimes 2 or 3 at once (a skill developed while playing for modern dance classes).  30+ years of composing/improvising in support of others' creative visions has fostered a broad stylistic range -from electronica and musique concrete to minimalism and neo-romanticism. He is a founding member of the Balkan/Middle Eastern Music Ensemble SHEREFE, featured at festivals, weddings, conferences, and special events in the rocky mountain region and beyond.

Jesse received musical training and a BA in Asian studies from the University of Colorado Boulder and continues to study sporadically. He taught composition in the music department at Naropa University, and has taught many workshops and master classes at many other Universities and Arts organizations. He has been an Artist in Residence at the Bates Dance Festival annually since 1998, and has served part time as Music Director of the CU Boulder Dance Program since 1991. There he accompanies dance technique classes, supervises musicians, and teaches music courses for dancers.