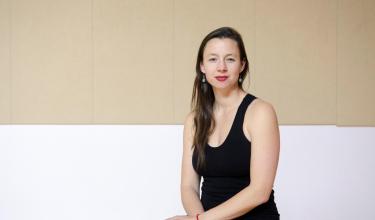 MFA in Choreography, The Ohio State University; BA in Dance, University of Washington, Associate Professor, CU faculty member since 2007. Professor of Dance, Associate Dean for Student Success for the College of Arts & Sciences.

Erika is a dancer who makes dances, films, theatre, stories, and shadow boxes. She likes to hide things in the work so that folks can choose their level of engagement—do a surface read of the work’s formalism, high production values, virtuosic dance moves; or peek up under its skirt where she hides the good stuff, just there under those triple turns and leg kicks.

Her works for high schools and colleges across the country have been feminist acts of reclamation, ruminations on the benefits of leaving flawed systems: institutions, dance companies, relationships. She is thrilled to share her “failures” with next generation trouble-makers. And to keep learning from those failures and students as they show her her gaps. She is now, more than ever, making from and within these gaps.

Interlochen and “Jail Yard” trained, Erika was taught to believe in pedigree and thought that one had only “made it” if they danced with the Graham Company or Mark Morris. She did some stints in those neighborhoods and found that while the “fancy” helped with subway platform dancer speak (and the further institutionalization of white privilege), she is most herself when building community, dancing in class, and making her own way.

Some stats: The Columbus Movement Movement (cm2), the organization Erika formed in 2004 to support contemporary dance in Columbus, OH, was named one of Dance Magazine’s “Top 25 to Watch” in 2007.  Erika’s choreography has been seen in four countries and in 12 states over the last eight years and her award-winning screendance works continue to screen internationally. She has danced with Buglisi/Foreman dance, The Mark Morris dance Group (as a supplementary dancer), and with folks like Teena Marie Custer, Megan Odom, Anna Sapozhnikov, Sara Hook, Sydney Skybetter, and Michelle Ellsworth. Erika was part of the summer faculty at the Interlochen Arts Camp for 8 years and has been a frequent guest artist at the Interlochen Arts Academy.