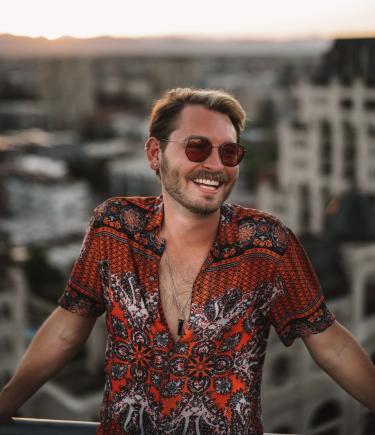 Ben (pronoun: bev) is a second-year graduate student at CU Boulder. Ben's research is centered around queer theory, eco-criticism and performance studies. How can theatre act as a space for ethical action on queer and climate justice?

Ben served as the Artistic Director for the opening fall show The Climate Cabaret--an evening of short plays about the climate crisis. We partnered with Climate Change Theatre Action out of New York City to bring this project to life.

Ben worked with bev's advisor, Dr. Beth Osnes, this summer on an interspecies arts/science partnership between humans and barn swallows. They were led by a group of courageous youth which culminated in a film and public performance titled Side by Side.

Ben was a recipient of the Hazel Barnes Flat which brought bev to London, UK in November. While there, Ben led workshops on climate comedy with a local arts/science organization, Your Canal Boat CIC.

Ben served as the Artistic Director for the 6th Annual New Plays Festival at CU Boulder in Spring 2021.

Ben will be part of a public showing of bev's artistic practice at the Denver Art Museum in January 2022.

Ben is filled with more questions than answers these days...which feels just about right for grad school.