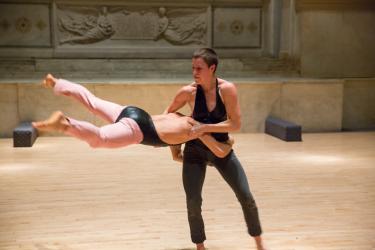 I am a dancer, maker, teacher, activist, and collaborator. I believe in dancing with the body I have as the person I am in order to cultivate radical aliveness. Originally from Alaska, I work nationally and internationally within the contexts of Contact Improvisation, improvisation, experimental contemporary dance, and social somatics/Feldenkrais®. Through queer, feminist, and anti-racist perspectives my research centers on activating new/old ecologies of moving, making, being, and relating in intersectional ways. Current research interests include deprioritizing in order to allow the conditions to reveal the priority, wildness, making/being a mess, and gentleness.

Recent projects include being a Global Practice Sharing Artist in Budapest, Hungary through Movement Research, teaching the intensive at the first Guatemala Contact Improvisation Festival and performing my evening length solo The Gentleness Project: Beast Mode at the Palacio Nacional in Guatemala City, Guatemala, performing Echo at DOCK 11 in Berlin, Germany with Sara Shelton Mann, and co-directing an intergenerational dance film with Rebecca Salzer which premiered at Screen Dance Festival Stockholm Sweden, among other endeavors.

Before joining the Department of Theatre & Dance at CU Boulder, I had the honor of teaching for nine years in Dance Studies at California State University San Marcos. In San Diego, alongside Karen Schaffman and Eric Geiger, I co-directed the non-profit experimental dance presenting organization PADL West for five years. I am committed to supporting and producing social justice oriented experimental dance wherever I live. Through all facets of my work I practice radical independence and responsible citizenship. I believe that we are the material of the work.