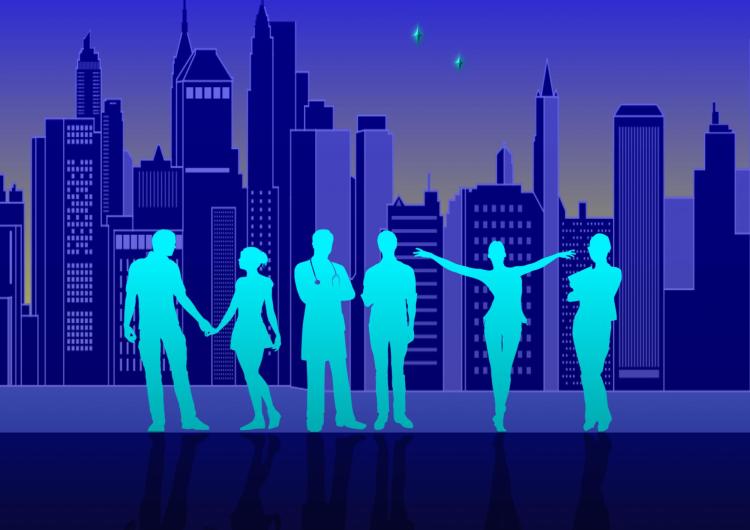 Exploring how hope is born from tragedy, “Unspoken” follows three couples and delves into the ways unexpected events alter all of their lives. Several characters are based on the real-life friends of Crowe, who grew up on Long Island and lived in New York City for many years.

“[‘Unspoken’ is] about choosing love over fear,” Crowe says. “I want people to leave the play feeling that they should hold tighter to the people they love. All of the plays I admire most are ultimately about appreciating the moment and appreciating those who are with you during your brief time on Earth.”

When the play begins, and when tragedy hits, many of its characters are fearful. Candace, an attorney, suddenly learns she’s pregnant with twins and wonders whether her husband, Oscar, can grow up, let go of the past and be there for his family. Kyle, a classical pianist, steps away from his instrument in the hopes of reconnecting with his partner, Bryan. Daniela, a choreographer, is preparing for the opening of a new work when disaster strikes and she begins to question her own values.

“There’s a timeless quality to the script,” says Lindsay Weitkamp, who played Candace in a staged reading of the play last year. “It’s part of the human condition to wrestle with feelings of love, feelings of fear—to wrestle with that duality is common at some point in everyone’s life. And when you realize that you’ve made it through with the comfort of companions around you—you see that those people are the roots that give us hope.”

Crowe says the play is as philosophical as it is emotional—in fact, it was inspired by Jean-Paul Sartre’s essay “Being and Nothingness,” a hallmark of existential thought. Despite that, Crowe says, audiences need no prior knowledge of existentialism to understand the play’s themes.

“When people think about existential philosophy, they think it’s very removed from real life, that it’s the idea of questioning meaning,” he says. “But in many ways, it comes down to this idea of really letting go of fear and creating your own reality. We create our own meanings through the decisions we make and through the courage we need to to survive in this irrational universe.”

It’s something to keep in mind for today’s political times, says Stephanie Prugh, who directed the staged reading last year. No matter where you stand, it’s best to unite and lobby for what you believe in.

“I think there’s a beauty and a need for a story like this that shows us that we are not alone as we wrestle with our demons,” Pugh says. “We all feel intense fear and intense love, but we can choose which of those to focus on. We can either fight for something or stand by and allow things we don’t want to happen—it’s up to us.”