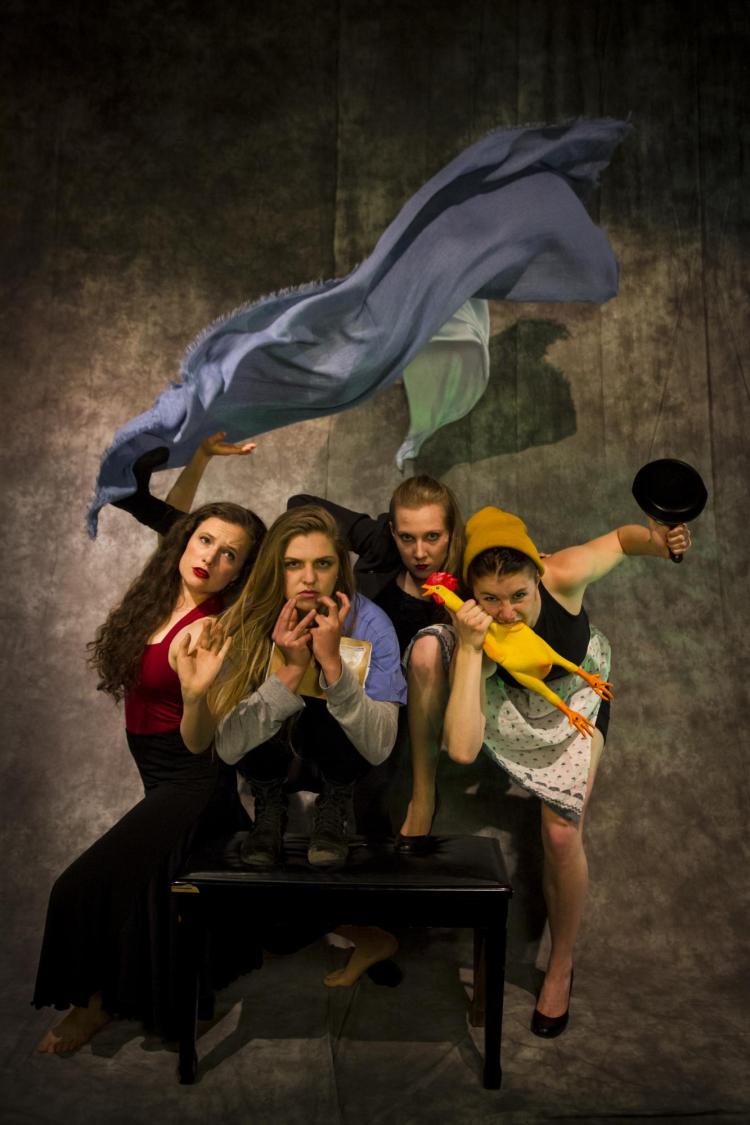 Dance pieces tackling both timeless and timely themes will be on display in “Catapult,” a showcase of brand new works choreographed by graduating CU Boulder students. The show runs Feb. 10-12 in CU’s Charlotte York Irey Theatre.

In “Catapult,” four burgeoning artists set to earn BFA degrees this spring will use inventive choreography to examine everything from anxiety in modern times to the negative impact of processed food to the male gaze in Renaissance art.

“I definitely think our times, politically, are getting very messy and very interesting,” says Heather Woolley, one of the show’s choreographers. “Using dance as a way to research contemporary issues is important to the arts and what they stand for.”

In Woolley’s piece, dancers are dressed as animals who have adapted to 21st-century American life in different ways. A garden slug has coated itself in processed food to ward off predators, but it’s taken a toll on her survival. Three hens have begun to resist a rooster’s patriarchal egg-laying mandates, but they can’t bear to break from some of their domestic routines.

Woolley says she wanted to use animals instead of people in order to “confront some of the tricky conversations we don’t like to have” in a more accessible way.

Ellen Reynerson, too, is interested in contemporary issues—namely the toll anxiety takes on many of us. Half of the dancers in her piece are regular people, while the other half are dressed in dark, sleek clothing to represent the black cloud of anxiety hanging over us.

“The piece is about how anxiety can manipulate you and blur your perception of what’s real and what isn’t,” Reynerson, a Boulder native, says. “What’s interesting about anxiety is, it exists to keep you safe, and it’s not always a bad thing to have. It has good intentions, but sometimes it’s overpowering and can hold you back.”

Reynerson says she hopes audiences come away thinking about their anxiety “like a personal relationship. If you can choose to say ‘no’ or acknowledge that it’s there, you can begin to work through things and prevent it from manipulating you.”

Emma Scholz, another BFA student, also hopes her piece inspires audiences to use more personal agency—specifically when they’re taking in a piece of art.

“I want them to read the little descriptions of the paintings they see in museums—to be curious about the things around them rather than just being passive observers,” she says. “That way, they learn about it and can question it for themselves.”

The dance and art history double major has always been interested in the intersections between history and movement. In her piece, dancers pose as the subjects of classic Titian paintings and slowly discover they can move around freely, first moving their fingers and then their whole bodies.

“When a body is in motion, it no longer belongs to one person, such as the person painting it,” she says. “There’s a new level of agency, because they’re not just placed in a certain position. They have this capacity to break away from the expectations put upon them.”

“I’ve found that a lot of my professors are intent on creating good humans,” she says. “They’re not interested in winning trophies. They’re interested in creating the humans who are going to make the biggest change.