Home Research Pollinators and the evolution of floral diversity

Pollinators and the evolution of floral diversity 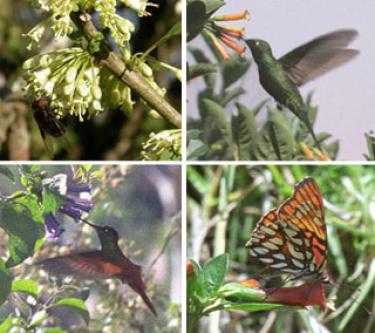 Interactions with pollinators are thought to be one of the main selective forces underlying the origin of floral diversity. Species of Iochrominae are pollinated by a wide range of animals, including hummingbirds, bees and butterflies. Insect-pollinated species, including Acnistus arborescens, tend to have small nectar rewards and scented flowers while the species that are principally pollinated by hummingbirds tend to have highly rewarding unscented flowers and large displays. Multiple species within Iochrominae can be found living in sympatry and sharing the same pollinator species. However, pollinators often display individual fidelity to particular species, i.e., they do not appear to forage randomly in mixed patches. Our recent work suggests that competive interactions among co-flowering iochromas explains the tremendous diversity of flower color, which may serve as a signal to allow pollinators to discriminate among species (Muchhala et al. 2014).

Previous support for this work from NSF DEB 0309310