Evolution of the anthocyanin pathway 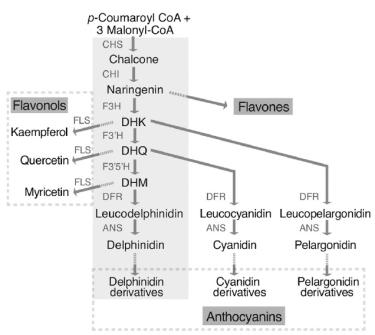 Anthocyanins are the most common class of floral pigments. They are responsible for most of the blue, purple, pink, and red colors we see in flowering plants. The basic structure of flavonoid pathway that produces anthocyanins is deeply conserved across all flowering plants, yet flower pigmentation is tremendously evolutionarily labile. One explanation for this paradox is that differences in pigmentation across species can arise through changes in gene expression, and indeed, regulatory differences have been implicated in many flower color transitions (e.g., Smith and Rausher, 2011). However, we have found that coding sequence mutations in structural genes (enzymes) can also contribute to the evolution of new flower colors (Smith et al. 2013).  By examining the evolution of pathway genes (both regulatory and structural) and their expression patterns across species, we aim to gain a general understanding of how changes in pathway function lead to color differences on a broad phylogenetic scale.