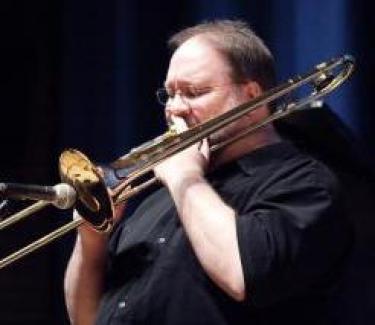 Paul McKee, newly appointed Associate Professor of Jazz Trombone and Arranging/Composition at the University of Colorado at Boulder, received a BME from the University of Northern Iowa and an MM in Composition from the University of Texas at Austin. In 1984 he joined Woody Herman’s Thundering Herd and appeared on several Grammy-nominated recordings. Over the years Paul has served on the jazz faculty at schools including DePaul University, Youngstown State University, Northern Illinois University, the University of Missouri at Kansas City and Florida State University. Paul maintains a busy schedule as a clinician and guest artist, and his arrangements and compositions have been performed and recorded by professional and academic jazz ensembles worldwide.  His recording Gallery was released to critical acclaim and features performances by Carl Fontana, Bobby Shew, Tim Ries and Ron Stout. Paul recently appeared on the recording Back When It Was Fun with 7 on 7, a group comprised of musician/educators from colleges across the nation. Additional recent recordings include big band projects by Dan Gailey (University of Kansas) and Steve Owen (University of Oregon). Paul is a clinician for the Conn-Selmer company and plays King trombones exclusively.