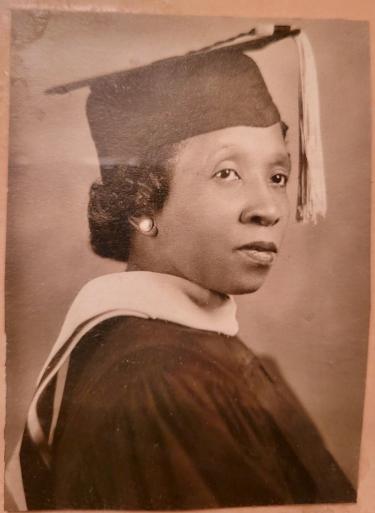 Jacqueline Wisner has a pretty good idea how her grandmother would react if she were alive to learn that the CU Boulder College of Music has named a new Diversity, Equity and Inclusion scholarship fund after the pioneering matriarch.

“She would be over the moon,” Jacqueline says. “She took great pride in family accomplishments—so she would certainly make sure that the community heard about this.”

The parents of lifelong activist and music teacher Genevieve McVey Wisner were among the first African Americans to settle in Boulder in 1897. Patriarch John Wesley McVey owned the Iowa Barbershop and Billiard Parlor at 1530 Pearl St., and his family was considered both prominent and well-off for the time. He and his wife Emma McVey, charter members of the Allen Chapel of the African Methodist Episcopal Church, raised seven children in a home founded on Christian beliefs, and infused with music and a deep commitment to justice, equality and education; her father was very specific about the need to achieve and to work toward bettering the stance of the local Black community. Due to their staunch activism, the family home at what is now 1718 Canyon Blvd. is recognized as an historic landmark.

Those were challenging times for Black families living in Boulder. In a 1993 essay titled “History: African Americans in Boulder,” CU graduate and music educator Anthony Ray wrote that Genevieve was refused permission to give her senior choral recital on the CU campus because of her race. “So she gave it at the First Methodist Church on 14th Street,” Ray wrote, “[and] did she ever sing!”

Genevieve—4 feet 11 inches in height but 10 feet tall in stature—was a member of CU’s Alpha Kappa Alpha, one of the oldest Black sororities in the country, and she held a lifelong membership in the National Council of Negro Women, working with founder Mary McLeod Bethune and civil-rights leader Dorothy Height on ending the lynching of Black people, restructuring the criminal justice system and other critical causes.

“Some might say she was a social butterfly, others might say dynamic,” says Jacqueline, reflecting on Genevieve’s numerous sorority and club events, and social gatherings. “My grandmother’s love of music was in her DNA. She believed that music was a way of connecting with others and touching the souls of people.”

Genevieve was born in 1902, the third of seven siblings. Gladys, Hazel, Genevieve, Kenneth, George, Helen and Ralph all became an integral part of Boulder’s early community of Black musicians, except Gladys who died at an early age. Kenny “Sticks” McVey eventually became a bandleader who toured the country with his own all-Black orchestra.

Genevieve married Rev. Dr. Roscoe W. Wisner Sr. in 1922, began teaching music and started a family that grew to include three sons. Twenty-two years after earning her first degree, Genevieve presented her master’s thesis, “A Comparative Study of the Quality of Teachers of Music in Negro and White Colleges.” In it, she concluded that “Standards in Negro colleges compare favorably with those of white colleges and that both groups recognize the important place music has in the development of young people in America.”

Her work was no doubt informed by the large number of Black master’s candidates enrolled at the University of Colorado at the time. Because Black teachers in the South could not enroll in white universities for advanced degrees until 1948, teaching candidates came to Boulder by the dozens. And when they graduated, ironically, “they had to go South to get employment,” Ray wrote in his essay.

Degrees in hand and her marriage dissolved, Genevieve moved east with her sons to become a music professor and choir director at Delaware State College in Wilmington. She eventually retired as the music supervisor at Morgan State University, another historically Black college in Baltimore.

In her memoir “Blessed Are the Meek, the Humble, and the Bold,” author Elsie M. Collins recalls being taught piano by Genevieve at Delaware State, writing that Genevieve “was quite civic-minded and held membership in several organizations that promoted the well-being of people, especially the African American population.” Collins wrote that her professor forever changed her path when she was taken with her to attend a conference of the National Council of Negro Women in Washington.

After her retirement, Genevieve lived at her home in Baltimore, gave private music lessons and continued as choir director at her church. Eventually, illness required her to be cared for by her son Roscoe Jr. and daughter-in-law in Roosevelt, New York. She quietly departed from this world at age 88 having left the legacy of her love for all music genres to her sons and their families.

“Music was such a prominent part of my life growing up,” Jacqueline says. “I can’t recall a time that we gathered together and eventually someone wasn’t playing the piano, violin, trumpet or singing. From an early age, my grandmother would work with me playing piano and violin, and she would help me compose my pieces. Because of her, the musical score of our lives ranged from spirituals to classics, opera to choral arrangements, and R&B to jazz.”

Jacqueline especially enjoyed watching her diminutive grandmother play the mighty pipe organ at concerts. “It always fascinated and amused me to watch her as she would go up and down all the levels. You would not believe all the music coming out of this little lady.

“She was determined, feisty, confident … and soft as butter when it came to her grandchildren.”

Jacqueline appreciates the significance of the college’s decision to immortalize her grandmother’s name now, 32 years after her death in 1990. The Genevieve McVey Wisner Memorial Scholarship Fund will provide undergraduate and graduate scholarship awards for underrepresented music students in Genevieve’s memory. It was Professor Emeritus Tom Riis whose research came up with the idea to name the endowment in Genevieve’s honor.

“This is a rare acknowledgement and progressive move on the part of the school to take this step, especially these days when more and more inspiring stories are being brought to light about the struggles of the Black community for racial justice over the decades,” Jacqueline says. “I think she would say that it is an action that is worthy of notice—not just for her, but as an example of the many unnamed people who have surmounted crushing obstacles to reach their goals. This is a laudable action on the part of the school that honors students past, present and future.”

And all the more meaningful to Jacqueline because it will benefit music students of color. “I was fortunate to have this vibrant, talented, loving woman as my grandmother,” she says. “And now, through this scholarship, others will be blessed by her light as well.

“Music can transcend generations, unite us, tap into our emotions, and elicit and cement our memories. When music is shared, it’s a gift to all humanity.”

Olivia Huizar Conner shares how her background inspires her to promote Diversity, Equity and Inclusion (DEI) in music. END_OF_DOCUMENT_TOKEN_TO_BE_REPLACED

Alumna Annie Booth shares how the College of Music continues to impact her career as an award-winning jazz pianist, band leader, composer/arranger and educator—and offers valuable career advice. END_OF_DOCUMENT_TOKEN_TO_BE_REPLACED
Return to the top of the page