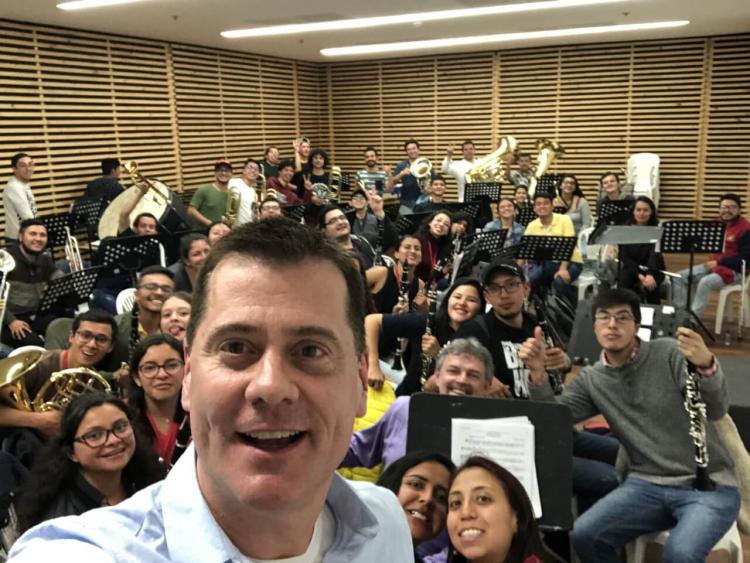 “My time at CU Boulder was so important in shaping the direction I’ve taken in my career,” says Tom Verrier (DMA ’98), associate professor and director of wind studies at Vanderbilt University’s Blair School of Music. “The vibe of the whole university and my work with various faculty—Allan McMurray, in particular—put what I do in a grander context. I do my best to convey that spirit to my students, too.”

“Through music, we share in the human experience,” continues Verrier, whose teaching duties include undergraduate and graduate-level courses in conducting, pedagogy and education. “A year before I applied for the doctoral program, I did a conducting symposium at CU Boulder. At one point, all the conductors went to the mountains—and I recall an overlook and this incredibly grand view of nature.

“To this day, and throughout the last 22 years, that broader view has inspired the types of activities and projects I pursue, as well as my approach to music-making … which hopefully inspires my students, too. Those seeds were planted at CU Boulder.”

Verrier went on to serve as a clinician for Yamaha Music Latin America, taking on the role of program director of the Sistema Nacional de Educación Musical Instituto de Desarrollo Musical, a collaborative project of the Blair School of Music and the Ministry of Culture of Costa Rica.

“At Vanderbilt, I’ve been really fortunate to have a platform for creativity,” he says, citing the encouragement of concert pianist Mark Wait—dean emeritus and professor of music emeritus at the Blair School of Music, formerly on the CU Boulder College of Music faculty—as key to his career at Vanderbilt. “Mark really empowered his faculty to look for broader connections and purpose in why and how we make music.

“For me, I’ve always felt a connection among method acting, music and being a conductor.”

So for three semesters, Verrier took acting classes in New York, flying there every other Tuesday to study John Strasberg’s method, which requires actors to go beyond emotional memory and use a technique called “substitution” to temporarily become the characters they are portraying. 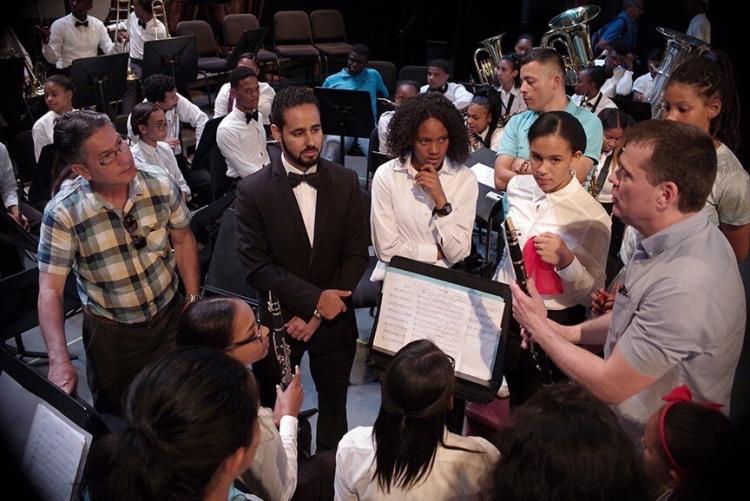 “The main takeaway from my experience of method acting was the importance of developing your sense memory to the point where you’re able to recreate a feeling—the warmth of holding your coffee mug in the morning, the feeling of being cold—so that your presentation is much more real,” says Verrier. “To develop that sense memory, you learn to pay really close attention to detail in everything you experience, which then translates to how you experience a range of musical styles.

“Since then, I’ve had so many wonderful opportunities to continue to find new contexts—the bigger ‘why’—for music-making, and to share those opportunities and connections with my students. Band music is an incredible vehicle for that.”

Fluent in Spanish, Verrier has accepted invitations to conduct throughout the Americas, Asia and Europe. He has presented and/or conducted performances at conferences of the Congreso Iberoamericano de Directores, Compositores, Arregladores e Instrumentistas de Bandas Sinfónicas (Tenerife, Canary Islands), the Asian Pacific Band Directors Association (Macau and Hong Kong), the Hong Kong International Band Fair, and the Midwest Band and Orchestra Clinic in Chicago. He’s also a member of the American Bandmasters Association and serves on the executive board of the College Band Directors National Association.

“Learning about each other’s cultures and playing each other’s music creates understanding across boundaries,” notes Verrier. “Globally, we get to know each other better through music.

“Music is this wonderful expression of different worlds, reflecting unique insights into distinct cultures, and building bridges among people that lead to positive social interactions and shared cultural activities.”

Currently a self-described “Zoom expert,” Verrier is a strong believer in human-to-human connections. “I hope this time of social distancing is giving us all a real appreciation for coming together in shared group activities. When this time has passed and we’re able to make music together again, I believe we’ll come back with a splash—and that there will be an incredible resurgence of group art.”

Ensembles under Verrier’s direction have been selected to perform for the International Society for Music Education (Tenerife, Canary Islands), the National Association for Music Education (NAfME) National In-Service Conference (Nashville), the North American Saxophone Alliance (Los Angeles), southern and western division conferences of the College Band Directors National Association (CBDNA), as well as the CBDNA National Conference in 2015. Furthermore, Verrier has guest conducted the United States Army Field Band, as well as professional ensembles in Argentina, Brazil, Peru, Costa Rica, China and Spain. He also served as consultor artístico with the Dirección General de Bandas of Costa Rica and he is the artistic advisor of the Hong Kong Wind Ensemble.

Curiosity drives Lydia Wagenknecht, a PhD candidate in ethnomusicology and recent recipient of a Fulbright Research Award. “I care that my research will help us understand something in a more broad-based way that we didn’t understand before,” she says. END_OF_DOCUMENT_TOKEN_TO_BE_REPLACED

We’re so excited to welcome alumnus Damani Phillips back to campus this week and to present him the College of Music’s 2022 Distinguished Alumnus Award at our commencement ceremony on May 5! “The versatile training provided by CU has been the cornerstone of my success to date, and has enabled me to do and be many things well beyond typical expectations,” he says. Meet Phillips and discover his powerful advice to graduating Music Buffs. END_OF_DOCUMENT_TOKEN_TO_BE_REPLACED

On May 5, we look forward to welcoming back Judith Glyde, formerly professor of cello and chamber music at the College of Music and chair of our string faculty. Since retiring in 2014 to live in New York City, the professor emerita she has been active with the college’s alumni community there, offering tremendous support to Forever Buffs who are now living and working in the city. END_OF_DOCUMENT_TOKEN_TO_BE_REPLACED
Return to the top of the page