For Larry Stoffel (MM ’90), annual concerts for those incarcerated in state prisons are rooted in mercy, compassion and charity.

“Prison concerts have been an incredible experience for my students,” says Stoffel (left), professor of music and director of bands at California State University, Northridge. “It’s my hope to encourage other university music ensemble directors to undertake such concerts, which are nothing short of life-changing for students and inmates alike.”

Since 2013, the California State University (CSU), Northridge Wind Ensemble has performed at a number of state prisons, primarily the California Institution for Women (CIW), a Level I-III prison for female offenders.

So Stoffel engaged CIW administrators and staff in deciding what programming might be most appropriate to ensure a positive, regular concert experience for CIW inmates—some of whom are well educated with some exposure to music, and some of whom don’t know what a saxophone is. “Planning for CSUN Wind Ensemble concerts at CIW begins months in advance,” he says. “The logistics are considerable, too. A formal security clearance is required for each member of the band and even our concert attire requires approval by the prison warden.

Those efforts paid off. According to Stoffel, the first concert—a holiday program—was a tremendous success. “The following year, returning students assumed ‘that’s just something we do,’” he adds. “Now, six years later, our prison concerts are still understood by students as bringing incalculable value to our prison audiences. And to us, too.” 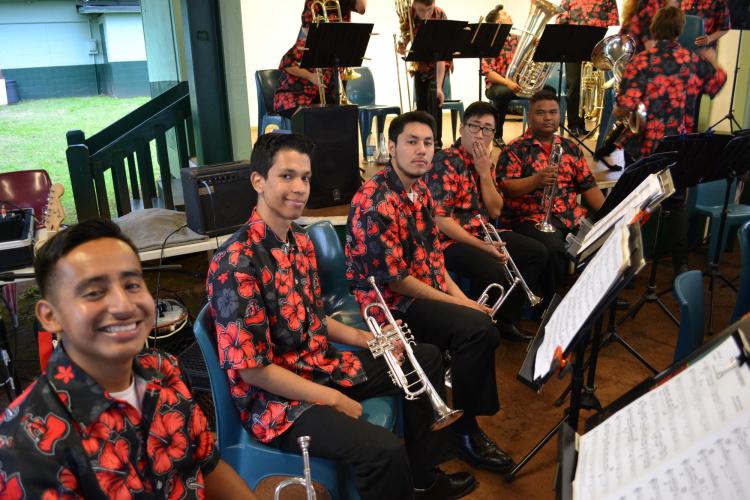 In addition to concertizing, Stoffel and his students also engage in controlled interaction with inmates, many of whom are serving 20- to 25-year sentences—brief conversations that nonetheless pack a punch. “I recall one inmate who had permission to arrive early at the prison auditorium to watch us warm up,” he says. “She came to me and asked if there would be an oboe today. I answered ‘yes, two oboes, in fact.’ She was thrilled, saying she’d played oboe in high school.

“In our first year, another inmate wanted to speak with the students after the concert to express her personal appreciation. She shared with us how her life had changed in an instant—a former professor, one bad night landed her in jail and ended life as she knew it. Somehow, she found solace in our music-making.

“Yet another inmate said she wished the concert had lasted another hour, ‘and it still wouldn’t be long enough.’ And one woman told us she hadn’t heard live music in 40 years.”

Programming recognizable, straight-ahead musical selections across a spectrum of styles—from gospel to sing-along arrangements—Stoffel has been intentional in working with prison staff to best engage this unique audience. Today, having earned the respect and trust of their CIW audience, Stoffel and the CSUN Wind Ensemble are encouraged to also perform pieces more typical of their university concerts.

“We played an entire symphony, likely the first time a four-movement work like that has been performed on CIW prison grounds,” notes Stoffel. “The audience’s response was overwhelming.

“I suspect that many of the women—beyond simply appreciating the opportunity to hear live music—also appreciate that our concerts are presented in a way that’s respectful to their individual dignity. We don’t talk down or dumb down, and we don’t shy away from serious topics in the music we perform.

“After every concert, we receive a short stack of letters that are remarkable to read—some elegant, some crudely written, all of them heartfelt and valuing what we do.”

Thus inspired, Stoffel has also conducted the wind ensemble before male inmates, including incarcerated military vets. He says the response has been similarly—and sometimes overwhelmingly—emotional. “Some inmates are so moved, they can’t fight back tears—and neither can we. Regardless of the justice being served, we see the individual humanity of each inmate.”

Helping to forge the path on which Stoffel finds himself today was Professor of Conducting Emeritus and Distinguished Professor Allan McMurray. “I applied to the CU Boulder College of Music specifically to study under him,” says Stoffel. “As an applicant, I had a certain awareness of Allan. As a student, I discovered even more fully and deeply what it is about Allan that is so inspiring. He helped me discover a holistic approach to conducting, a passion for teaching and an understanding that music—a human creation—is always connected to the human experience, in all its forms and variations.

“Who we are, who we aspire to be and where we may have failed—music communicates what it means to be human.”

Indeed, in this season of giving and beyond, Stoffel and his wind ensemble are undoubtedly making a difference that connects, heals and truly matters.

Curiosity drives Lydia Wagenknecht, a PhD candidate in ethnomusicology and recent recipient of a Fulbright Research Award. “I care that my research will help us understand something in a more broad-based way that we didn’t understand before,” she says. END_OF_DOCUMENT_TOKEN_TO_BE_REPLACED

We’re so excited to welcome alumnus Damani Phillips back to campus this week and to present him the College of Music’s 2022 Distinguished Alumnus Award at our commencement ceremony on May 5! “The versatile training provided by CU has been the cornerstone of my success to date, and has enabled me to do and be many things well beyond typical expectations,” he says. Meet Phillips and discover his powerful advice to graduating Music Buffs. END_OF_DOCUMENT_TOKEN_TO_BE_REPLACED

On May 5, we look forward to welcoming back Judith Glyde, formerly professor of cello and chamber music at the College of Music and chair of our string faculty. Since retiring in 2014 to live in New York City, the professor emerita she has been active with the college’s alumni community there, offering tremendous support to Forever Buffs who are now living and working in the city. END_OF_DOCUMENT_TOKEN_TO_BE_REPLACED
Return to the top of the page