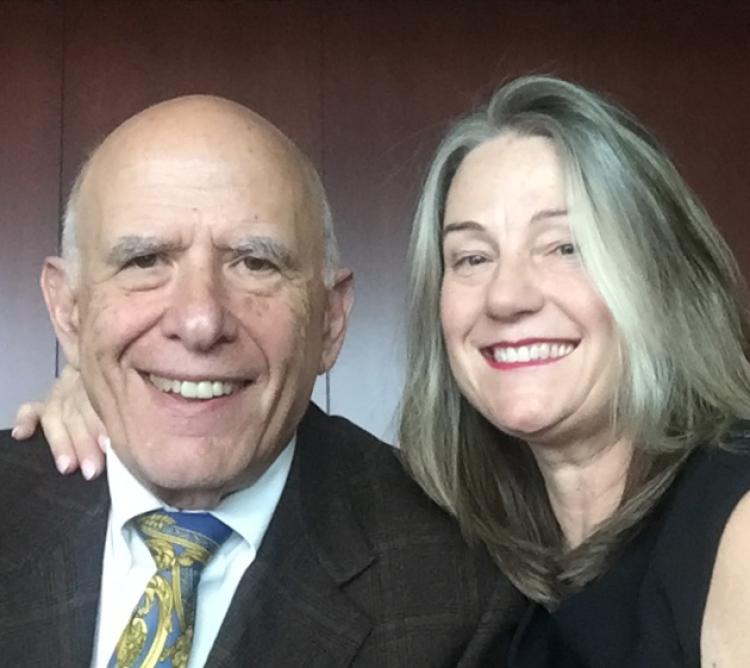 If the College of Music community and Boulder music insiders know one thing about Grace and Gordon Gamm, it’s that they’re always game for an impromptu piano-side singalong.

“Because I got into music early, I always enjoy listening to music. It’s a very uplifting part of my life. I feel lucky,” says Gordon.

The philanthropists—ardent supporters of a number of causes in the Boulder area—hold music in especially high esteem. Grace is a member of the College of Music Advisory Board, two renovated spaces at the Dairy Center for the Arts bear their names, and they’re involved with the Boulder Philharmonic and Colorado Music Festival.

In the past year, they’ve also joined the ranks of the generous College of Music supporters who pitched in to name the new facilities opening soon at Imig Music Building: Starting in fall 2020, CU Boulder choirs will occupy the Gamm Choral Faculty Studio.

“We wanted to support the building and chose this area to do it. One of the strengths of the college is the voice and opera department,” Gordon says.

Gordon Gamm, who grew up in Louisiana and practiced law in Kansas City before moving to Boulder in 1993, says music has always held a special place in his heart.

“My father played trumpet at the same high school I went to,” he says. “My parents told me that when I was 3 or 4 years old, I would listen to the radio and bounce up and down to the music. When I was 5 or 6, I began piano lessons.”

Growing up, he says his piano teacher taught him to play by ear and enjoys playing old songs for sing-alongs with friends. He was first chair trumpet player and student conductor in his freshman year in high school, played in the honors band at Interlochen, and even made a name for himself jamming for fun in Kansas City bars. Now a retired attorney, he has devoted himself to supporting causes that he says ring true to his humanist ideals.

“Humanism as a philosophical perspective seems to be the best guiding light for how I live my life,” Gamm says. “It’s a belief that we can make value choices based on how we affect other people, rather than based on scripture or God’s agent on earth.”

Among those causes: bringing interdisciplinary studies to CU Boulder’s College of Arts and Sciences, addressing food insecurity among local school children, and making it possible for low-income parents to send their children to daycare.

The longtime Boulder Rotary member and founder of the Boulder International Humanist Institute says the common thread is a sense of justice for all.

“It’s really satisfying to see a program I helped start have a long-lasting impact, because I felt there was something unjust that needed to be attended. Justice is a major word that embodies my life as a lawyer. And I see the law as a vehicle for resolving moral conflict.”

Music and the arts, Gamm says, reflect the transcendent aspect of religion, the metaphysical aspect of philosophy. “When I was struggling with doubts about whether God existed, I didn’t want to give up that connection because God represented an emotional connection with something greater, more awesome than the mundane, ordinary aspects of life. Then a friend suggested that I only found resonance with things I don’t understand, simply because I don’t understand them. He said that there’s no reason you can’t attach that same sense of awesomeness to a walk in the park, the overwhelming beauty of the cosmos, the birth of a child—or the great beauty of music. It is the inner life that is the source of bewilderment rather than invisible spirits. This aspect of humanism resonated with me. Music fits into that realm of transcendence.

“You can get just as emotionally charged by a beautiful poem or performance that challenges your thinking and makes you see new ways of understanding the world you’re living in.”

So for someone who almost always has a tune in his head, guiding him through his days, Gamm says part of giving back to a community he’s loved for 25 years must include a nod to that important piece of him.

“Music is part of what it means to be human. The creative instinct that flourishes within us is a manifestation of us as human beings and as our best selves. To me, I think that to live life without art is to have a lifeless experience that could be duplicated by machines. Music makes us uniquely human and reflects why the arts are of special importance to me, providing life with a sense of resonance and awesomeness.”

Olivia Huizar Conner shares how her background inspires her to promote Diversity, Equity and Inclusion (DEI) in music. END_OF_DOCUMENT_TOKEN_TO_BE_REPLACED

Alumna Annie Booth shares how the College of Music continues to impact her career as an award-winning jazz pianist, band leader, composer/arranger and educator—and offers valuable career advice. END_OF_DOCUMENT_TOKEN_TO_BE_REPLACED
Return to the top of the page