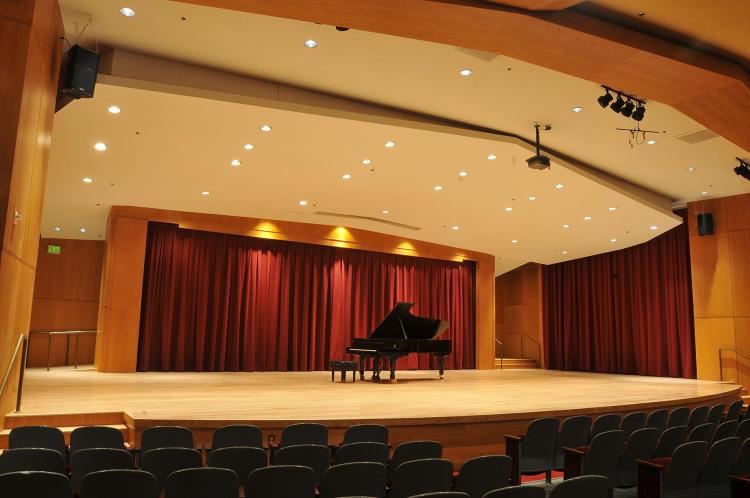 A cross-cultural collaboration in Grusin Music Hall is being recognized with one of the biggest honors in music. When the 2019 Latin Grammy Award nominees were announced last Tuesday, Mexican pianist Edith Ruiz’s album “Árboles de Vidrio” was named in the Best Classical Album category. It’s a project that came to life atop the golden oak stage of Grusin Hall.

“The place has wonderful acoustics and great people to work with,” Ruiz says.

The story began back in September 2017, when Ruiz was in Boulder with the Ónix Ensamble as part of the Pendulum New Music series. Ruiz remembers the exact date.

“We arrived to Boulder the same day there was a big earthquake in Mexico City,” she says. “My colleagues and I were scared, sad and distressed, but we could not go back to CDMX, so we did our best during our stay at CU.”

She says she and the rest of the group fell in love with Grusin’s newly restored Steinways and the resonance of the hall. She immediately started scheming about a way to come back.

“I remember talking with Alejandro Escuer, the flutist and artistic director of Onix. I said, ‘Wouldn’t it be great to record here? It is a shame it is so far away from CDMX.’  But then we thought, why not give it a try?”

With the support of then-Composition Chair Daniel Kellogg, Ruiz made plans to return to Boulder in January 2018 to record her latest album. College of Music Recording Engineer Kevin Harbison and Senior Piano Technician Ted Mulcahey lent a hand: Harbison did the recording and editing, while Mulcahey voiced, tuned and regulated the piano used in the recording.

“It is an honor when a high-caliber artist such as Edith comes here and loves one of our concert instruments—especially enough to come back and make a recording of this level,” says Mulcahey. “We work very hard to keep the pianos under our care in the best condition possible, especially the performance instruments in our halls.”

Adds Harbison, “There is some very, very challenging music on this CD and she really pulled it off. She's an amazing talent and I'm glad that she is getting some well-deserved recognition this way.”

“Árboles de Vidrio” was released in June of this year on the Urtext label. A few months later, the 2019Latin Grammy nominees were announced. Ruiz wasn’t expecting any big news.

“I was teaching at the music college at the National Autonomous University of Mexico,” she recalls. “I took out my phone to use the metronome when I saw a message from Alejandro and [Mexican composer] Gabriela Ortiz saying, ‘Great news! You have been nominated!’ It was a big surprise.”

As for the College of Music, Harbison says this nod to the facilities at Imig Music Building comes at a perfect time.

“I just see it as the next step as the College of Music heads into its second century of existence.  We've known for a long time that we have world-class faculty here, so it's nice to see our facility starting to get recognized.

“And the new building addition will bring even more improvements!”

Ruiz says the album and the recognition it’s received are a testament to the power of classic contemporary music and the talent of the people who came together to record it nearly two years ago.

The 20th Latin Grammy Award winners will be revealed on Thursday, Nov. 14. See the full list of nominees on the Latin Recording Academy website.

It was a busy fall for the American Music Research Center (AMRC)! One of the... END_OF_DOCUMENT_TOKEN_TO_BE_REPLACED

Friends, My heart is heavy. Associate Professor of Violin Charles (Chas) Wetherbee passed away on... END_OF_DOCUMENT_TOKEN_TO_BE_REPLACED

Longtime Associate Professor of Saxophone Tom Myer retired in May. As the year draws to a close, enjoy his insightful career reflections and advice … and discover what he’s up to now! END_OF_DOCUMENT_TOKEN_TO_BE_REPLACED
Return to the top of the page