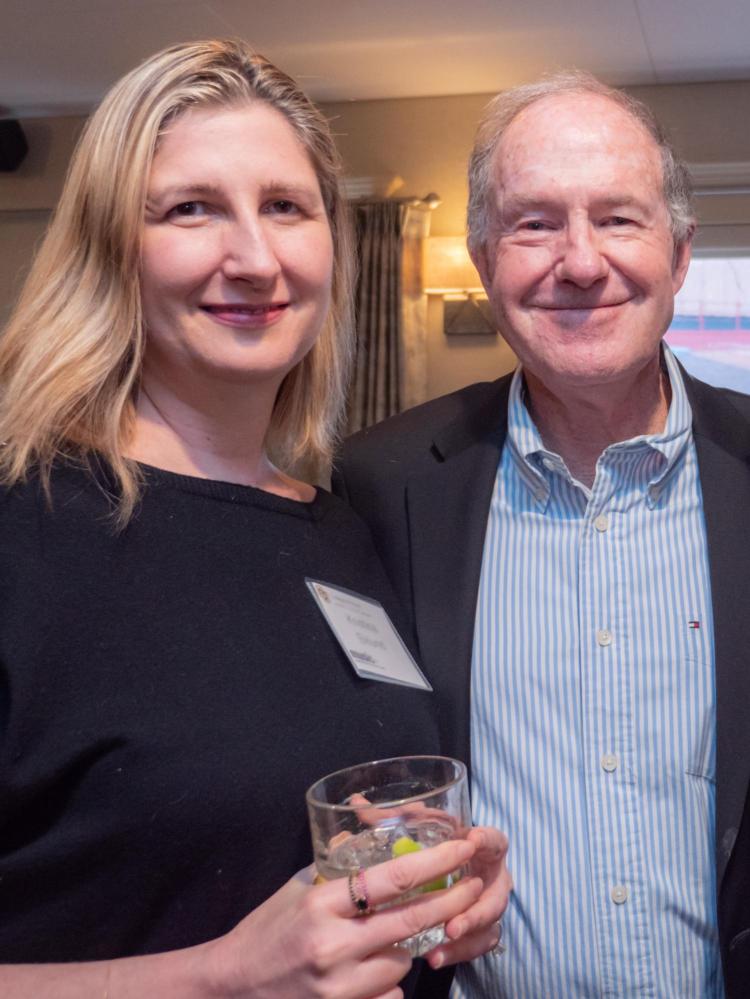 Kristina and Paul Eklund at the College of Music groundbreaking celebration in February 2019.

Paul Eklund has been vocal about the role music has played in his life—despite never having been a professional musician himself. He can remember distinctly attending operas with his parents while he was growing up in San Diego. Some of his most memorable conversations in college and during active duty as an office in the United States Navy revolved around music and the effect it has on us.

Then in Boulder, he met his wife Kristina as part of a meditation and spiritual community whose practices include chanting.

It’s only fitting, then, that the Boulder real estate developer—namesake of the College of Music’s Eklund Family Opera Program—be prescribed opera singing when he needed to strengthen his throat muscles.

“I was amazed at the power I can get with my voice,” he says. “It’s fun to experience this part of life. I am so taken by the singing.”

Eklund, who is a member of the College of Music Advisory Board, endowed the Eklund Family Opera Program in 2014. Now, on the eve of the opening of the new wing of Imig Music Building, Paul and Kristina will give $65,000 to name the new Eklund Percussion Practice room.

“Drums are like the beat of the human heart,” Paul says. “I never imagined myself focusing on percussion instruments: my favorite instrument is violin. But percussion has such a strong beat.”

In fact, the significance of the gift can be tied back to some of those deep conversations Eklund had in college. “I had a discussion with some friends one night about why people like music. We concluded that it was physical—like the rhythm of our hearts was synchronized with the music. That really stuck with me.”

Kristina, too, has been shaped by the physical power of music. “Music was a big part of my teenage life,” she says. “I spent a lot of time in gay bars in Key West with my best friends dancing to new wave and disco music in the 80s. It was a big help having music in my life when 12 of those friends passed away. Music helps me process difficult emotions.”

Now the Eklunds, for whom music is an undercurrent in a life of yoga, business and writing, want to do what they can to make sure College of Music students have every opportunity to succeed and share their passions with the world.

“I felt it was part of our duty to do something for the school,” Paul says. “And now, with the building, we get to see the gift go toward something that will last a long time and affect a lot of people.

“Music is a big deal in the world, and I’m so happy to see these students learn and gain confidence in what they’re doing.”

“Having a named room sends a message that people you don’t even know—people you may never meet—care about you and your success,” Kristina adds. “That the world needs your beat, your voice, your rhythm.”

Olivia Huizar Conner shares how her background inspires her to promote Diversity, Equity and Inclusion (DEI) in music. END_OF_DOCUMENT_TOKEN_TO_BE_REPLACED

Alumna Annie Booth shares how the College of Music continues to impact her career as an award-winning jazz pianist, band leader, composer/arranger and educator—and offers valuable career advice. END_OF_DOCUMENT_TOKEN_TO_BE_REPLACED
Return to the top of the page